But the Harahan native and long-time Slidell resident still cooks Louisiana style. So does his mom Debby, who made her weekly jaunt up the country to visit grandkids and decided to make her favorite salad for us while John cooked his corn and crawfish soup.

Debby grew up in the New Orleans suburb of Kenner, but her father’s parents were north Louisiana folks, residing in Summerfield in Claiborne Parish. That’s at least partly where her cooking style originates.

“John (her husband) and I have different cooking styles,” she explained. “He cooks Cajun. I cook country — roasts, rice and gravy, and fried chicken.” Some of her cooking style came from her mother Glenda Bays too, who was originally from Melville.

“She was an excellent cook.” John Sr., sitting nearby nodded his head emphatically in agreement. “She could make a hubcap taste good.”

“Now I avoid cooking a lot,” Debby volunteered. “I have an excellent cook at home,” she snickered, referring to John Sr., her husband.

John Jr. shook his head at his mom’s comments, “She was always a good cook. I wasn’t fat for no reason.” The fishing guide had filled out to 280 pounds before losing a third of his weight — and keeping it off.

The move to Mississippi

“My wife Kelle and I already had horses when we lived in Slidell. We just decided that we wanted to be with them all the time rather than have to run to see them.”

The couple has 5 horses on their 24 acres.

Each step seems to take them further from the heart of New Orleans. The move from Harahan to Slidell occurred because Kelle had a Slidell job. Slidell is situated on the eastern end of Lake Pontchartrain.

With his interest in fishing, it was a natural step for John to get his charter captain’s license in 2008. The business name, Therapy Charters came from Kelle’s occupation as a child counselor.

Our original slogan was, “come relax with us,” he grinned. “To my knowledge we still have the only handicapped-accessible charter boat in the area.”

As for his culinary skills, John gives credit not only to his mom, but to his father and his grandmother Glenda. “She was a country cook — cast iron skillets for cornbread and all that.

“I really got to be a cook by cooking with my dad at deer hunting camps. He does things like sauce piquants, gumbos, étouffées; things like that.”

As for big John’s cooking; stay tuned. We plan to cook with him in the near future.

Debby Falterman first ate a salad similar to this one at a Mother’s Day brunch at Ginny Galpin’s house. “It was delicious,” she exclaimed. “So I got the recipe from her. It’s sweet; it’s salty; it’s crunchy.

“It’s just a simple little salad with Asian ingredients,” she added modestly. “We serve it for every holiday or family main event, usually as a side salad.”

“It’s quick and easy,” chimed in her husband. “There are never any leftovers to store.”

“It’s usually the first thing to go,” agreed her son.

Debby has a couple of tips. Do not pour the dressing over the salad until ready to serve as it will cause the salad to become wilted. Also, be sure to allow the noodle mixture to cool completely before adding to the salad.

Fry the bacon until it is crispy. Remove from heat and set aside to cool. Mix noodles, almonds, and sesame seeds in a pan and toast in a 350 degree oven for 10 minutes. Set aside to cool. Combine 1/2 cup oil, sugar, vinegar, salt, pepper, and onion in a small bowl. Mix well to blend and set aside. Cut lettuce into coarse pieces and break the pieces into bite size. Place the lettuce in a salad bowl, and crumble the bacon into it. Add the noodle mixture, toss, and set aside. In a small bowl, beat the eggs and milk to make a wash. Dip the oysters in the egg wash then dredge them in the fish fry. Fry at 350º F until golden brown. Spoon the dressing over the salad and divide it onto individual salad plates. Top each salad with 4 to 6 oysters. Serves 4-6. 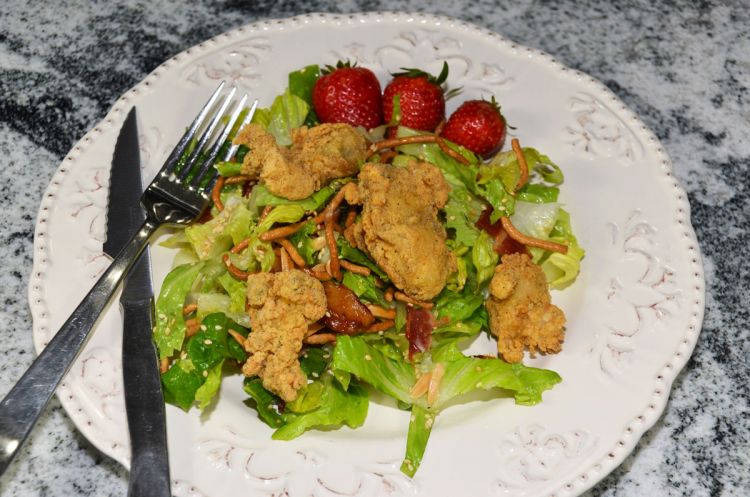 This is a really quick and easy recipe. Like so much Louisiana home cooking, it relies on a cream soup, an effective short cut. Food snobs try to look down their noses at canned cream soups as an ingredient, no matter how delicious the end result is.

Of course, a lot of them don’t cook. They just eat — and criticize!

John says that he has been cooking corn soups for 20 years. He used to use shrimp, until he had some crawfish left over after a boil and decided to use them instead. It worked!

“Use leftovers if you have them,” he coached, “but if you don’t have them, the recipe has liquid seafood boil in it to give the same seasoning pop.”

John cooks this recipe 4 to 6 times a year and doesn’t have a written copy. “I know the main ingredients and I just add other ingredients to taste,” he says.

A couple of tips: First, when using leftover boiled crawfish you may want to remove the seafood boil in this recipe since the crawfish are already seasoned. Secondly, this recipe will work with any kind of seafood, so feel free to experiment.

Sauté the onion tops and garlic in butter until tender. Add the cream style corn, whole kernel corn, cream of mushroom soup, crab boil, crawfish, mushrooms, heavy cream, and half and half. Simmer over medium heat until the soup reaches the desired thickness. Serves 15-20.