Last month we spent time in the kitchen of John Falterman, Jr. to cook with him and his mother Debby. During the whole caper, Johnny Falterman, John’s father sat off to one side, mumbling over and over, “I love to cook. I just love to cook.”

We couldn’t resist the hint and a few weeks later we invaded Johnny’s home kitchen in Harahan. It was worth the wait!

Sporting a silver receding crown and full goatee, the 64-year-old was humorous and animated. If you tied his hands, he would have been tongue-tied.

“He even talks with his hands when he is on the phone,” laughed wife Debby.

Calling himself “semi-retired,” he still owns Johnny’s Welding Service in Kenner, but isn’t there regularly every day. The business played a major role in his development as a cook.

Until 25 to 30 years ago, Debby did most of the family’s cooking. Johnny got started cooking doing the “male thing,” as he called it, grilling at home and cooking at a hunting camp in north Louisiana.

“If you weren’t cleaning a deer, you cooked,” he said. “North Louisiana people don’t use a lot of seasoning — onions and that’s about it. My father-in-law Gene Bays, Sr. didn’t believe in seasoning. Some of his cooking was good; some not so good.

“He made a good squirrel or deer mulligan, a dish called ‘plum goodin,’ and deer steaks in brown gravy. As he got older, I mimicked everything he cooked, but with more seasoning. Then I fine-tuned my cooking by going to camps in other states. I’d cook and they would cook, and we would compare notes.

“I liked watching people enjoy my cooking, so it was natural for me to cook at home after leaving the camp. I put in a complete kitchen at my shop. I cooked red beans and rice, gumbos, sauce piquants.

“We had a wild game end-of-the-year cook-off right before each new hunting season. All the hunters I know would bring in their game: sausage, deer, moose, elk, caribou, antelope, black bear and ducks.

“I would do the cooking and make five or six different dishes. Ten or 15 people would come — all men. It was an all-day event, eating and story-telling.

“I cooked every day at the shop too. It actually cut my costs down. I was losing a half-hour per man per day. I would give them a half-hour off for lunch. It always lasted an hour. I had between 7 and 15 employees.

“They were grateful for the hot meal too.

“I think that I invented beer can chicken there 35 years ago. We cooked a lot of game and a lot of crawfish. I would enjoy cooking at the shop because it took my mind off of what could happen or might happen.”

Early in Johnny’s cooking career, Debby was at loss for what to give him for a birthday. “So I gave him a 6-week course on Cajun cooking at Delgado Community College,” she smiled. “He didn’t like the first night — he had kitchen duty.”

“The second day I learned how to cut up onions without crying. Let someone else do it! But it really was worth it because of what I learned about making sauces.”

“He liked it so much, I gave him a second class, an advanced class on sauces and spices,” she chirped.

“I quit cooking. He would stand over me and tell me how to cook. He is the primary cook — probably for 20 years. He likes to do it.”

“Now I don’t cook at work anymore,” Johnny said with a note of resignation in his voice. “I cook at home and at the camp. We cook big meals at home on Mondays, Tuesdays, and Thursdays.”

“The other days,” piped in Debby, “except for eating out once a week, we eat leftovers. He’ll cook 2 pounds of red beans at a time — and there are only two of us.

“Who are we feeding? I don’t even go to the grocery anymore. Johnny sent me to get some cooking oil recently. I had to ask for directions in the store,” she laughed.

Crawfish and Crabmeat a la Johnny 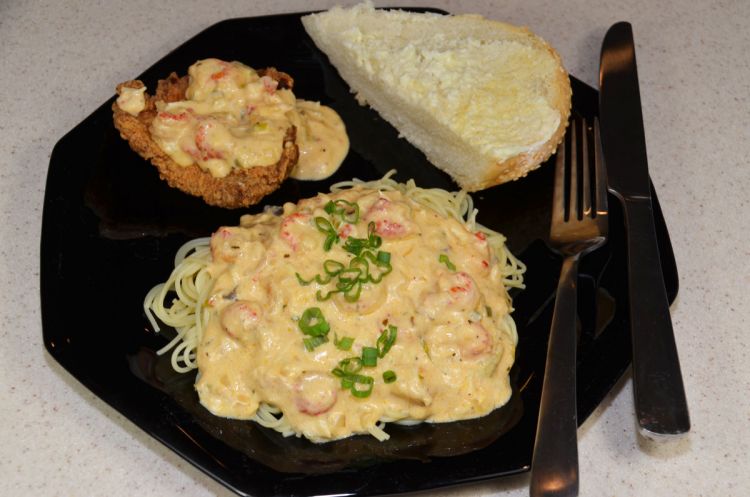 “This is a fast dish,” said Johnny. “You cook it and move on to making your pasta and your salad. It is something that I originally threw together at the welding shop. Using the canned cream soups is simpler than making your own soups and bases.

“Velveeta worked its way into the recipe when the dish was too watery once. I threw some in to tighten it up and I liked it. It’s good without the Velveeta, but if you eat it with the Velveeta and then without, you’ll say, ‘I want the Velveeta.’”

This dish can also be thinned and served as a soup.

The appearance of this dish is almost spoiled by spreading crawfish over it. Johnny says that this dish is one that everyone at the hunting camp loves, where he often serves it as a large side salad, without the crawfish.

“This recipe is famous at all the hunting camps I go to in Louisiana, Mississippi and Alabama. They say, ‘Look how fancy.’

I throw everything in it. The recipe came out of my head. I wanted something pretty. To me it ain’t fancy, but when I make food, I want it to look good.”

Place the shredded lettuce in a large bowl. Spread the Manzanilla, Calamata, and ripe olives and carrots over the lettuce. Place the sliced onions around the outer edge of the bowl, facing from the edge of the bowl pointed toward the center Put the cheese strips between the onion slices. Place a half of a grape tomato on each cheese strip. Sprinkle the pepper rings around the salad. Cut the medium tomato into quarters and place in the center of the salad. Serve with your favorite dressing. Serves 6-8.