Yes, she cooks with sauces — lots of them. But her background is interesting too. She grew up as a New Orleans Creole.

We asked her about her ethnic background and got more than we expected. “I’m predominantly French, Spanish, Choctaw Indian, and African,” she replied. “It’s probably easier to mention what I don’t have. I have no Asian, Italian, or Middle East in me.”

We knew that the word “Creole” meant a lot more than just a hodgepodge catchall term that had some vague connection to “Cajun.” Rather, it defines a racially mixed culture in New Orleans that has its own society, culture and identity.

“Creole society back then (when she was young) was very structured,” she explained. “On paper in the 1950s, you were either legally black or legally white.

“There was a pecking order in society. Creole was better than black, but they weren’t white. Mom and Grandma told me never to date someone darker than (the color of) a Schwegmann’s (grocery store paper) bag.”

Laina came out as a Creole debutante in 1973 with the Young Men Orleanian Social and Pleasure Club. Her mother’s mother, Eva Manade’ Fonvergne, taught her how to cook. “She cooked French Creole and used a lot of sauces and gravies. She taught me patience in cooking. ‘Let the flavors combine,’ she would say.”

Another big influence on Laina’s cooking was her father’s Aunt Carrie Harlow from Pointe Coupee Parish and Baton Rouge. “She had a 210-acre farm and seven shotguns lined up in a row. She called them her ‘husbands.’

“She cooked country style. From her I learned the value of fresh ingredients. She wrung chickens’ necks, milked cows, made butter, and grew vegetables. My sister and I would spend summers with her.”

She started cooking on her own at 15 years old for her parents who both worked. Married at 18 into a military lifestyle, she moved immediately to Oklahoma. People there would say, ‘Here, cook this,’ or ‘Here, cook that.’

From there it was to Colorado and the cooking thing was repeated. “They would bring me meat to cook. They didn’t know how to use seasonings, just salt, pepper, and maybe an onion.”

After returning to her roots in Louisiana, she met her current husband Steve on Loyola Avenue in Kenner, when they responded to the same accident. “I was a paramedic and he was a rookie cop. We both tried to take charge.

“For three  years, I bumped heads with this rookie cop. We fought a lot — playfully.”

After their retirement in 2016, they moved to their spacious country home on 27 acres outside of Franklinton. The property has a big workshop, an in-ground pool, two ponds, two food plots for deer, a veggie garden, and four dogs.

But the kitchen is hers. “I don’t like him in my kitchen. He makes a mess and he can’t make a gravy. He cooks outside.

“I love to play in the kitchen,” she cooed. “If you are from New Orleans, you can’t do anything without food.”

Laina has been making this dish for 20 or so years. She often makes it with a double-size batch with 2 pounds of tails, calling it a “family dish,” because it serves so many people. 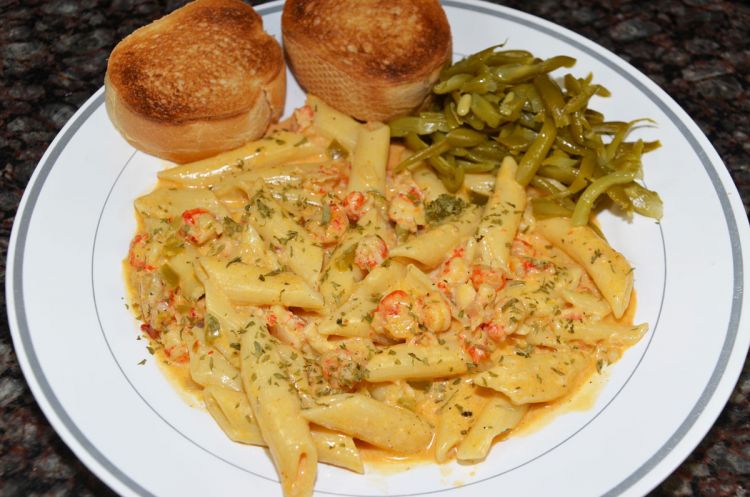 She likes to use crawfish leftover from a crawfish boil for this, noting that leftover crawfish tails can be used to make good omelets.

“A Monica is about the sauce,” she exclaimed while waving a cooking spoon. “This sauce is one that my grandmother made. She called it ‘the cream sauce.’ I was told that the Crawfish Monica sold at Jazz Fest is similar so I borrowed the name.”

She cooks this dish often — at least twice during Lent, when she cooks a lot of seafood “like a good Catholic.”

This delicious sauce is versatile and can be used with chicken or shrimp, as well as crawfish. Best of all, it is simple.

Prepare pasta according to package directions, drain and set aside. While pasta water is heating, melt butter in a skillet over medium heat. Add onion and sauté until transparent, stirring often. Add bell pepper and sauté until tender. Add garlic, paprika, and creole seasoning to onion mixture and stir to blend. Pour in the heavy cream and stir to mix well. Stir in the crawfish making sure to add any fat from the package for added flavor. Turn heat to low and cover. Simmer for about 45 minutes until the sauce thickens. Stir often to prevent the cream from separating from the butter. Serve over pasta. Serves 6-8.

Laina’s first memory of eating a dish like this is 50 years ago. She is aware that Pascal’s Manale in New Orleans invented a dish by this name in 1913, but has never eaten it.

The principals of cooking the two dishes are the same, but the results are entirely different. Pascal’s Barbeque Shrimp are cooked in a peppery butter sauce.

Laina’s version contains butter, of course, but it doesn’t seem to dominate as much. It is also spicier than the Pascal’s Barbeque Shrimp.

“The variations of barbeque shrimp come in the ratios of seasonings, mainly lemons to garlic,” she explained. “The juice (the shrimp are in) should be spicy — garlicy and peppery. You should want all the juice.”

She dipped a piece of French bread in the sauce, licked her fingers and whimpered when she tasted it.

One thing she doesn’t like is short cuts. Disdainfully waving a pack of River Road Barbecued Shrimp Seasoning that someone had given her, she fairly sneered, “I tried some of this once. The seasonings stay hard. They don’t break down, so you have crunches of pepper. I gave up on them. I don’t want to taste the seasonings; I want to taste the juice.” 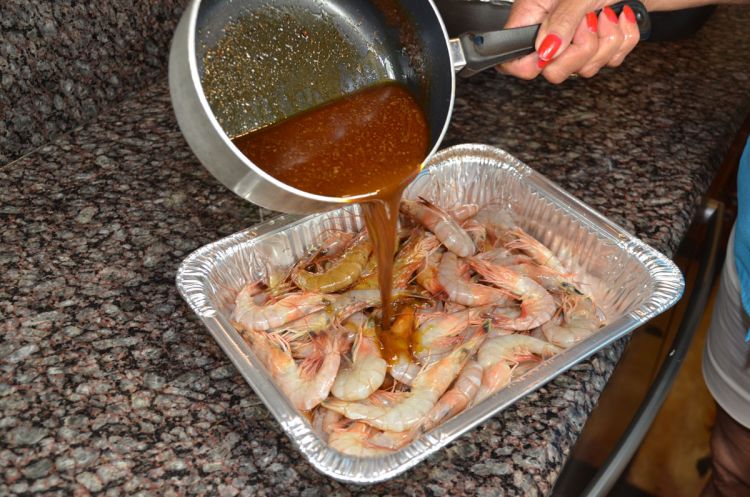 Place the shrimp in an oven-safe pan. Melt the butter in a skillet. Add all ingredients except the shrimp and simmer 15 to 20 minutes until the sauce thickens. Pour over the shrimp and bake at 350ºF for 35 to 40 minutes. Stir two or three times during baking to coat the shrimp with the sauce. Serve with lots of French bread. Serves 4-6.