Don’t get caught inadvertently hunting over a baited field

A dove season seldom goes by without wildlife enforcement agents issuing citations for hunting doves on baited fields. Baiting is not so prevalent anymore due in large part to good enforcement work combined with better education and information available to hunters and landowners. But there remain those who will knowingly violate the regulations and there are those who will get caught on illegal bait because they didn’t know better or did not understand the law.

For the sake of the latter we can take a brief look at what is and is not legal and how to tell the difference. First, we must understand that a baited area is any area “on which salt, grain, or other feed has been placed, exposed, deposited, distributed or scattered, if that salt, grain, or other feed could serve as a lure or attraction for migratory game birds to, on or over areas where hunters are attempting to take them.” In addition, “agricultural areas must be prepared in accordance with official recommendations to be legally hunted.”

Since most of the confusion involves agricultural areas, we can focus on those. For the sake of explanation, let’s divide them into three groups: mowed fields, harvested fields and planted fields. Mowed fields include hay meadows or crop fields where grain or seed grown on the field is scattered on the ground as a result of mowing. Hay meadows or fields where natural vegetation has grown and the plants have seeded immediately come to mind. In addition to these are fields where sunflower, millet or other crops have been planted and grown to maturity, then mowed. All may offer good and legal dove hunting so long as additional seed or feed is not brought in and scattered on the field. 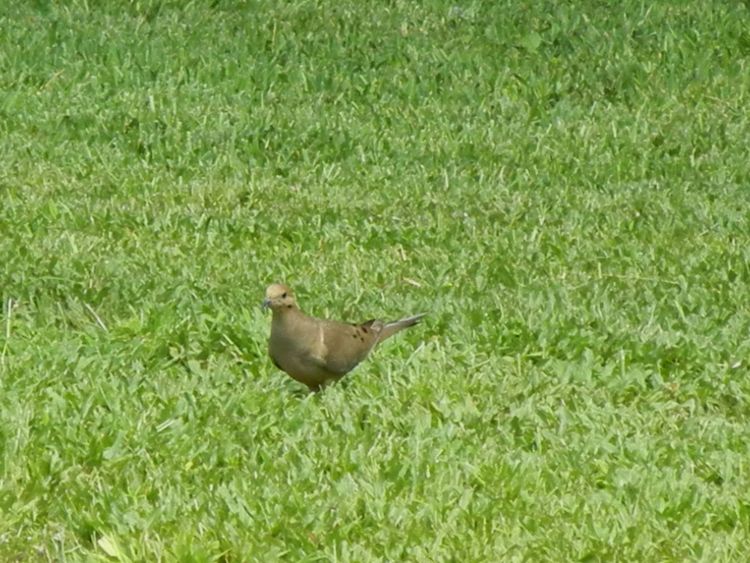 Next are harvested fields where grain crops such as corn, rice or milo were grown. Grains scattered as a result of harvest in such fields will really bring in the birds and offer good shooting. Again, so long as the only grain present is that grown on the field with no additional grain brought into the field, we have no problem.

Our final group for discussion is planted fields and this is where things get a bit tricky. Some of the more common baited areas I have worked fell into this category. They were areas where someone decided to bring in a large quantity of wheat or other seed doves find desirable and dumped or scattered it over unprepared or poorly prepared ground. This was in turn followed by additional applications of seed as doves and other birds consumed the seed. In other areas rain would cause the seed to germinate and sprout. It would be growing which is what one would want if planting and growing a crop were the real objectives. But when bait for doves was the intent, more seed would be brought in and scattered on the already sprouted and growing field.

This is not to say that doves may not be hunted over early fall plantings in food plots, pastures and wheat fields, so long as these areas were prepared in accordance with official recommendations. Those recommendations are provided by state cooperative extension services and include recommended planting dates, proper soil preparation and seed rates per acre.

Be on the safe side

My advice to dove hunters comes down this: 1. Do you know if the field is baited? If it is and you know it, don’t go. 2. If you are invited to hunt a field and know nothing about how it was prepared, ask if it is baited. 3. Even if you are told a field is “legal” go out and look around. If it is freshly disked or chopped, kick the soil over and look for seed or feed. If you don’t like what you see, don’t hunt.

A good dove hunt is a lot of fun and a great way to kick off the fall hunting season. So make sure your dove hunt does not end with a violation citation instead of birds in your bag.