Derek Logan is a modern Louisiana outdoors Renaissance man, a person with many talents or areas of knowledge. As a Louisiana game warden he’s a professional outdoorsman.

When he’s not working in the outdoors, he is playing there, spending much of his time fishing and hunting. Then he brings his bag home and waves his magic Cajun chef’s wand over it and transforms it into delights for the table.

The Abbeville resident and native said flatly, “I love to eat,” adding that he and his wife like to entertain, but not stuffed shirt formally. He called it “cooking and hanging out.”

Derek doesn’t do this alone. His lovely wife Rebecca is his co-cook. She grew up cooking with her grandmother, Lorene Jeffrey, who she said is “from the North.” Her cooking was meat and potatoes, dumplings, and butter beans.

Mom Gloria Stanley was also a cook. “When we got off the bus,” said Rebecca, “there was a hot meal on the table for us every day at 3 p.m.

“I loved it. My family laughs, ‘I swear you were born a Coon-ass.’ I’m the only one in the family who adapted. I continued to cook Cajun style when I met Derek. I met Derek and we take turns cooking. On his days off, he controls the cooking. When he works, I cook.

“We don’t do box meals (‘crap’ interjected Derek sarcastically) or Rice-A-Roni. We cook any type of meat from the start.

“We love to have people over. Derek cooks the big pot. I do the sides. It’s definitely teamwork.”

As for Derek, he’s spoiled by his close-knit family.

“My Grandma Ethyl Logan raised 5 kids (including Dad). She cooked for them every day. She raised me after my mother died when I was 3, until I was 9. She made the best fried chicken you could ever put in your mouth.

“Whatever I wanted, she would cook. She would sit on a tall chair by the stove and stir. The more you stir, the better it is. My saying is, ‘if you’re not making noise, you’re not cooking.’

“My dad Donald is very good. To this day, I’ve never eaten a beef or pork roast as good as his. He makes his own vegetable stuffing. He makes the best duck gumbo. Rebecca will do anything for it. I learned the most from him.

In the military, I have been half-way round the world. I’ve eaten in Europe, Asia and South America. I’ve eaten all over. So when I say food is good, it’s worth eating.”

A legacy passed down

Derek’s maternal grandmother, Melba LeBouef Frederick, owned and operated the Park Restaurant in downtown Abbeville for 33 years. Although she sold it 12 years ago, the quaint 12-table restaurant is still constantly busy.

It was known for its hamburgers, fried shrimp po-boys, and gumbo. It was voted as having the best hamburger in town every year that it was open. Fresh meat is why. Derek pointed at Richard’s Meat Market, located diagonally across the street.

Derek is well-armed to cook. He explained. “I have an Aunt Vickie Frederick who offered to buy everything I need for cooking before she dies: a Cajun microwave, a fleet of iron pots, a custom boiling rig, a custom aluminum gumbo pot.

“She has no kids. With the equipment she bought for me, her name will live on with me.”

Derek gave me this recipe verbally while we were jug-lining for big blue catfish. I went home and we tried and loved it. I called Derek to compliment him and he said that mustard just does something to that fish.

Oh-oh, I used mayonnaise. It was great — a by-accident recipe. 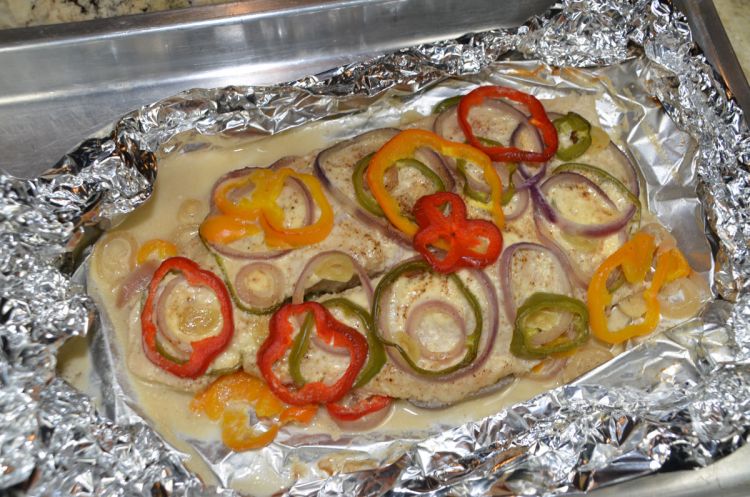 This recipe is “falling off a log” dead simple.

Wash the fish fillet and pat it dry. Season one side of the fillet with Creole seasoning. Generously spread mayonnaise over the same side. Make a bed of vegetables with half of the onions, peppers and garlic on a piece of aluminum foil large enough to fold over the fillet. Lay the fillet, seasoned-side-down on the vegetables. Spread mayonnaise on the second side of the fillet and season it with Creole seasoning. Fold and seal the foil over the fillet to make a tent. Bake for 45 minutes in a 375 °F oven. Unfold the foil and bake 10 more minutes. Serve directly from the foil. Serves 4.

We added a recipe here of our own to compliment the Logans’ recipe. When Glenda and I got married 44 years ago, both of us came from families that did very little with fish but fry them.

Glenda, with her Cajun background, had an occasional courtbouillon, and I didn’t even get that as a meat-and-potatoes German. This was my first attempt at something besides frying.

The basics of the recipe were something that I fished out of a 1956 Florida Department of Agriculture cookbook, Florida Seafood Cookery. The booklet, which we still have, is pretty cool; it has sea turtle recipes in it and in true Florida fashion, every crawfish recipe in the book refers to spiny lobster.

The original recipe didn’t specify bream; it just said “fillets.” But bream was what I had on hand and they really worked. The tiny fillets rolled up so beautifully. This recipe opened a whole new world of fish cookery for us.

If another species of fish with larger fillets is used, split the fillets lengthwise so that the rolls are not too wide to sit nested in the milk.

Preheat oven to 350 degrees. Roll each fillet, secure it with a toothpick, and place it on-end in a shallow 2-quart casserole. Pour the milk over the fish rolls. Sprinkle with salt and pepper. Bake about 30 minutes or until the fish flakes easily when tested with a fork, but is still moist. While fish is baking, grate the cheese coarsely and melt the butter. Remove the casserole from oven and turn the oven to broil. Remove the milk from fish and save it. Stir the flour into the butter, then slowly stir in the milk. Cook over low heat, stirring constantly until sauce is thickened. Add cheese and stir until melted. Add lemon juice and Worcestershire sauce. Pour sauce over baked fillets and sprinkle with paprika. Brown the fish lightly under a broiler. Serves 6-8.