His job is cooking. He is executive chef and general manager of Crawfish Town USA, a Henderson-Breaux Bridge seafood landmark.

After fishing (see Butte La Rose Bailout), we headed right for the kitchen to prepare some of our catch.

He had a surprise, too.

“I’ve got some really good tripletail in at the restaurant right now,” he said. “Let me cook some of that, too.”

I didn’t argue. I love tripletail as much as freshwater catfish, if not just a little bit more.

Dustie’s background is a combination of formal culinary training and country Cajun cooking. Way before he attended the Louisiana Culinary Institute, he cooked with his grandparents, Jackie and Wiley Latiolais of Cecilia. They cooked from scratch every day.

He remembers having to stand on a stool to stir the pot. When he got old enough to go to his grandfather’s deer camp near Krotz Springs, he used to peel potatoes and onions.

“That was my first real job cooking — doing the grunt work that they didn’t want to do. I was about 9 or 10,” he remembered. “After a couple of weeks doing that, they let me stir the pot. I was excited about them letting me do something. I was the only kid at the camp interested in cooking. The others were all gone riding four-wheelers.

“The epiphany was when they let me make the first roux late in the season. I said, ‘This is cool!’ Poppa was an expert on any dish. I started to cook more with Granny. I would cook for adults and my friends that came to the camp. A big thing was smothered deer cooked outside on a burner — rice and steak gravy, corn maque choux and smothered potatoes or turnips.”

Dustie got his first job cooking at a restaurant at 14 at his great uncle Pat Huval’s restaurant, Pat’s Fisherman’s Wharf in Henderson. From there it was steady up the ladder, with each job offering new learning experiences and responsibilities.

One of the fun things about cooking informally with a chef is that they often improvise as they go. That’s what Dustie did with these two recipes.

For the Creole seasoning ingredients listed in the recipes, he naturally used Crawfish Town USA Seasoning, but any Creole or Cajun seasoning blend can be used. 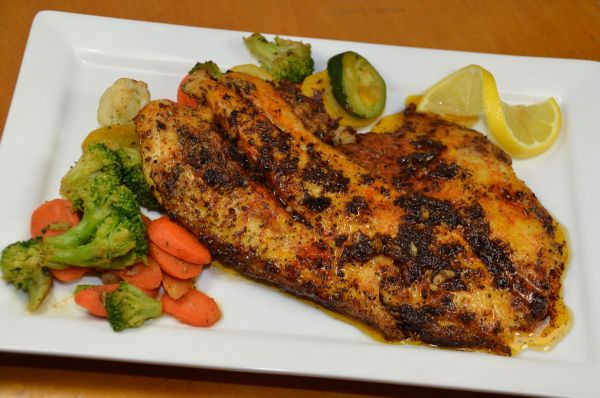 Tripletail are saltwater fish that are sometimes called “blackfish.” In their own way, they resemble giant sac-a-lait. They taste as good, too: mild and white-fleshed. While Dustie used tripletail in this recipe, any firm-fleshed fish with white meat will work, including bass, large crappie, snappers, black drum or redfish.

The focus of this dish, made with a brown butter, basil sauce, is on the fish. It doesn’t have too much basil nor too much garlic. Basil, of course, is the ultimate fish herb.

Finishing the fish in the oven rather than on top of the stove retains the moisture in the fillets.

Preheat the oven to 350 degrees. Wash the fillets and pat them dry. Put ¼ pound of butter, basil, black pepper, garlic and salt in a large oven-proof skillet to melt the butter and blend the seasonings. While the butter is melting, liberally sprinkle both sides of each fillet with Creole seasoning and pat it into the flesh by hand. Add the fillets, skin-side up (presentation side down) to the skillet and sauté over medium heat for five minutes. Shake the pan often to prevent sticking. Gently turn fillets over and cook other side until nearly done. Put the skillet in the oven for three to four minutes to finish cooking the fish internally. While the fish is in the oven, add 2 tablespoons of butter and a double squirt of water to the skillet. Scrape the fond lose from the skillet while heating it. Remove the fillets from the oven and plate them. Drizzle the butter sauce from the skillet over the fillets as desired. Serves 4.

Dustie got artistic with this recipe — it’s exotic-looking, although simple as pie to make.

“About the head on the fish,” he explained, “people wonder about the authenticity of what they are getting. They are wary of product substitution. There is no mistaking this fish for another.

“I keep recipes simple, both at work and at home. People should be able to easily understand a recipe. Plus, I want the main ingredient to showcase itself.”

Making the crab-meat stuffing is perhaps more work than the finished dish, but is so worth it. This is also an excellent recipe for crab cakes.

Dustie’s lemon-butter cream sauce is a jewel. We have used it on everything from steamed vegetables to grilled steaks. It works anywhere.

Place the potato in a small pot. Cover with water and boil until tender. Remove potato from the water and mash it. Add the heavy cream, Creole seasoning, green onions and parsley, and mix until it reaches a creamy consistency. In a medium bowl, combine the crab meat and crackers. Carefully blend this in the potato mixture. Do not over-mix because the crab meat will break up. Form the mixture into four equal-sized balls. Refrigerate until ready to use.

Preheat oven to broil. Wash fish and set aside. Spray a baking pan with no-stick cooking spray. Liberally season both sides of the fish with Creole seasoning and pat it into the flesh by hand. Stuff the belly cavity of each fish with the crab-meat stuffing and place the stuffed fish belly down on the baking pan. Put pan in oven and cook 10 to 12 minutes, until fish is done. While the fish is cooking, make the lemon-butter cream sauce by simmering the cream in a small skillet with the lemon juice, butter and salt. Simmer until volume is reduced to half of starting amount. Mix the corn starch with ¼ cup water. Slowly stir it into the sauce to thicken. You might not need all the corn starch, so add a little at a time. Spoon the lemon-butter cream sauce over the fish before serving. Serves 4.