It didn’t take us long to learn that Vermilion Bay Trout Masters can cook as well as fish. Over a period of years, the two of us have cooked repeatedly with Steve and Pookie Smith and David “T-Coon” Billeaud, and we have enjoyed every bite.

This episode wasn’t any different, except that I lured the two masters — David (featured in the book Trout Masters: How Louisiana’s Best Anglers Catch The Lunkers) and Steve (featured in Trout Masters Too: How The Pros Do It) — to both cook and fish on the same day.

The scene of the cooking caper was Smith’s Cypremort Point camp, which is equipped with a near-professional kitchen.

This promised to be fun. Both 56-year-old men are self-admittedly absorbed with healthy eating, and both love good food.

Smith, our host, is a charter captain specializing in speckled trout and redfish, although he has been bitten by the Elite Redfish Series Tournament Trail bug.

His tournament fishing the last two years has been hampered by treatment for a serious health challenge in 2014, and bad luck and work commitments dogged him in 2015.

His illness is the reason Smith is “a health nut,” as he calls himself. He has a low-carb, gluten-free diet and brags that he hasn’t had a soda or beer in 2½ years.

But the life-long competitor (before fishing it was triathlons and sprint car racing) hasn’t given up on tournament fishing.

“2015 was humbling to me, but it has ignited a competitive spirit in me to win,” Smith said. “But I am absolutely not a competitive cook. I cook because I enjoy eating. I don’t even watch competitive cooking on TV. My wife Patricia — ‘Pookie’ and I cook together. A good Saturday is to have 10 or 12 couples over, cook for them and watch an LSU game.”

For Billeaud, cooking isn’t a hobby: It’s his profession. He is the sole owner of T-Coon’s Restaurant in Lafayette.

The 22-year-old eatery is famous for its hearty, cafeteria-style lunches. Shrimp, crawfish and fish courtbouillon, étoufée and meatballs are on the lunch menu every day, and a host of specials — smothered rabbit, short rib fricassee, stuffed pork chops, smothered chicken and okra, smothered turkey wings, and shrimp and okra stew — are offered daily.

His ¼-pound, pure pork sausage patties are homemade, and he is proud that his restaurant seasons the eggs they serve.

“No one else seasons eggs, no one,” Billeaud rumbled.

On Sundays, the wait for one of the restaurant’s 100 tables can be as long as an hour.\

Billeaud adopted his father’s nick-name — “T-Coon” — for the restaurant, but it has become his moniker, as well, since his identification as a trophy trout fisherman.

The bold chef claims to have developed most of his cooking through experimentation, after learning the basics from the family maid, and his mother and father.

He hates to be defined, and calls his cooking “zydeco cooking,” although it’s definitely in the Cajun genre.

“But I don’t want to be lumped with those who cook things hot and call it Cajun,” Billeaud said.

To call him nutrition-conscious is a strong understatement. His diet includes a lot of wild game and locally raised, grass-fed beef — “wild beef,” he calls it.

“You need to understand every bite that you put in your mouth,” Billeaud stressed.

He goes past the organic food label and is concerned to get more Omega-3 fatty acids than Omega-6s.

“The fish cooked in the restaurant and what I am cooking here are wild blue catfish,” Billeaud said. “Pond-raised fish have flavor issues and are Omega-6 rich. Wild fish have no hormones or antibiotics added to their diets.

“All the blue cats I use are local to Acadiana, and can be up to 50 pounds.”

Billeuad meticulously trims each piece of fish at his restaurant. All red meat and connective tissue is removed and discarded, leaving only snow white meat for cooking.

Steve and Pookie Smith’s crab salad is wonderful and light. Of course, anything with jumbo lump crabmeat has to be good.

The recipe came from the two of them trying to duplicate a Ruth’s Chris Steak House salad called Crab Tina.

The offering is no longer on the steakhouse menu, but that no longer matters to the couple: They have their own version.

The roots of this recipe go back to something David Billeaud “dreamed up” in his days before he went carb-free.

Going that route meant that he no longer was able to use flour to thicken up the sauce. He said he tried reducing the cream, but that it was still too loose.

He then tried adding cheeses. That did the trick.

We left it in its original form, the way Billeaud cooked it, but this recipe feeds a crowd, so you might want to cut it down.

Billeaud uses his own The Stuff Zydeco Seasoning for cooking. If it is impossible to find where you are, use your favorite Creole seasoning. 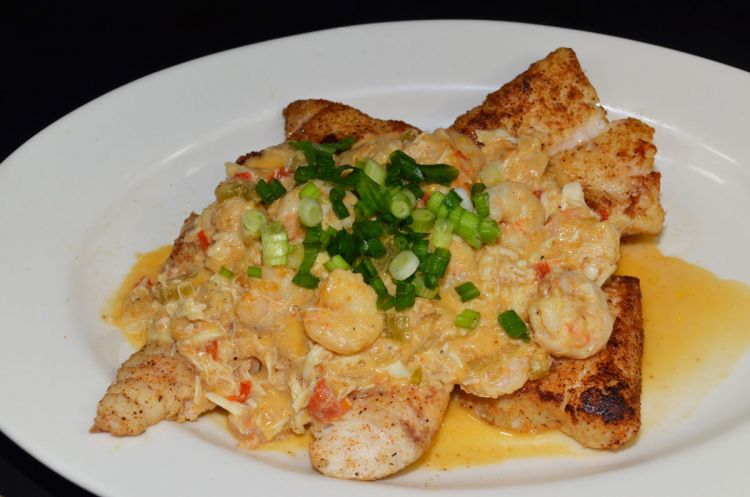 Simmer the cream in a saucepan over moderate heat, stirring to prevent burning, until it is reduced to 1/4 its original volume. While it is simmering, melt 1 stick of butter in another pan over low heat. Add the bell pepper, celery, onions, and garlic, and cook over medium-low heat. When the seasonings are soft, strain the shrimp stock into them and simmer for 20 minutes. Stir in the reduced cream and simmer 5 more minutes. Stir in the shrimp and heat until cooked, approximately 5 minutes.

Melt 1/4 stick of butter in a frying pan over medium-high heat. While the butter is melting, season the fish fillets to taste with Zydeco Seasoning. Add the fish and cook until done, turning once when the lower surface is browned. Cook the fish in batches, using more butter as necessary. 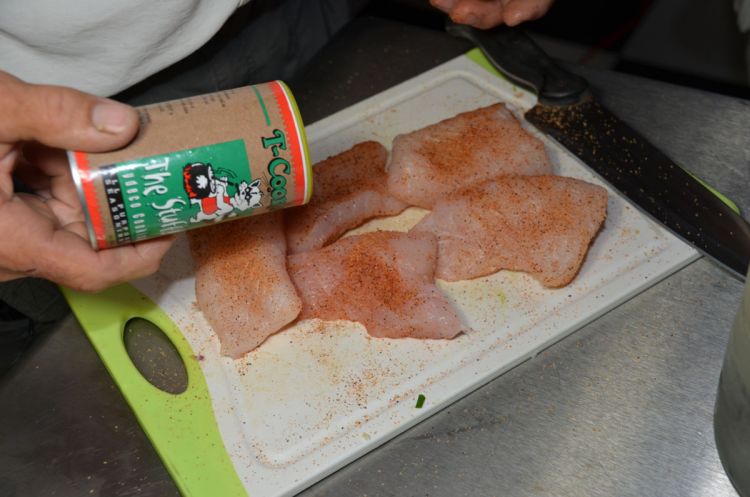 While fish is frying, add the Parmesan and cheddar cheeses and stir in to melt. Gently fold in the crabmeat. Spread the fried fish on a platter and spoon the sauce over the fish fillets. Sprinkle with green onions before serving. Serves 10.

Grilled, baked, fried and even smoked, red snapper holds its own with a wide variety of cooking techniques. […]

The Louisiana Department of Wildlife and Fisheries is offering more explanation regarding the new license requirement for roadside crabbing. […]