Few Louisianans know the location of Johnson Bayou, a remote Cameron Parish marsh community. Badly treated by one hurricane after another, the once-thriving small town located on the cheniere of Blue Buck Ridge, is now comprised mostly of fishing and hunting camps.

Only 27 miles from the Texas Border and a lot closer to Port Arthur, Texas, than to Lake Charles, Louisiana, it’s not surprising that local culture carries a strong Texas influence.

Robbie is a perfect example: The name Trahan is pure Cajun (as is much of his cooking), but he drawls with a pronounced East Texas nasal twang that is distinctly not Cajun.

“We are kind of all mixed up over here,” he explained.

The lean, highly animated man grew up in Johnson Bayou, but as a result of the repeated hurricanes he has retreated to Sulphur. He still maintains a camp on family land in Johnson Bayou that serves as a base for his guiding service.

He and his wife Tonya, a Cameron Parish native, cook at home, but at the camp Robbie is the king cook.

He claims to have learned how to cook by watching his mom Vickie in her kitchen and his dad Randy cook at hunting camps. He also kept an eye on the cooking at the Point Pleasant Hunting and Fishing Club, where he once worked as a guide.

“If you live down here, you learn a little from everyone,” Trahan explained. “Friends and family like to get together to cook, especially wild game and seafood. Both are so easily available here.

“My mom is an awesome cook. She cooks everything, but I really like her garfish patties and garfish courtbouillon.

Garfish is a big deal here; we actually have a garfish rodeo. Whoever catches the three biggest gar wins.” 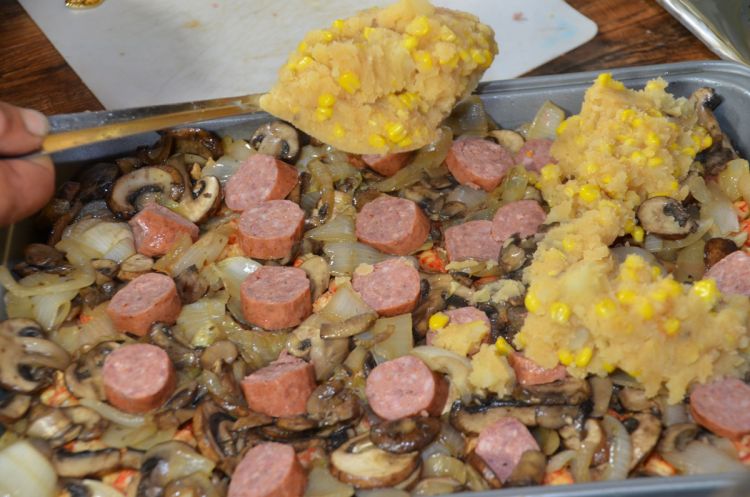 This dish is a perfect example of how Robbie Trahan fuses the cuisines of Texas and South Louisiana. Shepard’s Pie is definitely not Cajun, but the infusion of crawfish is.

“I got the idea for this when I made a shepherd’s pie with beef,” Robbie said. “I got to thinking: How can I use seafood? Then I ate a boiled crawfish po-boy: boiled crawfish, potatoes and corn — pretty much the same thing.

“This is the first time I tried this.”

He sounded both hopeful and cautionary. He shouldn’t have worried; it was good, and it was original.

A note: The ingredient list doesn’t provide for any salt and pepper, as the seafood pour-and-boil mix should provide enough. More may be added, but with care.

Add the potatoes to a large pot of water over high heat. When the water comes to a boil, add the seafood boil and the corn. Drain the water when the potatoes are tender to a fork. Sauté the onions and mushrooms in 3 tbsp. butter until tender, about 15 minutes. Add the remaining butter to the potatoes and corn, and mash them. Oil a 14-inch baking pan with the olive oil. Assemble the dish by layering half of the sausage in the pan, followed by a layer of half of the potatoes, then a layer of half of the onions, and a layer of all of the crawfish. Top with layers of the remaining sausage, potatoes, and onions. Sprinkle mozzarella cheese over top of dish and bake at 350 degrees for 45 minutes. Serves 8.

“This is something we cook on the fly when we come in from fishing,” Trahan explained. “Redfish is a favorite, but we use any fish. An old-time friend of ours from duck guiding days, Greg ‘Paw Paw’ Williams, came by the camp once after I cooked it.

“I said, ‘Try my fish tacos.’ He said, ‘What? I don’t fish with cacahoes.’ Then he called them cocahoe tacos, not fish tacos. Since then, my uncle Mike Boudreaux uses that nickname for them. He loves them, and every time he comes to the camp, he requests them.”

This recipe is all about the taste, Trahan said.

“Because the fish fillets break up, it isn’t a pretty dish, but it is very flavorful,” he said. 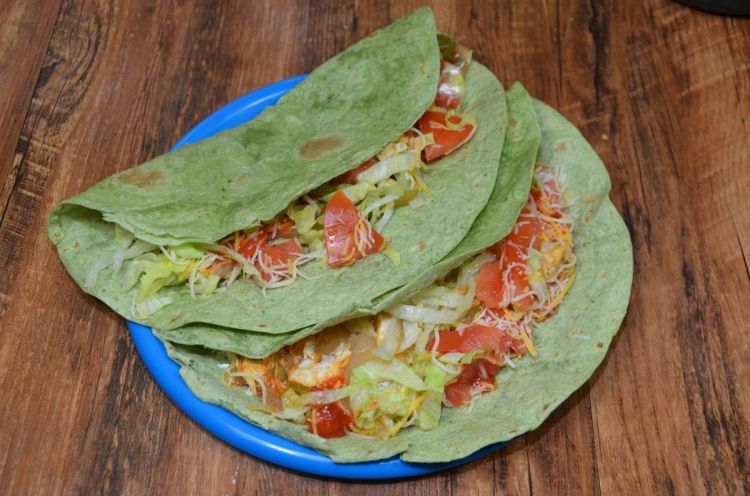 Place fish, lemon juice and 1 package of taco seasoning in a bowl, and mix well to coat the fillets. Set aside. Put beans, 1 cup shredded cheese, 1/3 cup taco sauce and 1/4 cup water in a small saucepan and stir to mix well. Heat over low heat while the other ingredients are being prepared. Melt the butter in a large frying pan. Add half the onions, half the bell pepper and the vegetable oil, and cook over high heat for 10 minutes, stirring often. Push the onions and peppers to the edges of the pan, and add the fillets to the center of the pan, moving the onions and peppers as necessary to accommodate them. Top the fish with the remaining onions and peppers, and cook uncovered over high heat for 10 minutes. Flip the fish, onions, and bell peppers over. The fish fillets will break apart, but that is OK. Cook 3 minutes, and then sprinkle the remaining package of taco seasoning over the fish and stir in. Cook 5 more minutes. Heat the tortillas for 30 seconds in a microwave oven to soften them. Make the tacos by spreading a dollop of sour cream across the center of an open tortilla, followed by a spoon of beans, the fish flakes, lettuce, tomato cheese and more taco sauce to taste. Fold each tortilla over to serve. Serves 6.