Pat Attaway modestly calls himself “a manager for a major helicopter company,” but in truth he is an executive in a highly challenging job.

So what does he do to unwind? He fishes some, and duck hunts in season. But most of all he cooks.

The Lafayette resident left his Cajun roots behind when he became a naval officer and pilot in 1982. Stationed in Virginia for a lengthy period of time, he not only got away from Cajun cooking but cooking in general.

After returning to Louisiana, he resumed an old passion — duck hunting —  and bought a houseboat as a base of operations. In 1996, he took on a partner named John Dupuis, who was a traditional Cajun cook.

“When I saw him cooking and bringing back those flavors I grew up with, it brought back memories and emotions,” Attaway said with a grin. “I began cooking more and more. Now, cooking is what I do on weekends. At the duck camp, I spend more time cooking than hunting.”

He is the product of a “fusion marriage” between a Cajun mother — Margaret Landry of Lafayette — and George “Red” Attaway, his Texan father. He grew up near Abbeville because his mother had the choice of living either there or in Texas, and she was determined not to live in Texas.

“The people in Vermilion Parish in the 1960s were not traditional Cajun Prairie Cajuns,” he said. “We ate seafood and rice. I didn’t know what boudin or tasso was. Everything in rural Vermilion was rice fields. We ate a lot of rice — rice at every meal.

“People buy their seafood now. Things like crab stew and garfish cooking are no longer common. In the ’60s, everybody knew how to cook garfish. No one in this neighborhood (he waved his hand in a circle around the suburban Lafayette subdivision surrounding his kitchen) would know how to clean a garfish.

“Cajun cooking was the art of taking a little bit of seafood or meat and stretching it to feed a lot of people; it was a subsistence cuisine. Mother could feed six people in our family with a small piece of round steak by making a brown gravy to serve with rice.” 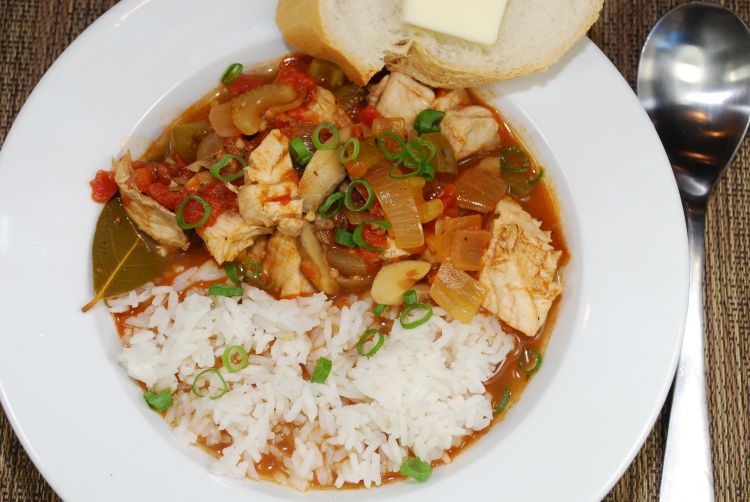 Pat Attaway’s mother hand-wrote this recipe for him before she died in 1993. The fish needed for this recipe was the reason for the excursion featured elsewhere in this issue as “Wet Leg Reds.”

Attaway is very proud of the recipe.

“Growing up, we ate courtbouillon once a year in the late summer or early fall,” he explained. “That’s the only time of the year I cook it. That’s when redfish are most available over here. Other places, redfish are available year round.

“Mother always used redfish for courtbouillon. Gaspergou weren’t available in Vermilion Parish. We didn’t use catfish, either. We caught them all summer, but always fried them. In the winter, we caught sac-a-lait.

“My dad would take us redfishing off the bank in the Intracoastal Waterway. In those days, they were rat reds — 12 inches long.”

Attaway offered a couple of tips for this recipe. The most critical step is the cook time after the tomatoes are added: If the courtbouillon isn’t cooked long enough, the resulting dish will be acidic and biting.

Also, the spiciness of the dish may be modified by using mild Rotel tomatoes for less spice and extra hot Rotels for more spice. 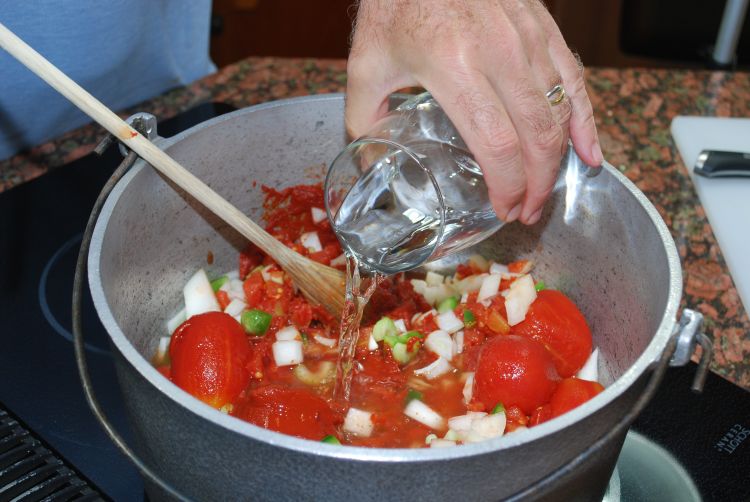 Warm the roux over medium heat in a large pot. Add bell pepper, onions, celery, Rotel Tomatoes, canned tomatoes and tomato paste. Add 2 cups of water, bring to a boil and reduce to low heat. Cook 3 hours uncovered, stirring every 15 minutes, until the mixture is thick and “pulpy.” If it gets too thick, add small amounts of water, but cook for the full 3 hours. The vegetable pieces should become soft, but still be intact. Add 6 cups of water, bay leaves, garlic, thyme, allspice, salt and pepper, and increase heat to medium. Stir to mix, and then add lemon juice and mushrooms. Simmer for 45 minutes, and then adjust salt and pepper. Cut fish fillets into 1-inch cubes and stir into the courtbouillon. Cook 10 minutes at medium heat. Do not overcook and do not stir too much or the fish will break into small pieces. The fish cubes should remain intact. Serve over rice. Serves 10.

“This dish was invented two months ago at our kitchen table,” Pat Attaway. “We had kept some small shrimp from a shrimping trip because I like small shrimp better than large shrimp for sauces.

“A lot of small shrimp have more surface area than a few large shrimp, so you get a more intense shrimp flavor in a dish.”

Attaway catches his own shrimp not just because he enjoys shrimping but also because he fanatically believes Vermilion Bay shrimp taste better than others.

Unlike other people who shrimp for their own use, he always keeps the small shrimp he catches.

He explained the birth of the recipe.

“I had small shrimp. I had avocados. I had some of our favorite homemade salad dressing,” Attaway said. “So I sautéed the shrimp in the oil-based dressing and mixed it with guacamole. We ate it on chips and we loved it.

“The worst thing that you can do with this recipe is to overcook the shrimp. Do not cook too hot or too long. The shrimp gets rubbery and the garlic burns.”

This recipe will make more dressing than needed for the recipe. Use the rest for dressing salads. The dressing is best if made in advance and refrigerated overnight.

Whip together the olive oil, lemon juice, basil, thyme, salt, and garlic to make a dressing, and set aside. Cut the avocados in halves, remove the seed from each and scoop the flesh into a mixing bowl. Add 4 tbsp. of dressing to the avocado flesh, mash and mix. Add more dressing as needed to get texture smooth. Add 1/2 cup of dressing to a small frying pan over medium heat. When dressing is hot, spread the shrimp in the pan. Stir periodically while cooking. Cook until the shrimp are firm and pink, approximately 5 minutes. Pour the shrimp and cooking juice into a bowl, and place it in a refrigerator to chill. When cool, mix the shrimp and avocado mixture. Serve with tortilla chips. Serves 6.