Lane LeMaire is a dedicated Cajun cook and a skilled outdoorsman. So it is no wonder so much of what he cooks is fish, seafood and game.

The 43-year-old Lafayette resident was born in Gueydan, where his mother is from. When he was 5 years old, his father moved the family to Lafayette to open a pharmacy.

LeMaire has been there ever since. He didn’t even leave Lafayette to go to college.

His parents played a big role in his life. When he was a kid, his father was a guide for Amoco Hunting Club (now White Lake Preserve), and little Lane accompanied him in the field. LeMaire developed a love for hunting ducks and geese, although he will hunt deer sometimes now.

“We had family land that we hunted in Gueydan,” he said. “Back in the day, you hunted family land. Now it is all leased. Now 250 acres of rice land can cost $16,000 a year to lease. So the family land hunting is no more; that was old school.”

He fished a lot in those days, too, primarily for bass, sac-a-lait, bream and redfish. As he grew older, he branched out.

“I started fishing offshore with Richard Legnon, a charter captain out of Cypremort Point,” LeMaire said. “His boat was 60-something feet long. It was slow.”

But the speckled trout bug was right around the corner for him.

“My dad and I started talking about trout, so we took a charter trip to Big Lake,” LeMaire explained. “Four of us caught a 120-quart ice chest full.

“Then I started fishing Cocodrie. Three of us — Nicky Duplechein, Kyle Braniff and me — entered a tournament. Another friend, Todd Rogeau, told us to go across Whisky Pass and fish a rig in Lake Pelto with live croakers and stay there so that when the fish started biting we would be there.

“We ran out of croakers, found a shrimp boat and bought some more croakers and went back to finish fishing. We won all the trout categories: $4,000. We almost sunk the boat three times crossing the pass in a 17½-foot Hydrosport.”

From that point on he was hooked on speckled trout, a fish he loves to cook as well as catch. Nowadays he fishes Big Lake every Sunday with his dad. Other than Sundays, he is a member of Shane Zeringue’s Team Boneafide Smasher Speckled Trout Fishing Team.

“She wanted me to learn,” LeMaire said. “Now I’m bringing my twin kids, Luke and Demi, to her house to learn how to cook.”

Maggie is a traditional Cajun cook, although she ventures into other cooking styles, as well.

“I love to experiment,” he said with a huge, beaming smile. “I’m doing stuff with Asian sauces, non-traditional vegetables for Cajun cooking like asparagus, cheeses and seasonings — less-traditional stuff like rice and gravy. I like to try new things that people would say, ‘I don’t know.’”

A passion for food

It’s no exaggeration to call LeMaire a man of passion.

“I love to eat. I like to see people’s expressions when they say, ‘Man, this is good,’” he said. “I remember eating a freshly killed deer at the camp when I was younger. It was so fresh — so good — it stuck with me.

“I have been cooking since I was 15. I learned through camp life. All my friends’ dads had access to good foods. I paid attention. Someone was always cooking. When I was a teenager, the men would cook, and I would chop seasonings and wash dishes.

He cooks at home and is the ultimate camp cook — one who likes to look in the camp’s kitchen cabinets and make a savory meal of what is on hand.

His motto is, “Don’t be scared to try new things.”

Both of his recipes here call for prepping by marinating shrimp in seasoning overnight. In a pinch, they can be seasoned immediately before cooking, but overnight marinating produces the best results.

LeMaire calls this creamy, rib-sticking dish quick and easy to cook after an all-day fishing trip. He copies as well as innovates: He credits this dish to his sister, Angie Hardy, who cooked it for his mom’s birthday.

“She got it from a friend, written by hand on tablet paper,” LeMaire said.

For those unfamiliar with Guidry’s Fresh Cuts, they are precut traditional Cajun fresh seasonings sold in plastic containers in the fresh produce section of most groceries. In recent years, they have become very popular with cooks in the heart of Acadiana, where people really know what good Cajun food is. 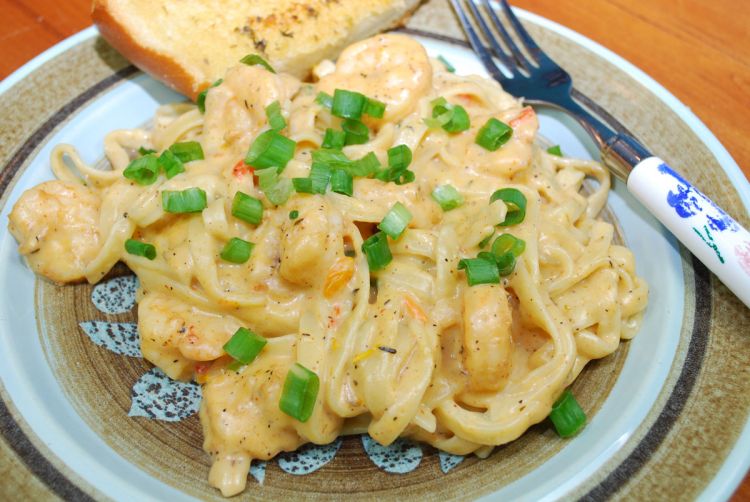 Season shrimp with Season-All and garlic powder to taste and marinate in the refrigerator overnight. Melt the butter in a large pot and stir in the Guidry’s Fresh Cuts. Stir in the diced bell peppers. Cook over medium heat, stirring often until the seasonings are tender. Stir in the mushrooms. Add the shrimp and stir to mix. Cover and cook until the shrimp are no longer translucent. Add the Alfredo sauce. Rinse the sauce jars into the mixture with the half & half. Add the blackened redfish seasoning, the Parmesan cheese and the green onion tops. Stir well to mix. Reduce heat to medium-low and cook for 10 minutes or until mixture is hot. Turn heat off and stir in fettuccini. Serves 10 to 12.

The idea for this sauce came to LeMaire from Joey’s, a Lafayette caterer and specialty meat store. “They have a salad called Spinach Cane Pepper Jelly Salad,” LeMaire said. “It’s made with shrimp, chicken or beef tips.”

The Cane Jelly Vinaigrette Lane uses in this recipe may be purchased bottled from Joey’s online or in person at 503 Bertrand Drive in Lafayette.

Season the shrimp with the Season-All and garlic powder, and marinate overnight in the refrigerator. Sliver the bell peppers. Slice the onion into rings and cut the rings in half. Add the olive oil, bell peppers and onions to a medium frying pan, and sauté until the peppers and onions are translucent. Stir in 2 tbsp. cane pepper jelly vinaigrette and mix well. 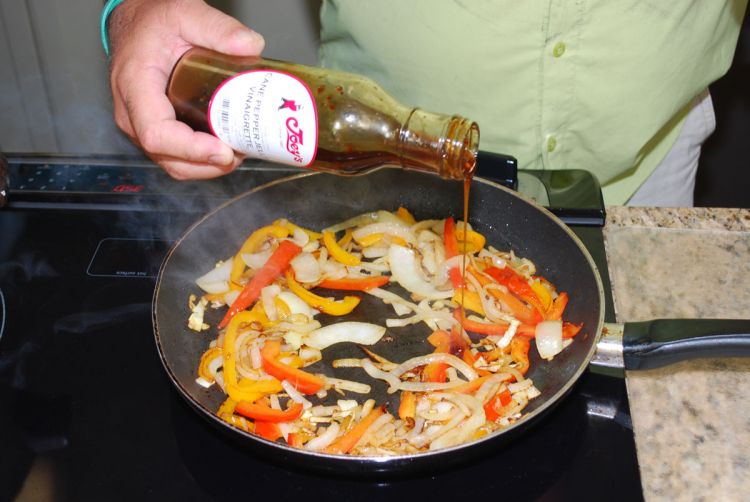 Push the seasoned peppers and onions to the edges of the pan, and spread the shrimp evenly in the center of the pan. Cook 5 minutes, turn shrimp over and cook 2 more minutes. Add 1/2  cup cane pepper jelly vinaigrette and mix well. Cook over low heat 2 more minutes. Serves 6 to 8 as an appetizer.