Grand Isle is a unique place. It’s different not just because it is the only inhabited barrier island in Louisiana but because of its people.

Its people are divided into two groups: residents and camp owner/fishermen/tourists.

It’s not Cajun, even though the only way in by road is through the soul of Cajun Country. Nor is it New Orleans, redneck or even — heaven forbid — Yankee.

Residents are further divided into those born there and those transplanted there. Born residents are proud of their background on this hurricane-swept strip of sand with an anchor “suburb” on the mainland called Cheniere.

“I grew up next door,” he said, motioning toward his mother Cindy’s home.

Like the people of the island itself, the residents of Cheniere do two things: They fish and they cook, and they cook and they fish.

Like his father Eldridge before him, Paul is a commercial shrimper. The elder Frazier shrimped and trapped fur animals, as well as trammel netted and seined for redfish before the gill net ban swept those nets away.

Instead of netting fish in the wintertime when shrimping is slow, Paul fishes oysters from his modest oyster lease. Rather than sell his oysters to shucking houses, he sells them on order — directly to the public.

When Paul isn’t fishing, he is cooking.

“I cook a lot,” he admitted. “I am in the Rotary Club of Grand Isle, and am pretty much the club cook.”

A family of cooks

Paul has seven brothers and sisters and, according to him, “all of them cook.

“David cooks, probably better than I do,” he said. “He can cook anything and make it good. I leave the wild game up to him. He is No. 1 at that.

“Mark is more like a smoker or barbecuer — smoked meats and oysters. Mike, he’s the boiler — shrimp, crabs, whatever. Jamie, he fries. Cathy (Womack) is a retired chef. She ran the Morning Café at Boomtown Casino in Harvey.

“Darlene (Taylor) is the baker: pies, fresh bread, chocolate tarts. She makes a tarte a la bouille just for me. Linda (Goldman) has a U.S. Customs job that keeps her busy, but she can cook almost anything. She owned My Mom’s Restaurant in the middle of the island in the mid-1980s.

“We will meet at one of our houses and cook. We’re loud!”

Learning from mom and dad

Both Paul and David, who wandered in to join the conversation, agreed that their mother is a good cook. Paul said his father, who died four years ago, was a “one-dish cook,” but he said his mother always cooked meals with courses.

“Those people in New Jersey — they don’t know how to cook,” he added mischievously. “They boil stuff. Last year when I went up there, I cooked for five days: red beans and rice, gumbo, crab patties, jambalaya. They loved it!”

“Mom cooks Yankee food,” David chimed in. “Everything’s good; look at me, (with a rub of his ample tummy). I complain … about some things, but most of it’s good.”

“He’s a chronic complainer,” Paul observed with a huge laugh.

“She’s not quite as good as Dad,” David said in his own defense, “but you gotta remember: He cooked like a Coonass. He was 100 percent Coonass.”

“Yeah,” Paul added, “he browned and smothered everything to death. Dad cooked simple. When he made white beans and rice, he used one onion. That’s it.

“He was the most-impatient thing. But he was patient in cooking. He liked to eat on time. During the winter, he had two clocks: one was an eating clock (and) the other had the new (daylight savings) time.”

“Mom still has … two clocks: One clock is always right, no matter what time of year.”

The seafood and cooking culture runs deep in this family.

“While we eat lunch, we are talking about what we will eat for supper,” Paul said. “We live to eat in South Louisiana.”

“In Grand Isle, we have everything fresh: shrimp, crabs, oysters and fish,” he said. ‘I have a neighbor who cooks smothered shrimp and pumpkins; She prefers green ones.”

Paul summed up what seemed to be both men’s opinions.

“If a man goes hungry here, he is just too lazy to go find something to eat,” he said.

“I saw this dish on TV,” Paul Frazier admitted. “They do it in South Carolina and other places in the South. It never caught on here, even though more shrimp come out of the water from here than anywhere.

“The one I saw on TV didn’t cook shrimp like I like; they didn’t smother down the onions to make a gravy.”

He admitted to watching a lot of TV.

“I watch the Food Network and the Travel Channel,” he said. “I really like Guy Fieri; he makes you go to the places he goes.” 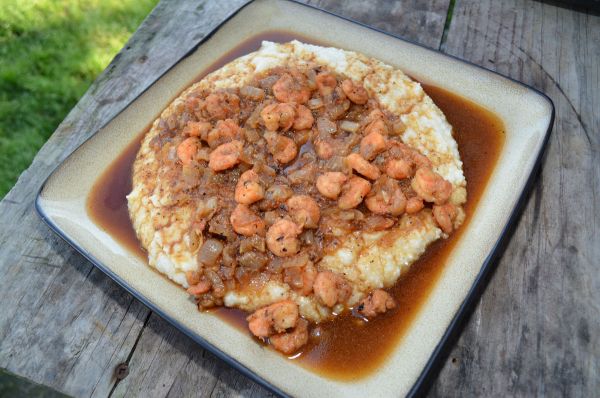 Paul cooks his Shrimp and Grits three or four times a month, calling it one of his two favorite breakfasts, along with biscuits and gravy.

Cook grits according to package directions. When done, add cheese and stir well to blend. Set aside. Add enough olive oil to cover the bottom of a skillet. Add onions and garlic and sauté until medium brown. Stir in half of the shrimp, and cook until firm and pink. Add remaining shrimp and cook until shrimp are done. Add salt and pepper to taste. Add water to make gravy. When the gravy starts to caramelize on the bottom of the pan, remove from heat and serve over the cooked grits. Serves 4.

Paul Frazier said the idea for this dish came from Coty Folse, who tasted it at an event and came back and told him how good it was.

“I had nothing to go by, so I made a jambalaya with pasta instead of rice,” Frazier said. “Every year at Rotary, we make a pot of jambalaya. We decided to make two pots: one jambalaya and one pastalaya. They ate all the pastalaya, and everybody started asking for it. 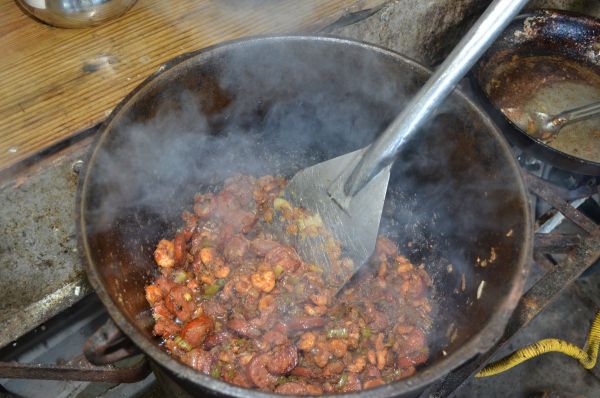 Paul prefers to use angel hair spaghetti, feeling it flavors better because thicker pasta only absorbs the flavor on the outside.

Boil the angel hair pasta until al dente and set aside. In a large pot (preferably cast iron), sauté the onions in the oil until tender. Add celery and garlic and sauté until lightly browned. Stir in the sausage and cook until browned. Add the shrimp and cook until the liquid cooks out of the shrimp and mixes with the onions and makes a gravy. Sprinkle in salt and pepper. Pour in water and bring to a boil. Cook over high heat for 20 minutes. Add cooked pasta and mix well to coat. Allow the pastalaya to rest for 15 minutes before serving. Serves 8.

This Cajun Fish Chowder recipe is one that once you make it, it becomes a regular part of your kitchen menu rotation. […]