Collette Weaver and Ron Harris are in-laws. They married siblings, but share interests in fishing and food, and are better described as friends than relatives. Both are mischievous and talkative.

Both live in Slidell, Ron in Lake Village and Collette in Eden Isles.

Ron joked about how he arrived from his native St. Petersburg, Florida. “I was on a motorcycle, and I ran out of money in New Orleans. I got a job running a crew boat, and I lived in the French Quarter. It was great! But the boat was tied to a rig that exploded. I decided that I better quit doing this, so I started selling cars for Lambert Datsun.”

He parlayed that into a used car lot he owned for 20 years.

“My ex-wife still has it,” he laughed. “I had maroon pants and plaid pants, and the white shoes to go with them.”

The bespectacled, gregarious man is a born salesman.

He headed to Slidell to take over a Nissan dealership with partners. Three years later, he opened Allied Mortgage, which he operated until Hurricane Katrina.

“I closed the business,” he said, “and have been fishing ever since.”

He fishes four days a week, on average, almost exclusively for Lake Pontchartrain speckled trout. His biggest is a 9 ½-pounder.

Collette is a native New Orleanian and an authentic New Orleans-style Creole cook, except that she cooks almost everything in a microwave oven, which is a story unto itself.

Collette’s mother Jeanne Landry, who Collette calls a major influence on her cooking, taught microwave cooking for 25 years, first for Thermador and later for Litton. She began doing in-store demonstrations in the early 1970s.

In those days, microwave ovens were first becoming available for residential use. Before that they were mainly used commercially.

“People were amazed that we could cook a whole meal in the microwave,” Collette explained. “My momma originated cooking roux in a microwave.

In 1977, Jeanne wrote a now-out-of-print and rare cookbook, Saute! A Collection of Creole Recipes for the Microwave Oven. The recipes were rooted in her mother’s Higginbothim family and husband Pratt Landry’s family.

“For five or six or seven nights in a row,” Collette said, “we would eat the same recipe in variations to get down the recipe conversion from traditional to microwave cooking.

“Now I do 90 percent of my cooking in a microwave. We entertain a lot. I have cooked for as many as 211 people from the three Corvette clubs we belong to. Food cooked in a microwave retains nutrients and flavors that would leach out in boiling.

“Microwave cooking doesn’t heat the kitchen; it cuts down on cooking time; it’s easier to clean up. I will do some cooking on a stove top, but most of it is done in a microwave.”

Four to six couples who are neighbors of the Weavers on their canal (all the homes are waterfront property in Eden Isles) get together three times or so a week to cook.

Collette has three brothers and a sister, and they all love food.

The late Pratt Landry III worked for Popeye’s and developed their buttermilk biscuits, and red beans and rice. He also worked with Warren Leruth to develop Chelsea’s Frozen Custard.

He owned the Jukebox Cajun Diner on Williams Boulevard in partnership with the late Al Copeland of Popeye’s.

Dave Landry is a cinematographer with his wife Terri, and did the Great Chef’s series on PBS television, as well as the John Besh Justin Wilson series. Now he is doing a great barbecue series and the Bar Rescue series.

Tim Landry, who owns a sound system business, doesn’t cook as much as his brothers, but loves to eat.

Sister Amy Boudet is an avid family cook and cooks with a style similar to Collete’s.

This dish is Ron’s. He came up with the idea while he was eating a Caesar salad and said to himself, “This would taste great with shrimp in it.”

He calls the dish a cross between an Italian salad and a Greek salad.

Ron prepares the salad four or five times a summer for family and friends. Sometimes he makes a large salad and serves it as an entrée. Other times it is a side salad. 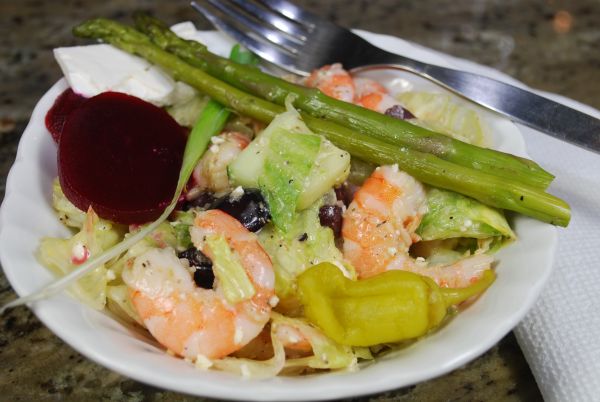 Boil the shrimp in plain water, then peel and devein them and set aside. Cut the lettuce into bite-size pieces, discarding the core. Place the lettuce in a large salad bowl. Add salt and pepper to taste and toss. Chop the green olives and add to the salad along with the sliced Kalamata olives and the cucumber (if desired). Crush the oregano between your hands to release the flavor as it is added to the bowl. Add the vinegar, then the shrimp and Feta cheese and toss. Remove anchovies from can, cut them in half, and put them into a food processor and pulse to puree. Add the garlic and 1/8 tsp. of salt to the processor and pulse until the garlic is minced. Add the egg yolks, olive oil and lemon juice and mix well. Pour the dressing over the salad and toss. The salad may be garnished with pickled beets, cooked asparagus spears, a sliver of green onion, or a pepperoncini pepper. Serves 4 as a side salad.

Trout Meunière was a dish cooked often by Collette’s father, but the indulgent amount of crabmeat is her touch. Collette loves to cook elegant dishes; this is one.

The crab meat stuffing is versatile. It can be used to stuff crabs or formed into crab cakes that can either be broiled or fried.

While cooking the stuffing, don’t be afraid to stop the microwave to check the food while it’s cooking. Stopping and restarting the microwave does not affect the cooking process.

Melt butter in a 2-quart casserole dish. Add onion, celery and bell pepper, and sauté in the microwave on high until tender, about 5 minutes. Stir in green onions and parsley, and return to the microwave for 3 minutes.

Moisten the bread with water and squeeze out the excess. Chop the bread in a food processor and add to the casserole, along with the salt and pepper. Carefully fold in the crab meat. Cover and cook on high for 5 minutes. Set aside to serve as a topping on the fish.

Melt the 2 tablespoons butter in a large pan. Dredge the fillets in flour, and season with salt and pepper. Fry the fish fillets on the stove top until golden brown. Add more butter as needed. Remove the fillets from the pan. Add 4 tablespoons butter and 1/4 cup parsley and sauté until the parsley is tender. Spoon the parsley butter over the fish fillets and top with a generous amount of the crab meat stuffing. Serves 4.