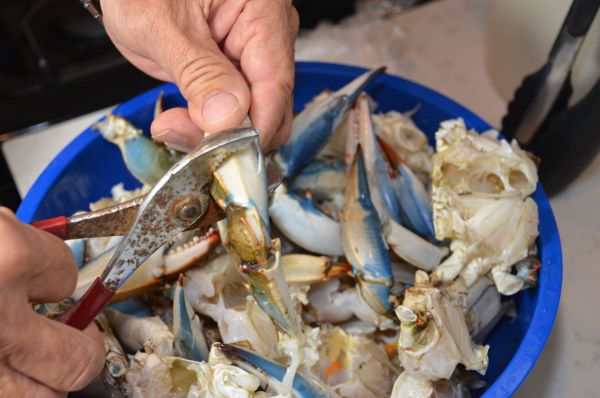 Bayou Lafourche runs the entire north-to-south length of Lafourche Parish. If you are from Lafourche, you are either from up-the-bayou or down-the-bayou.

Raceland and areas north are clearly up-the-bayou. Galliano, and areas south are very much down-the-bayou.

Lockport, where Ronnie Sampey is originally from, is in the middle.

I had to push him pretty hard about which category he fell into, but finally he answered.

“I guess I am kind of up-the-bayou,” he admitted.

This bayou is known for good cooks, and Ronnie is one of them.

At 72, Ronnie has enough life experiences growing up on the bayou to almost personify what it is to be a Cajun. He was born by midwife on his family’s 440-acre sugarcane and cattle farm.

“My dad, when he was raising us, was a commercial duck hunter and fur trapper,” he recalled. “Mother cleaned the ducks and packed them in big crock jars with salt for Dad to deliver to hotels in the French Quarter.

“Dad, who was totally illiterate, would go fur trapping in the morning. Then he would go drive a school bus while my mother skinned the animals and scraped the fat from the skins. When he got back, he put the furs on molds. He did all this while he farmed every day.

“I grew up with no refrigerator. Everything was fresh or preserved. We had a big garden all year long, and my mother put vegetables up in Ball jars. Rabbits, ducks, and doves were in salt. Pork was in lard in crocks. I can remember coming home from school and cutting a link of fresh sausage from a crock and heating it in a frying pan while changing clothes.

“Mom would bake a big, round bread called ‘cap bread’ in a mud oven outside. I would make a sandwich with the bread and sausage to take with me into the field. Only when it was too dark to work outside did I get a chance to do my homework from school.

Ronnie farmed with his father Raleigh until he was 25 years old.

“In those days, it was like an obligation,” he said. “While I was farming with Dad, I became a shipyard machinist. It wasn’t easy — farming with Dad and working full time.

“I feel like I was born with a shovel in my hand,” he said with grim humor. “Now, I don’t even feel like doing flower beds.”

Ronnie Sampey said this dish came from “old man Percy Broussard,” whom he got to know in Destrehan 14 years ago.

“He lived by himself but traveled regularly to Grand Isle to fish,” Ronnie said. “One day he told me, ‘I’m going to show you how to cook crabs like you’ve never seen before. I need 10 pounds of onions.’

“I didn’t think that anyone could cook one dish with 10 pounds of onions. We cooked it at my camp on Grape Lane on Grand Isle. After he put the dish on the stove, we sat on the swing and drank beer for four hours.

“By that time, it didn’t matter how it came out. No, seriously, it came out great. I cook it every once in a time whenever I get good crabs. It’s a dish you want to cook when you have a lot of time.”

This tasty dish is wonderful, but messy to eat. Don’t be bashful; you have the break apart the crabs and slurp the meat out of the shell. That’s part of the fun.

Ronnie said that, for the dish to come out right, it is important to cut the onions in half rings, not vertically or chopped. Also, if you like salt, you might want to add some before cooking. This dish is impossible to add salt to after it’s cooked.

Ice the crabs until they are no longer moving. Remove the backs, gills, viscera and legs, and discard. Remove and keep the claws. Crack both sections of each claw to allow the seasoning to get inside, but do not peel them. Hose any remaining fat and viscera from the crabs with a garden hose and set aside. Peel and slice the onions crossways in half circles. Pour the olive oil into a large Dutch oven. Put in a layer of onions in the Dutch oven, followed by a layer of crabs with the cavity of their bodies facing up. Claws should also be added with the bodies. Repeat the layers three times. Add the remainder of the onions on top. Sprinkle in oregano, thyme and rosemary. Season with NuNu’s seasoning to taste. Cover and cook on low for 3 hours or until the onions are browned and soft. Do not stir the pot while cooking. Serves 4-6.

“This recipe came from my dad,” Ronnie Sampey said. “He would cook it at camps. Normally, people cook sauce piquant with meat like rabbit, turtle or alligator. Most people I know have never heard of a redfish sauce piquant. I use fillets cut into chunks because I don’t like to fool with bones.”

Ronnie, by his own admission, uses oregano, thyme and rosemary in almost everything.

For this dish he prefers portabella mushrooms because they hold up better than white mushrooms.

The dish is ready to serve as soon as it flakes easily with a fork.

Cut the redfish into 3-inch chunks and set aside. Pour the olive oil and mustard into a large Dutch oven, and stir over medium heat until the mustard begins to form small balls. Add the onions and sauté until they become clear, stirring constantly to keep them from sticking. Stir the tomato sauce, rosemary, oregano and thyme into the onions. Add the mushrooms and tomato paste, and stir to mix well. Sprinkle in the sugar, cover and sauté until the sauce thickens and the mushrooms are tender. Pour in 1 cup water, NuNu’s seasoning, hot sauce and salt to taste. Add the redfish to the sauce and stir. Cover and cook on a low fire until the fish is tender, about 15 minutes. Do not stir until dish is served. Use a fork to test if the fish flakes easily. Serves 6.