Janelle Folse breaks all the rules. For one thing, she eats salads. For another, she thinks how food looks is almost as important as how it tastes.

A few years ago, we were cooking with a Cajun on Bayou Lafourche for one of our books in the Seafood Bible series. As usual, in spite of the food tasting very good, it was drab — brown and white. No matter how we tried photographing the dish for the book, it remained unattractive.

Finally, we asked him if he had something in the fridge with color to dress up the plate, like lettuce and tomato. He leveled a hard gaze at us and boomed, “Coon-asses don’t eat salads.”

But Janelle Folse breaks all the rules. She is a 24-carat bayou Cajun raised in Bayou Gauche and married to a Des Allemands boy, the famous “Crappie Psychic,” Clyde Folse.

“When I was a young girl,” she said, “I watched my mom and just picked (cooking) up. My father died when I was 9, and I was the one of the five kids that most enjoyed cooking.

“My mom cooked basic bayou cooking — gumbos, stews, jambalayas. She was a good cook but stuck on traditional Cajun recipes. I learned early on that I had a passion for cooking.

Janelle’s start in the kitchen

“Clyde’s grandmother, Mamere Louise Tregle Folse, inspired me and gave me confidence. She had a passion when she cooked and saw that in me. She pushed me out of my fears.

“I started exploring different tastes and recipes. I got really good at tweaking recipes. I wanted to keep my heritage, but I wanted my food a little lighter, and I wanted it to look appealing.

“Traditional Cajun foods taste good but look boring. I learned to accompany dishes with things that pop out: eye candy. 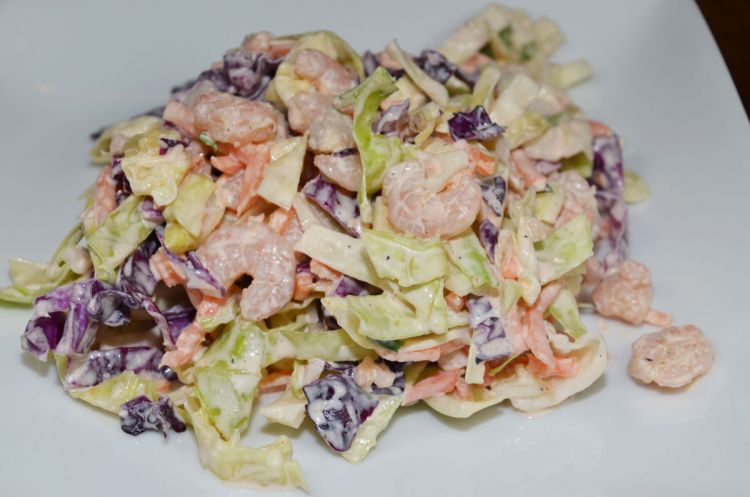 Janelle Folse modestly calls this a take-off on regular cole slaw, but we can promise you, it’s a lot more. Her homemade dressing really brings out the taste of the shrimp. She calls the dressing “the star of this dish.”

Usually, she serves it as a side salad, but in large portions, it is substantial enough to make entrees. She said that the longer this dish chills, the better it tastes, so you can make it well in advance, simplifying the number of things going on at once in preparing a meal.

Several tips: Be sure to measure the amount of hot sauce used for the dressing. The dressing can easily be ruined by overestimating the amount. Don’t substitute Tabasco Sauce for Louisiana Hot Sauce. If the lemon used isn’t at room temperature, microwave it for 10 seconds. Always roll a lemon to be juiced firmly underhand on the counter to break its internal membranes to get more juice. Finally, she insists that, although it’s messy, human hands do a better job of tossing the slaw than do large spoons.

Combine the first 8 ingredients in a bowl and whisk them thoroughly to blend, then set aside. Place the cabbage and carrots in a large bowl. Add the salt, pepper, olive oil and shrimp. Pour dressing, as desired, over the slaw. Toss the slaw by hand to mix thoroughly. Sprinkle the chopped cilantro on top of the slaw. Cover and refrigerate. Serves 8 as a side salad.

This is entirely Janelle Folse’s recipe. When she lived in New England for six years, she became fond of chowders but found them very lacking in flavor. So she decided she wanted to develop her own recipe, not as thin as a chowder nor as thick as a Cajun bisque.

“I made a seafood chowder which evolved into this Shrimp & Corn Bisque,” she said. “This recipe didn’t evolve from the corn soups so popular today. It is different than bisques, too, because it has potatoes.

“It is made with roasted corn, a really unique step. I never use straight corn in any recipe; it’s always roasted, seasoned and blanched, or marinated.”

Heat water, 2 tablespoons of salt, and 1 tablespoon of liquid seafood boil in a large pot until boiling. Simmer the potatoes in the hot water bath for 5 minutes, until slightly tender, and remove. Add the shrimp to the same water and bring it to a boil. Drain immediately. Pat the corn dry and drizzle oil over the ears. Sprinkle them with salt and pepper and rub the seasoning into the corn. Heat a heavy, frying pan, preferably cast iron, until the pan is hot but not smoking. Add the corn and roll until all the sides of each ear are toasty. Remove from the pan, cool, cut the corn off the cob with a sharp knife and set aside.

Melt butter in a large pot over medium-low heat. Add onions and turn heat to medium-high. Cook until tender, but not browned, stirring often. Stir in bell pepper and tasso. When the tasso darkens slightly, lower heat to medium and stir in corn. Cook 5 minutes. Fold in the potatoes. Do not over-stir from here on, as it will break up the potatoes. Sprinkle flour over the ingredients and fold it in. Do not dump the flour in one spot or it will clump. Add cream and stir gently until the cream thickens. Stir in the milk and add the parsley. Adjust salt and pepper to taste. Increase heat to medium-high. When the bisque begins to boil, stir in the shrimp and 1/2 teaspoon liquid seafood boil. Partially cover and simmer over low heat for 20 minutes. Serves 8.