Ricky Ruffin carries the twang of rural Mississippi, but make no mistake: He cooks as well as any born-and-bred Louisianan.

In fact, he ought to be an honorary Cajun. Besides doing all his fishing in South Louisiana, he cooks like the best of the bayou chefs.

The rural attorney fits right in South Louisiana’s culture. He doesn’t know a stranger; he loves to cook, hunt and fish.

And offshore Louisiana is the only place he fishes (See the feature, Blue Water Takedown).

About Ricky’s vegetable garden, she says, “He plants them; I pick them.”

Pam likes to cook, too, but she doesn’t call it a great passion like it is for her husband.

Ricky loves to catch it or hunt it, but if it doesn’t taste good he has little use for it. Besides white-tail deer beyond counting, he has taken numerous mule deer, five elk and two black bears.

“I tried cooking bear every way. I finally got it to where I could eat it,” he said. “I don’t like bear; it’s funky.

“I really don’t care for mule deer, either. It has a different wang to it.”

A bountiful garden, groaning with produce, sits beside their home. It has more than 60 tomato plants.

“I give them away,” Ricky explained. “I love to give tomatoes away; everybody loves tomatoes.

“You can make more friends giving away tomatoes than money.”

Ricky’s deer-hunting camp is on family land 4 miles from his home. Its walls are studded with mounted deer heads. He saves the most-monstrous racks for the walls of their beautiful, solid-cypress, cathedral-ceilinged home.

The home’s huge covered back porch is really an outdoor kitchen, with a double-basket propane deep fryer, a Green Egg and a commercial cook top with four 30,000 BTU burners.

Most of the wall separating the living quarters from the porch is glass and overlooks what can only be described as a huge green valley, with a herd of black baldies tended by cattle egrets drifting and grazing across the vale.

Ricky runs nearly 100 cows year-round, and 500 head of stocker calves on rye grass and wheat in the winter.

The Ruffin name is an honorable Southern name. A relative, the Southern fire eater Edmond Ruffin, fired the first shot of the Civil War at Fort Sumpter.

“My family stems from South Carolina,” Ricky said. “My great-great grandfather William Ruffin came to Jasper County, Miss., where he patented land in 1842.”

Ricky’s mother, Martha McAlpin’s great-great grandfather patented land in the county in the 1850s. This stem of the family became prominent cotton farmers.

Ricky’s father, William Thomas Ruffin, was in state politics from 1968 to 1976. He was also a county agent and a beef producer.

As county agent, his father led the way for areas farms to begin raising beef cattle rather than cotton. 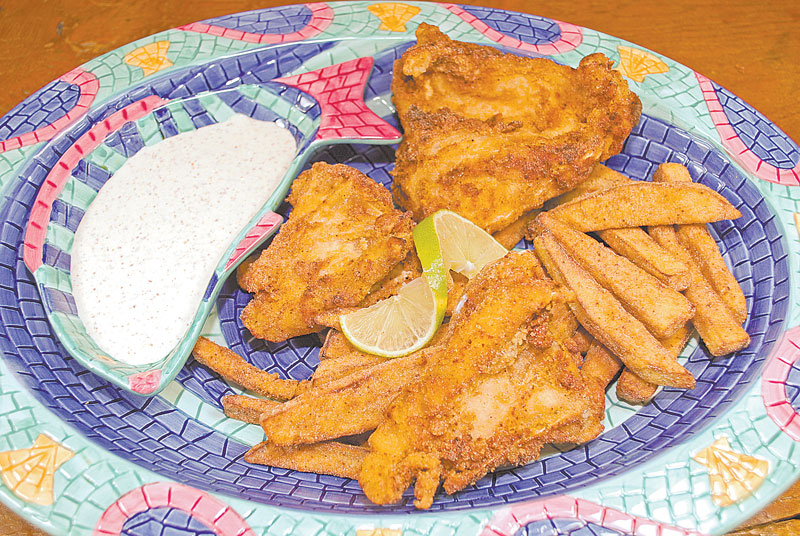 Some fish species have a delicious hunk of meat located ahead of the belly and below the head. The paired pectoral and pelvic fins are controlled by this mass of muscles called a “throat” by those in the know.

Throats are especially large in snappers.

“Most folks throw snapper throats away,” Ricky said. “Way back, my cousin B.G. Ruffin and I caught a big mess of snappers. While we were cleaning them, he said, ‘Don’t throw those snapper necks out.’

“That was the first time I ate them. For a while, the crew I used to fish with regularly gave them all to me. Now about half of them want their share.”

The amount of delectable white meat in a snapper throat is amazing.

What really sets these throats off is Pam’s remoulade sauce.

“I have no earthly idea where I got the sauce idea from,” she laughed. “I started this when Ricky planted some eggplants. Fried eggplant is kind of bland, so I made the sauce to go with it.

“Now all my neighbors want his eggplants to use with the sauce.”

Throats can be scaled or skinned. Ricky uses freshwater catfish skinning pliers to skin his.

Season the throats with Season All. Dredge the fish in the fish fry, then deep fry until golden brown. In a small bowl, combine the mayonnaise, creole mustard and lime juice. Stir to mix well. Serve as dipping sauce with fried snapper throats. Serves 4 as an appetizer. 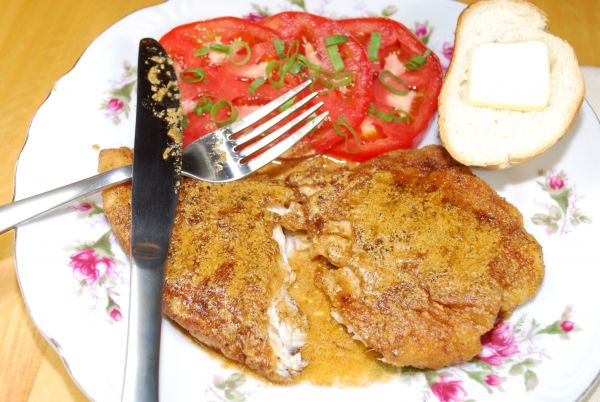 This is Pam and Ricky’s favorite recipe. It’s easy to do, so it can be done after work.

“You never know when he is coming home,” Pam said about Ricky. “We don’t cook anything until he gets here.”

“This is my own recipe,” said Ricky. “We like Parmesan cheese and we like snapper. Anything with butter, olive oil or cheese has to be good. We have been cooking this for 20 years.

“We can have this ready in 30 minutes. Often we serve it with homegrown corn, wild rice or pasta salad.”

Pay close attention to the fish while broiling, as it can burn easily.

Spread the butter slices over the bottom of a 9-by-13-inch baking pan and melt it in the oven. After the butter is melted, add the olive oil and lemon juice to the butter, and stir to mix. Season one side of each snapper fillet generously with granulated garlic and Season All. Place the fish, seasoned side down, in the pan. Sprinkle the back side of the fillets liberally with Season All, Parmesan cheese and paprika. Broil with the oven partially open for 10 to 15 minutes until the fish flakes easily when tested with a fork. Baste with the butter sauce halfway through the cooking. Serves 4.

Allowing more state control over red snapper was one of the hot topics at the American Sportfishing Association’s Sportfishing Summit. […]