Casey McLaurin and his fishing partners eat a lot of fish. They have to if they are going to eat everything they catch (See the feature story Double Fish: Double Fish).

Besides his family, the Lafayette resident spends most of his life tied up in hunting, fishing and cooking. Even his job as director of operations for Acadiana Outfitters in New Iberia is centered around the outdoors.

Growing up, McLaurin spent a lot of time at his family’s camp in Henderson.

“We would fish in the bayou in the day and cook in the evening,” he said. “We cooked a lot of game: ducks, doves, bec-croche, and gros becs. In those days everybody ate them.

“My dad, John McLaurin, is a good cook. Shrimp stew is his specialty. He cooks a lot on the grill and makes traditional Cajun dishes — smothered pork chops and smothered round steak, always with white beans.

“Both my grandmothers, Elaine Chaisson and NaNa McLaurin, were really good cooks, too. Grandmother Chaisson wouldn’t let me stir the pot when she cooked. She didn’t let anyone stir the pot; but she would let you watch.

“On Sunday, she always had a smothered pork roast, shrimp stew or crawfish étouffée, along with homemade macaroni and cheese, either a crabmeat or eggplant casserole, and cut-up cucumbers and tomatoes. I absolutely learned to enjoy good food from her.

“NaNa — she didn’t let anyone stir the pot either. She was more strict than my other grandmother. My favorite thing that she cooked was stuffed beef roasts.

“I get invited to a couple of hunting camps a year, and I cook there. One of my specialties is brisket with Dr. Pepper.

“This dish (smoky trout quesadillas) is new to me. I ordered some beef quesadillas in a restaurant. I said, ‘This is bad,’ so I decided to do them myself. My wife Rogell said they were fantastic. Then she had me try the dish with fish and then chicken. Fish was her favorite. I’ve done it with both snapper and trout. The worst part is flipping the quesadillas.”

We have a recipe of our own — a Mexican seafood adaptation — with Casey’s recipe this month.

Several tips for this recipe. A charcoal grill rather than a gas grill is necessary to give the dish its smoky taste. While any flour tortilla wraps can be used, Casey recommends Mission brand jalapeño cheddar wraps. If fresh pico de gallo is not available at your grocer, you may substitute any jarred chunky salsa of your choice.

Daigle’s Cajun Sweet Pecan Garlic Sauce is one of seven original sauces made by Gayle Daigle and her family of Church Point, in the heart of Cajun Country. If your local grocer doesn’t carry it, this and the other sauces may be ordered directly from the Daigles through the Internet.

Flipping the quesadillas halfway through cooking is the tricky part of this recipe. It is best done by baking each tortilla in a separate pan and placing a plate over the tortilla prior to turning. Turning it upside down will drop the tortilla into the plate, from which it may be slid back into the pan to finish cooking. 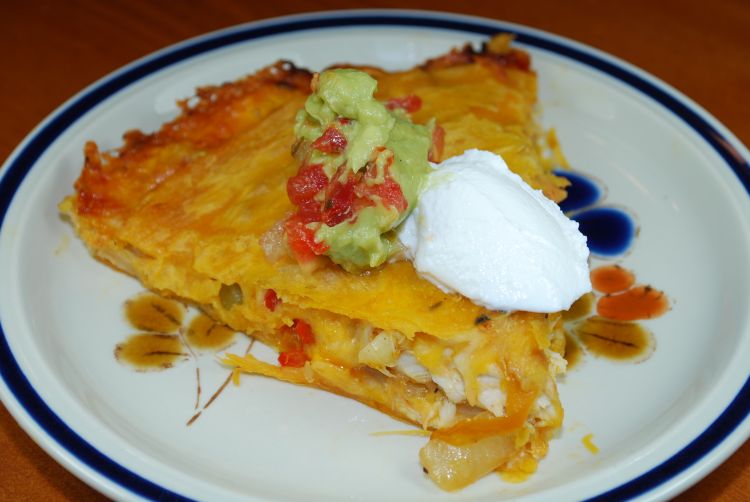 Cut each onion ring in half, break them apart and set them aside. Spread the fillets on a working surface, such as aluminum foil or a pan. Drizzle 3/4-cup Daigle’s sauce over the fillets and season to taste with the Cajun seasoning of your choice. 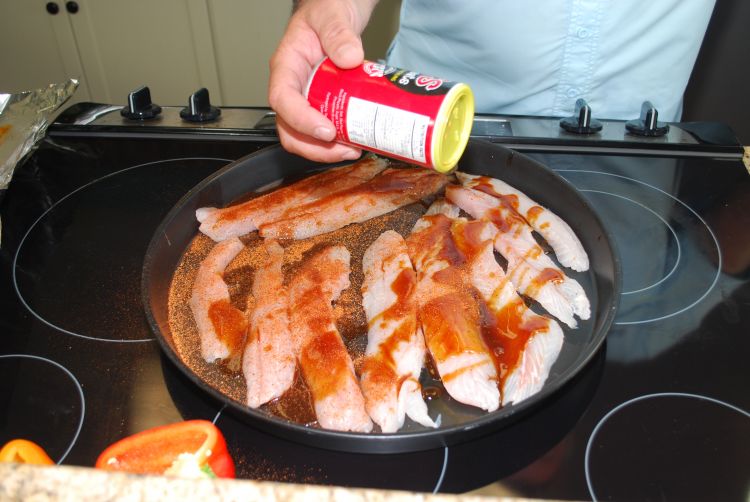 Toss the fillets to mix the sauce and seasoning over them. The fillets should have enough sauce to coat them thoroughly to make a glaze. More Daigle’s sauce may be added if needed.

Build a medium fire on a charcoal grill. While the grill is heating, line a large pan with foil and spray the foil with non-stick cooking spray. Spread the fillets over the pan, one layer deep. Space them as best as possible to avoid them touching each other. Spread the lemon slices over the fillets, set the pan on the grill grates and close the grill cover.

Cook until the fillets are lightly browned. Do not overcook. Remove the pan from the grill and set it aside.

Place onions and bell peppers in 3 tbsp. olive oil, season to taste with Cajun seasoning and sauté over medium high heat, stirring often to prevent burning. When the onions and peppers are soft, add 1/4 cup of Daigle’s sauce, stir in and set pan aside.

Lightly coat two tortilla wraps with olive oil on one side only. Place the tortillas, oiled side down, on a baking pan. Sprinkle 1/4 bag of Colby-jack cheese over each tortilla, followed by 1/4 bag cheddar cheese. Layer 1/4 of the peppers and onions over the cheese, followed by a layer of half the fish on each tortilla.

Spread a light layer of olive oil over each tortilla’s surface. Bake in a pre-heated 350-degree oven uncovered for 15 minutes. Carefully flip each tortilla and bake 15 more minutes.

Cut into wedges and serve with sour cream and guacamole. Serves 4.

We have coupled Casey’s dish with one of Glenda’s creations. Her version differs in some respects from other enchiladas: She really prefers flour tortillas over corn tortillas, the traditional ingredient for enchiladas. Also, she does not fry the tortilla or dip it in chili sauce before filling it. The chili sauce is added last. The end product is a wonderfully savory dish that you will be proud to serve to family and guests.

In a small saucepan, combine the cream cheese, green onions, 1 cup Monterey Jack cheese, and milk. Cook over medium heat for 4-5 minutes or until the cheeses are melted, stirring often. Add the crab meat and stir until mixed. Continue cooking and stirring occasionally until heated through. Spoon the filling down the center of each tortilla and roll it up. Place the enchiladas seam side down in a baking pan. To make the sauce, melt the butter in a 2-qt. saucepan over medium heat. Add the flour and stir for 5 minutes. Add pepper and stir in the lobster base. Cook for an additional minute. Add the milk and wine and continue to cook until thickened. Add the remaining 2 oz. of cheese and cook until melted. Spoon this sauce over the enchiladas and bake at 400 degrees for 15 minutes. Meanwhile, heat the green chile enchilada sauce in a small saucepan. To serve, transfer the enchiladas to plates and spoon the warm green chile enchilada sauce over the enchiladas. Serves 4.