June means it’s time to head to Grand Isle for all the trout and redfish action you can handle. Find out how this veteran guide stays on fish all summer long.

The wait is over and the action is full throttle right now in Grand Isle. Forget the trout scarcity of last year and get going now to satiate that pent-up craving for bent rods and screaming drags.

I invited myself aboard Capt. Keith ‘Herk’ Bergeron’s 24-foot Blue Wave to get in on the action he’d been telling me about.

“I’ve been going out every chance the weather gives me and catching fish each time — and not just a few fish but plenty, and not just small fish but very respectable trout,” Bergeron said.

He had my interest.

Then he sent pictures, and I had to go.

He said something about heading out for a trip with his girlfriend, Nancy Comeaux, and I invited myself aboard. I’ve learned you just can’t be bashful when it comes to fishing.

I pulled into the parking lot of Bridge Side Marina just after daybreak, and Bergeron was already there.

The Pair-A-Dice Charters owner and Comeaux helped get my gear aboard, and we got quickly underway. The captain wanted to get an early start because he had limited out on specks the day before with anglers in several nearby boats watching.

He figured they’d be parked in his hole if he didn’t beat them to it. The old expression that there is no honor among thieves should have included fishermen.

The fact is, there is no single spot that’ll produce fish this month. June is what makes Grand Isle grand, in that fishing action is spread out all over, and anglers can catch good numbers and good sizes of specks and reds all around the island.

“June is also when you want to be sure to bring a baitwell full of live bait: either shrimp or croakers or both,” Bergeron said. “It’s not that you can’t catch fish on plastics right now, but you’ll handicap yourself and make catching fish harder if you don’t bring live bait. I do fish with plastics until Buggy gets live shrimp and croakers over at Bridge Side Marina, and then I always get live bait if its available.

“If you want to fish plastics, I suggest H&H or Deadly Dudleys in opening night or opening night/chartreuse or the electric chicken color or blue moon color. Those colors have worked best for me when fishing plastic.

“But if you start catching with plastics and someone with live bait anchors nearby they’ll take your fish away.”

The first place you want to look for fish is along the beaches of Elmer’s Island and Grand Terre, he said.

“You’ll need fairly calm winds and seas, so when you get those kinds of days, get out and do the beach patrol,” Bergeron explained. “You’re looking for any sign of bait activity in the water: minnows running, shrimp jumping, bait swirling along the bank — whatever.

“When you find bait activity, stop and fish there. And you’re looking for birds in the surf. Seagulls in particular. So if you’re running the beach and you spot either bait or birds, that’s where you want to stop and fish.” 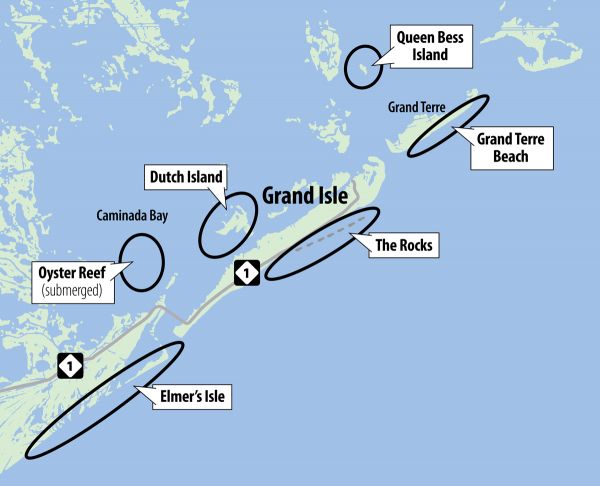 Bergeron said a common mistake people make is anchoring too close to the breakers.

“Use your depth finder and drop your anchor when you’re still in 3 to 4 feet of water,” he said. “You want to have at least a No. 13 anchor and a minimum of 5 feet of heavy chain to hold your boat in place.”

He also has a strong preference in what anchor he uses.

“I see some people using those grapple hook-type anchors, but I prefer a Danforth,” Bergeron said. “I also see some folks using their Power-Poles, but we’ve learned that’s a bad idea in the surf: The pounding will tear up your bushings real quick. We love the Power-Poles, but you want to use them in the marsh, not in the pounding surf.

“You can also use the anchor setting on your i-Pilot, and I’ve seen that work at times. The trolling motor works overtime to hold you in place and it can be noisy, but the noise of the surf seems to drown it out,”

The veteran guide said effectively holding a boat in place is about more than just chunking out the anchor (no, don’t do that) or even easing it into the water.

“Let out about 20 feet of rope and jiggle it a bit until it grabs and set the anchor so the flukes dig into the sand instead of just skipping along the bottom,” Bergeron said. “You have to anchor far enough out to allow for the boat to swing and drift, and you don’t want to wind up too close where you’ll get dragged into the breakers.”

Once you’re anchored on the beach, you’ll want to fish a Carolina rig with live croakers or live shrimp on No. 3 or No. 4 kahle hooks, 40-pound monofilament leaders that are roughly 18 inches long and ½-ounce egg sinkers.

“When I fish the inside with a Carolina rig, I’ll use a 3/8-ounce egg sinker so it doesn’t hang up on the bottom as much. But on the beach you want a headier sinker to deal with the surf and to give you additional casting distance,” Bergeron said.

How quickly you snatch the rod when you detect a strike differs depending upon the live bait being used.

“When you’re fishing with live shrimp and you feel a strike, you set the hook,” Bergeron said. “But with croakers you have to wait until you feel your line tighten up; trout will often strike a croaker, perhaps to stun it, but they don’t always immediately inhale it.

“If you’re too quick on the trigger, you miss it. Let the trout come back and take it, and as you feel the pull, set the hook.”

Even though it requires patient hooksets, Bergeron said he prefers using the baitfish over shrimp — but he stocks up on both before heading out.

“I love to fish with croakers this time of year because I think it produces better-sized fish,” he explained. “But don’t neglect to bring live shrimp because on some occasions they will out-produce the croakers,” he said.

While it often looks like one stretch of beach is as good as any other, Bergeron said there are some sweet spots.

“Another beach-fishing tactic that I use ­ and many of the regulars who fish the beach use it also — is to fish the deeper trenches that run out from the beach that form every year,” he said. “I do think I have a bit of an advantage as a full-time resident of Grand Isle, in that I get to run the beaches even in the dead of winter and see what they look like when the tide is low.

“I’ll mark those deeper ruts and drains and run-outs on my GPS, and come back and fish those areas in the spring and summer because they load up with the baitfish that attracts the trout and reds.”

These run-outs provide honey holes throughout the summer.

“Once you find those ruts, you can fish them all season long,” Bergeron said. “But you have to (locate new cuts) every winter because things change from the one season to another, especially if anything tropical shows up in the Gulf.”

The captain said another option is at the Grand Isle State Park rocks, which yield both specks and reds.

You can use the same baits as on the beaches — but you have to put up the Carolina rigs and move to corks or free-lining.

“I like to free-line croakers along the rocks, using no weight at all,” Bergeron said. “The croakers will try to hide up in the rocks, but you can usually pull them free and prevent a snag.”

He said the advantage of free-lining is that you can toss your bait right up against the rocks.

If that doesn’t work, he’ll turn to a cork.

“Try fishing the upcurrent side (of the rocks) on a rising tide with live shrimp under a cork, or you can also Carolina rig a live croaker along there but you can’t throw too close to the rocks or you’ll snag,” Bergeron said. “And you can fish a live croaker under a cork if you know how the cork will act with a croaker on it: It’ll wobble and bump and look all jittery like a fish is after it, but that’s just the croaker pulling it around.

Begeron said you also can fish behind the rocks on an east wind and get out of the waves.

High winds and rough seas can make fishing the beaches and rocks pretty much impossible, so what is the angler to do?

Fortunately, there is other action to be found.

“In June, the predominant winds are from the south and southeast, and anything over 10 mph makes it rough,” Capt. Keith ‘Herk’ Bergeron said. “That’s when we head to any of the more-protected areas like Manilla Village and Government Reef; Queen Bess, Independence Island and Dutch Island; and the structures and reefs in Barataria Bay like Hotel Sid and what we call the “Lighted” platform about ½ mile west of Hotel Sid.

“We fish those areas with the same baits and the same tactics, except I do tend to use a cork more in the shallow water, or if I Carolina rig I use a lighter egg sinker.”

Dutch Island is right behind Grand Isle, and offers good protection and produces some nice fish.

It’s very shallow on the north side because the island is disappearing and a lot of it is submerged just below the surface, so be sure you idle anywhere along that side.

The water bottom around Dutch Island has a lot of shells, so dangle live shrimp or croakers about 18 inches under corks, the captain advised.

“We do catch a lot of smaller trout around Dutch Island, many just over the legal size — but we also often catch trout in the 16- to 18-inch size,” Bergeron said.

A little south and west of Dutch Island in Caminada Bay is a big underwater oyster reef that consistently produces trout.

“It once was marked by white PVC poles, but my last trip out I noticed the poles were gone,” Bergeron said. “Maybe you can locate it on your depth finder. It’s in about 5 feet of water, and we fish it about 3 feet under a cork.

“You’ll probably have to anchor to hold out there.”

Queen Bess is one of those perennial hotspots everyone knows and everyone fishes because it continues to produce surprising amounts of fish year after year.

“I look for any current lines, and fish around that.

Just get ready to have company.

“You may have to get in line with a bunch of other boats, because it is a very popular spot,” Bergeron said. “It’s so crowded I don’t even go there on weekends.

Chas Champagne puts the Matrix Swim Shad to work on some big redfish in the shallows floating high and bright red. […]

About Rusty Tardo 360 Articles
Rusty Tardo grew up in St. Bernard fishing the waters of Delacroix, Hopedale and Shell Beach. He and his wife, Diane, have been married over 40 years and live in Kenner.