With the federal red snapper season lasting a mere nine days, you have to know how to maximize your time. This captain tells you how — and gives you tips for landing mangroves, as well.

The cluster of bananas sat forlornly on top of the dock piling.

Palmisano’s eyes popped wide open when he spied the telltale yellow of bananas through a plastic shopping bag.

First, Palmisano set the bag up on the bow deck, as if he didn’t know what to do with it. He left it there awhile, and then he came back and, using his fingertips as if handling something distasteful, removed the three bananas from the bag and gingerly placed them on top of the piling.

“Hey, Chris, there’s your bananas,” Ruffin pointed. “They are bad luck on a boat.”

Chris Newcomb just had a stint put in a coronary artery, and his doctor had him on a “no-anything” diet.

He retrieved the monkey fruit and put them back in the truck.

A 60-year-old attorney from Jasper County, Miss., Ruffin was making one of his four yearly offshore fishing trips with Frekey.

For this one, he set up a family trip. Brothers Jimmy and Jerry “Moose” Ruffin are Ricky’s cousins. Together, they own H-D Clutch and Brake Inc. in Richland, Miss.

Great company, they are full of one-liners and wit — all delivered with good-ole-boy mischievousness.

Chris and Hayes Newcomb are a father-son team from Jackson, Miss. Chris, the owner and co-founder of Newk’s Eateries that includes 81 restaurants in 13 Southern states, married Jerry’s daughter Lori.

Hayes is a student at Jackson Preparatory School.

Once out of the pass, Frekey discussed his day’s plan: They would fish mangrove snappers because of the generous daily limit of 10 per person for the first half of the day, and then they would run farther offshore to hidden and little-fished bottom structure to take advantage of the short federal red snapper season. 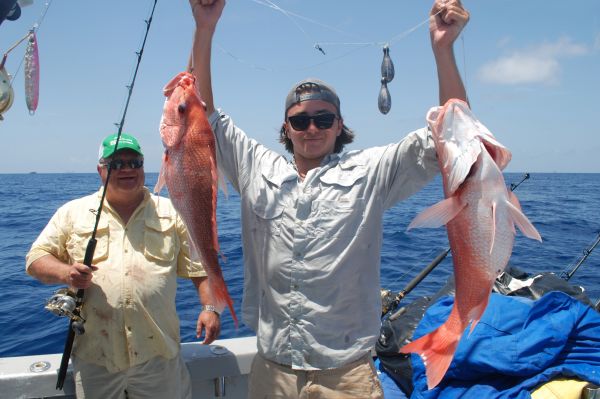 Fishing would start at 16 miles out, and the 32-foot Twin Vee catamaran would end up 60 miles offshore.

First stop for the gang was the South Timbalier 30 Field in 65 feet of water.

The crew tied the boat up to the rig downcurrent of one of the rigs, and one of them stood on the center of the bow and began tossing smashed-up pieces of pogies and Spanish sardines to the base of a rig leg.

The intent was to lure mangrove snappers into the open so the anglers on either side of the chum-tosser could present baited hooks to the feeding fish.

The mangrove snappers proved to be spooky, and the men had to toss their baited hooks very close to the rig’s leg.

“The dirtier the water, the better, until it gets to (Mississippi) river water brown,” he said. “Blue water is tougher.

“And this rig is tough: It is close enough in for bay boats to reach, so it takes a beating. These are educated fish and have seen plenty of lines thrown to them.”

The captain didn’t waste a lot of time there.

“One of the important things is knowing when to quit and move to another rig,” Frekey said. “When two or three casts per guy don’t produce, it’s time to go.

“A lot of times you can still see fish, but you need to leave.”

Understanding how much chum to deliver also is important.

“Chumming is feeding. If you chum too much they get full,” Frekey said. “The fish you do catch will come in with pot bellies.”

They caught nine mangrove snappers at the rig, including several real bruisers over 8 pounds, before they moved.

The next rig, still in the South Timbalier 30s, provided even more action.

Although they were already experienced fishermen, Frekey had the anglers coached to run — literally run — to the back of the boat after a hook-up.

“It gets (mangroves’) heads turned” and pulls them away from the rig’s leg, Frekey explained

If you don’t get them away from the leg, the barnacles on it will cut the line. Reeling and walking back keeps more-constant pressure on the fish than just reeling.

“Plus, it frees up space on the bow of the boat for the next angler,” Frekey said. “I fish four people on the bow, even if I have six on board. Everyone gets their turn in the rotation.”

By 9 a.m. the body count was up to 29 mangrove snappers and a stray red snapper.

For every snapper, they caught three bluefish — some of which they kept for later use as red snapper bait.

The third platform produced nothing but bluefish.

“You got to know when to move,” Frekey croaked as he cranked his engines.’

The fourth rig, still in the 30s, gave up only two mangroves.

Frekey bid Cantrelle to untie from the rig, and the guide began the long run south to the South Timbalier 140s.

The water there was so blue it was almost painful to look at.

“They’re here,” Frekey said from the bow as he tossed chum bits.

Although the mangroves were smaller than at the other rigs, they were plentiful. The men set up a regular assembly line of men rumbling from the bow to the rear of the boat, dragging unwilling away from the safety of rig’s legs.

They saved every hardtail they caught for making butterfly baits later.

When anyone complained about the size of the mangroves, Ricky bucked them up and at the same time made his priorities clear.

“That’s a good fish; it will make two nice fillets,” he would say. “That fish will cook fine — good, good.”

While they were running their total to 42 mangroves and the lone red, there was a lot of laughing as they tried to catch each other jerking to set the hook, the one big no-no when fishing with circle hooks.

“That’s one thing you’re not going to get a redneck out of doing — jerking the pole,” one bellowed.

Then they had to leave because, of all things, hoards of small but legal red snappers rose from the depths to join the chumming fun.

These weren’t the red snappers they wanted; they were going to target larger ones in deeper water after filling their mangrove limit.

After releasing several red snapper, Frekey pulled up and moved to another rig within sight.

The water was just as clear at that stop.

Standing on the bow, Frekey could see 60 or 70 mangroves, but they refused to budge beyond the rig’s legs.

Still, the men managed to put three more mangrove snappers in the boat before Frekey and Ricky conferred, and decided to make the one-hour run to hunt big red snappers.

The seas had calmed from the morning’s choppiness, and with that came oppressive heat. The boat run provided a welcoming cooling off.

He planned to fish what he called “pipeline crossings,” places where pipeline hardware such as valves protruded from the bottom.

“They get little to no pressure,” Frekey explained, “because almost nobody has the numbers for their locations.”

Frekey stopped his southeasterly run in 182 feet of water over what he described as a wreck. He planned to fish it, but just as important was checking on conditions.

He stopped the boat and let it drift to determine current direction and speed.

If water currents were too strong, he wouldn’t keep traveling to fish in deeper water. Fortunately, conditions were good, and the captain signaled the men to drop lines baited with chunks of cut hardtails.

The screen shot of the wreck didn’t show much — just a gentle rise from the flat bottom — but gobs of fish were suspended over it.

“Reel ’em up,” Frekey commanded. “These aren’t the fish we are looking for.”

He turned the boat south.

“This is a pipeline crossing,” Frekey declared.

They were after big game, so they put big baits on: a butterflied hardtail on one reel and big chunks of bluefish on the others.

Frekey slowly piloted the boat across the target spot 100 yards below.

On the second pass, Hayes and Moose hooked up. Each brought up two 15-pound red snappers up after gut-busting fights.

They got a lot of help from the others.

They were even harder on young Hayes.

“What are you doing?”

Frekey turned the boat for another pass.

This time, Chris and Jerry got hit.

“Where’s that ’lectric reel,” Jimmy grunted Jimmy in classic Mississppian as he leaned into the stubborn pair of fish.

“I see it; it’s only a single,” he sighed, almost in relief.

All three fish again were 15-pounders. Counting the 10-pound red snapper caught earlier, that made eight of their 10-fish combined limit.

Frekey made a fourth pass, and Jimmy and Chris got singles to fill out their limits.

They could have been clones in size for the other snappers.

The butterfly baits proved to be deadly effective on the big sows.

Their red snapper limit filled, Frekey turned the boat toward shore and ran to the Grand Isle 940s to try to catch the last five mangrove snappers needed to fill out their limita.

Jimmy and Moose, both in their late 60s, were impressive fishermen. They fished hard; they never slacked off or hunkered down in the shade.

As soon as the boat stopped, the men beat up on the mangroves they needed — nice-sized fish.

Before they started fishing, one of the crewmen baited a heavy rod with a butterfly bait and placed it in a holder near the stern.

Right after they caught their last mangrove, the heavy rod bowed over deeply.

As soon as Ricky secured the heavily arched rod in his fighting belt, Frekey barked the order.

The intent was to allow natural drift to take the boat away from the jungle of rig legs and cross stanchions before the big fish could wrap up and cut the line.

The big man had a fight on his hands.

“It’s a grouper,” he gasped out as he fought to break the fish.

“Yeah, it’s a shark,” Ricky spat through clenched teeth. “It’s fighting all the way up.”

Frekey stared deep into the blue water in silence, trying to catch a glimmer of the sea monster on Ricky’s line.

“I’ll be darned,” he said happily. “I’ve never been so happy to be wrong!”

The big lug finally blew to the surface like a crippled submarine.

The Warsaw grouper weighed 82 pounds at the dock.