If you smell something really good on the banks of the Vermilion River between Abbeville and Henry, you probably are passing the Menard residence.

In fact, the Island Crawfish Étouffée recipe included here is an original of Jeanne’s, who splits time with the Menards and her mother’s household on a rice-crawfish farm in Forked Island. She got involved in cooking through the 4-H program a few years ago, and now cooks for the farm’s workers.

The family’s cooking is often big-time. Their gumbos are cooked in an 80-quart crawfish boiling pot.

“Of course, we put boiled eggs in it,” Amanda quipped.

Extending a gumbo to feed a lot of people by adding boiled eggs is a Cajun thing, never found in New Orleans gumbos.

Although Amanda is from Larto in North Louisiana, her cooking has Cajun influences because her grandmother, Arlene Book, had South Louisiana roots. Amanda said her cooking is a mixture of things, including soul food.

Cookie, who Amanda described as “an old black lady who cooked at the deli her mother managed in Jonesville,” taught her how to cook foods like mustard greens, fried chicken, pork chops, and red beans and rice.

Ryan, the youngest of Dennis’ and Amanda’s crew, aspires to be a chef. He sacrifices some fishing trips to have meals ready when the rest of the family returns from their all-day trips. On the fishing trip on which I accompanied the family, we returned to a meal of beef sirloin tip roast cooked with carrots and sweet potatoes and sides of corn and salad — yummy!

One look at their spacious, well-kept yard, and you know this family loves to fish. They have their own boat ramp into the river and six boats, ranging from a 14-foot flatboat with a 15-horsepower Yamaha to a 30-foot Pro Sports ProKat catamaran with twin 200-horse outboards slung on the stern.

Jimmie is probably the most addicted to fishing. He baits rods and casts them into the river before bed. Rebaits in the morning. Then when he gets home from school, he starts all over again.

Hunting is as big a deal as fishing. Their home is slam-jam full of deer racks. They own a 34-foot camper trailer with four bunks in the back and a queen-size bed in the front, as well as a couch and table. All five kids hunt.

As mentioned earlier, the basic recipe for this dish is Jeanne’s, but Amanda and Nichole have tinkered with it.

All the family’s recipes list Bon CaCa Seasoning as their Cajun/Creole seasoning. Amanda said many brands are not an option for her because she has high blood pressure.

“This one has very little salt,” she explained. “We bring it everywhere we go and people like it a lot. Some of our trips are vacations, but most of them are to hunt — North Louisiana, Missouri, Kentucky, Tennessee.”

The fish used for this recipe can vary from freshwater catfish to red snapper. Jeanne’s étouffée is also excellent served in the traditional way over cooked rice. 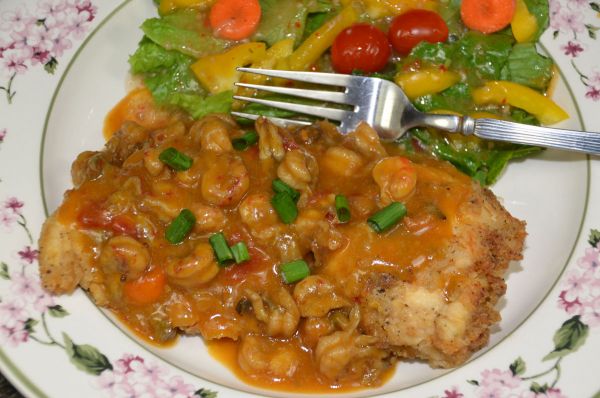 Put the fillets in the marinade and place in a refrigerator at least 2 hours before cooking. Add 2 tbsp. vegetable oil, onions and bell peppers to a pot. Sauté over medium heat, until the vegetables are clear and soft. Add the cans of soup and Rotel tomatoes, and stir well. Heat to boiling and simmer for 30 minutes. Add water if the sauce is too thick. Mix in crawfish, and then add garlic powder and Bon CaCa Seasoning and stir. Simmer for 45 minutes. Check and adjust seasonings.

While the étouffée is cooking, roll the fillets in the frying mix and fry them in vegetable oil. Plate the fried fillets and pour as much sauce as desired over them. Serves 8.

This recipe is Amanda’s own.

“I love those peppers,” she cooed about the pepperoncinis. “I can eat them right out of the jar.”

This recipe came about when she tasted some basic bacon-wrapped shrimp and thought to herself, “I can do so much better.”

Amanda and Dennis don’t consider this dish to be a main course, but rather serve it primarily as finger food at the big barbecue spreads they do for friends.

Shrimp cook quickly, so they are one of the first things off of the grill, along with Shrimp Boil Sausage they get from Shawn’s Cajun Meats in Delcambre and their own deer sausage.

Amanda prefers to use Oscar Meyer brand bacon because its slices are consistent. Some brands have thicker and thinner slices in the same pack, or a single slice will be thicker on one end than the other.

Cajun Blast Garlic Butter Basting Sauce in 10-ounce trigger spray bottles is commonly available in South Louisiana grocery stores. A suitable substitute can be made, Amanda said, by flavoring melted butter with garlic powder and putting it in a spray bottle.

Wash the shrimp and set them aside. Cut the bacon slices in halves. Remove the peppers from the jar, remove the stems and slice each pepper in half lengthwise. Fill the pepper halves with cream cheese and set them aside. Lay out a half slice of bacon on a flat surface, and place a shrimp across one end. Place a cheese-filled pepper half, cheese-side down, over the shrimp. Spray the shrimp and pepper with one squirt of Cajun Blast and season to taste with Bon CaCa Seasoning. Roll the shrimp and pepper up in the bacon slice and pin it together with a toothpick. Place the wrap on a baking sheet. Repeat until all the shrimp are used. Mist the finished wraps with more Cajun Blast and sprinkle more Bon CaCa to taste over the wraps. Grill the wraps on a barbecue pit, turning as needed. When the bacon is done, the wraps are ready to eat. Serves 8 as an appetizer.