Rick Barrios is a big, burly, bear of a man — nearly 400 pounds. With his dark hair and grizzled goatee he would be intimidating if his face didn’t constantly wear a big, open smile.

He and his wife Debra live and own a business in Jarreau on the banks of False River. The office of Barrios Construction is an interesting place: The huge book-lined office in front is a shrine to cypress, Louisiana’s eternal tree. It is solidly walled in pecky cypress.

The kitchen behind the office (yes, they have a kitchen in the office — this is Louisiana, you know) is even larger than the front room, and the cabinets are all built out of reclaimed cypress heartwood. A cypress island in the middle of the room holds his professional Viking range. Opposite it on a wall is a big, stainless steel, professional KitchenAid refrigerator.

He came by his cypress a unique way. Besides building piers, bulkheads and boat houses on False River and other lakes, Barrios Construction does demolition. He works for a fee and/or the materials he recovers: cypress windows, doors, planking and beams, as well as a lot of old heart pine and oak.

He sells most of it at auctions, but he keeps the best for himself

That’s what he does for a living, but his love is LSU athletics and cooking — big-time cooking.

“Anything and everything,” Debra laughed.

Cooking at LSU football and baseball games is where Big Rick really hit his stride. Football cooking was small-scale compared to baseball cooking; he served 40 to 50 people at football games, but 400 to 500 people was the norm at LSU baseball games.

LSU fans have almost made Omaha, Neb., the home of the College World Series, a permanent home. There, the LSU crowd is as well known for their food as their skill on the diamond. Rick was one of the cooks who started the tradition. He has made eight trips to Omaha following the team.

This recipe is one of Rick’s specialties. Most people simply fry frog legs, and there is absolutely nothing wrong with that. But this recipe expands the range of what can be done with frog legs. 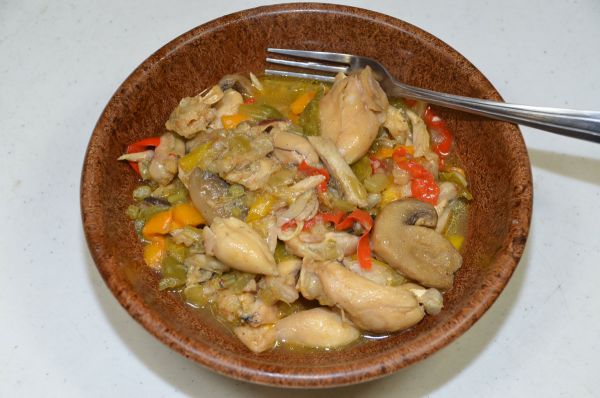 “When I was 13, I went to Grand Isle with a friend named John Haydel,” the big guy explained. “He smothered a turtle. My grandparents did a lot of smothering. I like smothering and started smothering everything.”

Rick prefers to use whole frogs rather than just the legs, but to do that he has to access local frogs.

“There are plenty of bones in the whole frog,” he grinned, “but they are worth picking through. When I have to buy the frogs, all I can get is the legs.”

While most Cajuns are familiar with smothering foods, I asked him to define the term for the rest of our readers.

“It’s cooking down seasoned meat in a pot with vegetables (onions, bell peppers, and celery) over a medium heat,” he explained. “Put a lid on it to capture the steam.”

Rick uses colored bell peppers, as well as green ones. They give the dish a “sweeter” flavor, which is natural because red, yellow, and orange bell peppers are ripe and green ones are unripe.

The pecan oil is a nice local touch, since Point Coupee Parish is famous for its pecans.

The finished dish has a lot of liquid, but Rick boasts none of it goes to waste.

“You’re going to want to drink the juice, so be sure and serve it with a spoon,” he said.

Pour 8 oz. pecan oil in a large pot. Add celery, onions, bell peppers and mushrooms. Stir to coat the vegetables with the oil. Add 2 qt. water, turn the heat to high, and cover the pot.

Add 4 oz. pecan oil and stir. At this point the meat should be beginning to separate from the bone. Taste a piece of the meat and add more Creole seasoning, salt, or pepper, if needed.

Cook 15 minutes and serve it in bowls when the meat is falling from the bone.

This dish is wonderful for large “get-togethers,” as Rick calls them, because it is simple once the shrimp have been wrapped. It cooks in the oven while he tends to other dishes.

Rick uses a lot of shrimp. For this and other dishes, he has purchased between 4,000 and 5,000 pounds of shrimp from Grand Isle per year.

For this recipe, he wants large shrimp — 9 to 12 count to the pound being his preference. He also prefers brown shrimp, something a little unusual in this white shrimp-crazy state.

“To me, they have more flavor,” is his explanation.

Rick is most particular in his choice of bacon, using only Hormel thick-sliced bacon. Besides having a great taste, the slices are more uniform. He doesn’t want some shrimp wrapped with a thick slices of bacon and others with thin slices.

This dish is a wonderful leftover, and heats up well in a microwave — that is if your guests don’t demolish them all.

Spread the shrimp tails on a large pan and season them liberally with salt, pepper and Creole seasoning. Be careful not to add too much salt, as the Creole seasoning has salt in it. Cut the bacon slices in half. Wrap each shrimp with a half-slice of bacon spirally to cover the entire shrimp. Place the shrimp snugly in a baking pan as they are wrapped. Pre-heat an oven to 425 degrees. Pour the Tiger Sauce evenly over the shrimp. Shake a heavy layer of garlic powder over the sauced shrimp. Rick cautions that it will look like too much garlic powder, but it isn’t. Place the pan in the oven and bake for 45 minutes or until the bacon on top is lightly toasted. Serves 30 as an appetizer.

Berwick bowhunter Duval Arthur Jr. has gone back to basics when he plans his deer-hunting excursions. That change has paid off. […]

Whitetails will feed right before a front moves through, then bed down during any wind and rain. Plan your hunts with this in mind. […]

Deer hunting can be an obstacle course

Plenty of stumbling blocks show up in a deer hunter’s way. Paul Meeks shares advice on how to avoid them and tag that big buck. […]