Dee Dee and Vern Becnel of St. Gabriel are a fun couple. Dee Dee is shy and modest, with a sweet smile. Vern is expansive and bold. and laughs with a hearty belly laugh; he wears a full, silver beard and is totally bald.

Dee Dee claims Vern talks too much, but she can hold her own. She has choice words about his beard.

“I hate his beard — I hate it!” she said. “It makes him look older. He looks like Duck Dynasty people.”

Vern gets huge enjoyment from Dee Dee’s annoyment (Yeah, I know it’s not a word, but it rhymes, and you know what I mean).

Somehow, this charming couple made it to 43 with neither of them having been married. They lived six miles apart and had never met.

Both are dynamite cooks. Dee Dee started cooking with her mother, Evelyn Landry Decoteau, when she was a little girl. Once on her own, Dee Dee became famous for, of all things, the “liver parties” she threw for eight or nine of her girlfriends who all loved calf liver but had husbands who didn’t.

She would fry it down, smother it with onions and gravy, and serve it with a choice of grits or mashed potatoes. She still cooks big batches of liver for family and friends.

“Cooking runs in Vern’s family,” Dee Dee. “People said that they always knew a good meal was on the table at the Becnels’.”

Vern’s father, Verney Sr., did 90 percent of the cooking. His mother Jeanette — or “Nannie,” as she was known — was into baking, according to Vern.

All of their kids — three brothers and one sister — cooked and still cook.

“There was a fight over the inheritance,” Vern said melodramatically. “We divided up the entire house when my parents died. There was no problem until it came to the kitchen.

“We spread the cookbooks out on the floor. My sister was the oldest and she got first choice. She picked the book that all the rest of us wanted. It was so old that rubber bands held it together. We went round and round until all the books were picked.

“Then we spread the pots out, and went round and round with them. Then we started trading with each other. It didn’t get nasty, but it did get interesting.”

Vern and Dee Dee love seafood. Their recipes show it.

A few hints from these crawfish experts: Do not rinse the tails. Instead, dump them directly from the packages to save the orange fat, because the fat is where the flavor is.

Rinse the bags the crawfish were packed in with a small amount of water, and empty that into the pot to get every bit of fat.

They also said to use only Louisiana crawfish tails.

“My father,” Vern said, “tried Chinese imports once when I was helping him cook. He ruined a whole pot of étouffée.

“They were rubbery and didn’t taste like crawfish are supposed to taste.”

The couple has different tastes in Creole/Cajun seasonings for their crawfish dishes.

Vern prefers Colonel’s Southern Seasoning made by Gonzales’ Terry Sanders. It is a local product and can be difficult to find unless purchased directly from Sanders.

The étoufée, which is Vern’s family recipe, calls for his brand and the flounder stuffing, Dee Dee’s recipe calls for her favorite.

As for your choice, take your pick or use your own favorite. 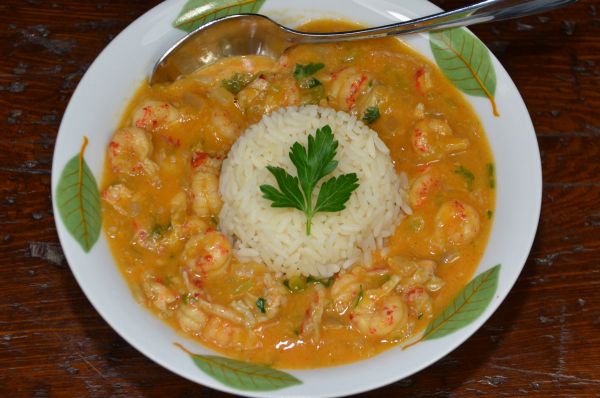 This is a classic scratch-made étouffée that showcases the taste of crawfish very well. Unlike many modern recipes, it uses no condensed soups.

It takes longer to cut up the vegetable seasonings than it does to cook the dish.

Vern pulled out the recipe written on old, yellowed paper. His mother got it in 1968 from a woman she worked with who came from Mamou. Vern’s sister and brothers also use this same recipe.

Dee Dee pointed out that the dish tastes even better the second day, after its had a chance for the flavors to marry in the refrigerator overnight.

Melt the butter in a large saucepan. Add the onions and sauté over medium heat, stirring often until wilted, about 5 minutes. Add the bell pepper, celery and garlic. Sauté, stirring occasionally until seasonings are soft. Add the crawfish tails. Cook over medium heat for 10 minutes, stirring often. Add 4 cup of water and stir into the mixture. Bring it to a boil and lower the heat to low. Simmer uncovered for 15 minutes. Stir in the green onion tops. Add the garlic powder and cayenne pepper, and stir. In a separate container, add just enough water to the corn starch to liquefy it. Add corn starch a little at a time to the saucepan, constantly stirring, until the étouffée reaches the desired consistency. Add salt and Creole seasoning to taste. Serve with cooked rice. Serves 8.

This recipe is original to Dee Dee and Vern.

“We just kind of made it up,” Dee Dee said. “It’s easy to eat — no bones. I love flounder, anyway. When we catch one, we always save it to stuff. Everybody wants our recipe. I tell them to let us know when they catch some flounders and we will come over to cook.”

“I saw a guy doing it, so I tried it and gradually improved my technique,” he said. “At first, Dee Dee didn’t believe I could do it.

“It freezes so good. You can just fold the fish up after it is deboned. Dee Dee came up with the stuffing on her own.”

They noted that shrimp can be used instead of crawfish, and that crabmeat can be added to either the crawfish or the shrimp version.

This dish is so scrumptious you will never again want to eat a flounder prepared any other way.

Melt two sticks of butter in a large skillet or saucepan. Add celery, onions, and garlic and sauté over medium heat until they are very tender, about 20 minutes. Add the crawfish and stir well to mix. Cook over medium heat until most of the liquid evaporates. Add salt and Creole seasoning to taste. Line one or two baking pans large enough for the flounders with extra-wide heavy-duty aluminum foil. Melt the two remaining sticks of butter in another pan. While the butter is melting, place the crawfish mixture, garlic powder, bread crumbs and eggs in a large mixing bowl, and mix the ingredients by hand until they form a smooth mixture. Brush the foil-lined pans generously with melted butter. Place the founders on the foil, dark side up. Season the insides of the flounders with Creole seasoning. Cut one lemon in half and drizzle the juice of one half over the insides of both fish. Reserve the other half lemon. Firmly pack the crawfish stuffing into the body cavity of each flounder. It might appear that the stuffing won’t fit into the fish, but with firm packing, smoothing and mounding, all the stuffing can be used. Fold the flaps on the flounder over the mounded stuffing. Squeeze the juice from the remaining lemon half over the exposed stuffing between the flaps. Drizzle melted butter over the surface of each flounder. Do not brush it on to avoid brushing off the lemon juice. Cut the remaining lemon into slices and spread the slices over the stuffing peeking out between the flounders’ flaps. Make a tent of aluminum foil to cover each flounder without touching it. Bake in a 350-degree oven for 15 minutes. Uncover and bake 10 more minutes. Test for doneness by gently tugging on the skin at the edges of the flaps. When the skin easily comes free of the flesh, the flounders are done. Serves 4.