Forget beards and racks. If you want your kid to really love hunting, take him on a squirrel outings, and teach him these techniques.

You can’t throw a high-school freshman in the middle of an LSU football game and expect him to have much success.

You can’t enroll a first-grader in college and expect him to make the dean’s list.

You also wouldn’t pluck your kid off his go-cart seat and put him behind the wheel in a NASCAR race.

There has to be a starting point.

This might be a perfect explanation as to why hunter numbers are dwindling all across the nation. The younger generations have put up a barrier and shut it out. As the old hunters die out, there aren’t very many younger hunters to take their place. Perhaps it’s because they never got started right.

I think too many well-meaning dads have put their young hunters in situations that they didn’t know how to handle. Taking a trophy buck or gobbler is hard work, and it’s over the ability level of many young guns. Sending a kid out to hunt for a trophy is like putting that high school football player on the field at Tiger Stadium after the sun goes down — he’s going to get overwhelmed.

Fishermen have long introduced their kids to their favorite outdoor sport by taking them fishing for bream before they let them try bass. Bass fishing is just too complicated and too uninteresting if the fish aren’t biting. Bream, on the other hand, are ready biters, and they provide enough action to keep the kids focused. Catching bream also teaches young anglers the skills they’ll need later in life if they choose to become bass anglers.

Hunters have a way to developmentally introduce their kids to hunting as well. Just like bream, the target should be plentiful and relatively easy to harvest while teaching the most important hunting skills. I can’t think of a better way to get kids interested in hunting than to spend a fall morning with them stalking squirrels.

Not only would young hunters learn important hunting skills if they were introduced to squirrel hunting at an early age, but perhaps they would get hooked enough to want to continue to hunt as adults. And, who knows, maybe the number of hunters would increase in the future.

Learning and using proper technique is just as important for beginning hunters as it is for the starting left tackle for the New Orleans Saints. Poor technique is hard to overcome even by someone with the best of ability. That’s why hunting parents like Sid Havard of Simsboro know that it’s important to attend the Louisiana Hunter Education course with your kids to see that they are getting the basic fundamentals of safe hunting.

“I took my son when he was old enough to attend,” Havard said. “I sat with him and studied with him to ensure he not only learned about proper hunting technique, but that he learned about hunting safety too.”

Squirrel hunting allows parents to make sure their kids apply this knowledge in the field. Other than safety and basic fundamentals, parents can teach their kids about still hunting and stalking while on a squirrel trip.

“What I tried to do with my son was to get out in the woods a couple days before our hunt to find a tree that wasn’t real tall, but one that squirrels were using,” Havard said. “I didn’t want him to have to hold a gun straight up and have it stomp him when he shot. We’d go and sit down near that tree on the morning of our hunt and just sit there and wait.”

After learning the still-hunting technique, Havard started taking his son stalking for squirrels. Rather than sit and wait on squirrels, they would stealthily move through the woods in search of them.

That’s why Havard spent so much time teaching his son how to move through the woods and how to traverse the terrain safely and stealthily. Every time they stalked squirrels together, his son, Chance, was learning something about what it takes to sneak up on one.

“I taught him to always know where his foot is landing,” Havard said. “He learned pretty quick that he couldn’t go through there haphazardly and expect the squirrels to sit still for him. At first, I always made him carry his single shot with the breech open, and I kept the shells in my pocket. I’d walk a few yards in front of him and point out good places to step and things to avoid.”

Once the father-and-son team spotted a squirrel, they used the opportunity to learn how to slip up to their quarry undetected rather than have one come to them. Havard taught his son how to move while the squirrel was distracted, eating or on the other side of a limb.

“That’s big stuff when a kid can sneak up under a squirrel and pop him out of the tree,” Havard said. “When a kid has learned to do that, I think he or she is ready to move on to other kinds of hunting.”

The key to taking any game is to go undetected by being silent. There isn’t a better way for a rowdy kid to learn the rewards of silence than by having his or her intended bushytail take off the other direction because of an unnatural noise. 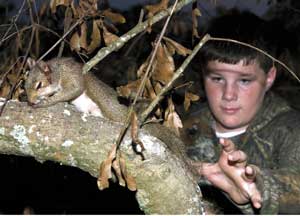 My brother Randall and I share several acres of hardwoods behind our houses. These are the woods we were sent to when our parents wanted a little quiet, and now these are the woods he goes to when he wants a little quiet. If he feels like taking one of his three noisemakers with him, he reinforces the fact that they won’t see many squirrels if they aren’t quiet.

“I tell them we have to keep our ears tuned so we can hear the rustling leaves or shaking branches that give a squirrel away,” he said. “I also try to get them to listen for the cutting sounds a squirrel makes while he’s up there in a tree eating an acorn. And if you’re really quiet and listening, you can hear the cuttings falling to the ground.

“Of course, staying quiet can also help you find squirrels when you hear them barking or chattering.”

Havard agreed about the importance of quiet, and said he used to make his son sit there and just watch and listen when squirrels appeared.

“I wouldn’t let him shoot them at first,” he said. “I wanted him to learn how to use his ears to detect the noises that indicate squirrel activity. By sitting there and watching what a squirrel was doing and learning to associate that with the sounds he heard, he was able to learn how to know what squirrels were up to when he couldn’t see them.”

Like most other young hunters, I got my start with a single-shot 20-gauge shotgun. I wanted a pump, but my dad always said that I shouldn’t be hunting if I couldn’t kill a squirrel with one shot.

Havard’s dad took it a step further. If his dad gave him five shells, he expected Havard to return with five squirrels. Obviously, our fathers put a premium on knowing how to make a clean shot.

“I think a single-shot 20-gauge is the best way to get a kid started,” Havard said. “I know a lot of folks put a .410 in their kids’ hands at first because it kicks less, but that’s really more of a specialty gun for trap shooters. A 20-gauge puts out more shot and makes cleaner kills with not that much more kick.”

A kid with only one shot also realizes that he or she must take their time and learn when to take their best shot if they want to kill a squirrel. They’ll quickly realize they should wait for an open opportunity rather than using the old Jerry Clower technique of “just shooting up there amongst them” and hoping something falls out.

Havard cautioned against handing a kid a .22 rifle.

“I’d never turn a kid loose with a rifle,” he insisted. “Those bullets can travel a long distance. If you’re taking a shot at chest level, and you miss, there’s no telling where that bullet could wind up, especially if a tree doesn’t clip it.

“My son is grown enough now that he enjoys the extra challenge that goes with shooting squirrels with a .22. But I know he’s responsible enough and a good enough shot to hunt with one.”

Havard’s instance that his son sit and watch squirrels for several trips before he actually let him shoot them allowed Chance to soak up lots of important information about his intended targets.

“I saw that grey squirrels are most active at first light,” the younger Havard said. “I also saw that fox squirrels tend to show up a little later. I learned things like early season squirrels are most often found in trees because that’s where the acorns are. And smaller things like noticing that fresh cuttings have brighter edges, which means squirrels have been feeding in that area recently.”

The elder Havard added that further observations taught his son that squirrels feed more actively in pleasant weather and that listening is just as important as looking on dry days. He also learned that dry days are better for still hunting rather than stalking.

“There are a lot of things going on in the woods while you’re sitting there waiting on a squirrel,” said Havard. “Learning to associate squirrel sounds with squirrels, when they come out, how they move from tree to tree, and the subtle squirrel movements to look for all go a long way in understanding the game you’re hunting. And understanding the game you’re hunting will ultimately help you take more game.”

All this real-world hunter education also has another advantage — it comes with minimal costs. It doesn’t require elaborate blinds or moving decoys. It also doesn’t require special stamps, additional fees or expensive camouflage. In fact, squirrel hunters have gotten along fabulously for years without much camouflage at all. A pair of jeans and a dark color shirt will do.

Many of us can look back at our childhood and remember fond memories of walking through the woods with our dads or granddads in search of squirrels. That’s how we were introduced to hunting. Somewhere along the way, though, we may have lost our focus and become seduced by big beards and bigger racks.

If you want your kids to grow up appreciating our hunting heritage, to learn the proper skills necessary to hunt big game and to form a special bond with you, take some time to do it right, and get them started with squirrels.

We researched the archives of LouisianaSportsman.com and came up with the 5 best-read stories of the year. […]