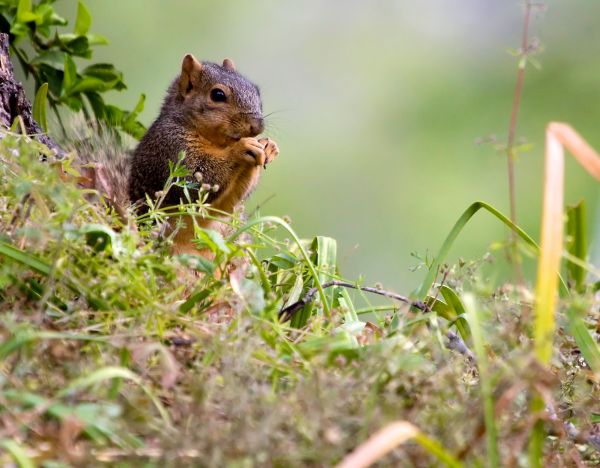 They might not be glamorous, but squirrel hunting certainly is more active than deer hunting — especially for kids just starting out.

Is it any wonder why so few people even bother with hunting squirrels anymore?

And even if there were a squirrel record book that recorded the longest tails of squirrels from all over the nation, squirrels would still suffer from a stigma that forces most non-squirrel hunters to wrinkle their noses in disgust.

“Limb rats, and they ain’t welcome in her kitchen,” is what avid Simsboro squirrel hunter Sid Havard told me was his wife’s reaction when he brings home three or four squirrels to fry.

Squirrels have become the Rodney Dangerfields of the hunting world, but they used to garner a lot more respect.

I grew up hunting squirrels with my grandfather’s single-shot .410 shotgun, not knowing at the time that it was probably more effective in the hands of an expert than a 12-year-old kid. All I knew was that it didn’t kick the stuffing out of me, and that it could kill a squirrel.

And I wasn’t alone. Kids all over Louisiana used to could hardly wait for Oct. 1 to roll around because that was the opening of hunting season, and there was no doubt where they would be on that first cool morning of October.

Even later in life when I found myself working as a teacher and football coach in North Louisiana, the opening day of squirrel season was easy to notice before I even took roll because so many of the boys’ seats were empty.

“People just don’t squirrel hunt anymore,” Havard lamented. “And there’s a reason for that. The difference between when we grew up and now is that when we grew up all the land was open. Today, if you’re not on a hunting lease you don’t hunt.”

With more kids growing up in cities and suburbs, finding land to hunt has become more of a challenge than it was 30 years ago. As those kids grow up and have kids of their own, they won’t even know what it means to go squirrel hunting, much less introduce their kids to it.

Some folks are fortunate enough to have their own land or at least have access to neighboring land, and Havard knows he has been blessed to have both.

“I’m fortunate enough to have a neighbor with 130 acres of hardwoods that I can turn my dog loose in the backyard and let him get after it,” Havard said. “And I own some creek-bottom land, but if it wasn’t for that I don’t know that I would even fool with squirrel hunting anymore.”

Havard went on to tell me that the big squirrel-hunting trend in North Louisiana for those who hunt with dogs is for hunters to pay the usage fee and hunt some of the local wildlife management areas like Jackson-Bienville.

“They kill them, too,” he insisted. “And they go to the WMAs simply because they can’t get on any other land.”

And even if they had land, Havard doesn’t believe he would be able to convince any of Louisiana’s bowhunters to put down their bows and pick up a shotgun come October.

“But I can tell you this: You can take a bunch of kids with you, a good squirrel dog and have more fun than you’ve ever had in your life. When you can take an unlimited number of kids that don’t have to be quiet or sit still, you’re going to get their attention because they’re going to have fun.”

If you want your kids to become lifelong hunters regardless of whether you hunt private land, public land or participate in a lease, you better make sure you start them right by starting them with squirrels.

All the boredom of deer hunting goes right out the window when kids are able to traipse through the woods following a good squirrel dog, never knowing what the next tree is going to hold.

“I think it’s kind of like bream fishing,” Havard said. “A kid is going to be bored really quickly with bass fishing because there’s so much down time and so little action.

“But take that same kid bream fishing so he can get a lot of bites, and watch. At that age, it’s more about the action than it is the outcome.”

Havard recalled a time when he took his young sons and four of their friends out on a squirrel-hunting trip when they were still in high school. The dog treed what they thought was one squirrel, but it turned out to be 14.

“Those boys killed 12 of those 14 squirrels, and shot until they ran out of shells,” Havard said. “That’s the kind of action you’re not going to get in a deer stand.”

If you’re looking to get your kids started out right with some squirrel hunting but you don’t remember much about hunting them yourself, Havard passed on a few tips for you to help make you and your kids see more squirrels.

First off, it’s a lot easier to spot squirrels in October when leaves are still on the trees. Although they might obscure the squirrels, they are a dead give away of a squirrel’s location when they jump from tree to tree.

“You can see that movement out 80 or 100 yards,” Havard said. “You can see that limb shaking. If the leaves were all gone, you would never see him. And it’s easier to slip up on one when leaves are on the trees because he’ll get busy cutting acorns, and you can get right up underneath him before you ever decide to shoot.”

The key to slipping up on a squirrel, according to Havard, is to move only when a squirrel is moving: As long as he’s busy or bouncing around plucking acorns, you have an opportunity to close the distance. When he gets still, you get still.

And because he’s trying to shoot squirrels that could be partially obscured by leaves, Havard carries a shotgun with him during the early part of the squirrel season during October.

“If you’ve got a squirrel up an 80-foot oak, and he’s cutting acorns, you might get a glimpse of his tail once in a while in that thick cover,” Havard explained. “With a shotgun, you can shoot him in that situation and kill him. But with a .22 rifle, which I use later in the season, you would never get close to him.”

Although he runs dogs later in the season, Havard likes to do a little still hunting for squirrels during October while scouting for areas for his dogs to run.

This is more of a sneaky approach than the not-so-subtle dog hunts to come.

“I slip maybe 20 yards and lean against a tree,” he said. “Stop, look and listen. Sometimes you won’t even see one, but you’ll hear the acorns falling.

“When you hear that, you can pinpoint where they’re coming from and eventually find him way up in the top of that tree.”

If he’s hunting with a partner, one of them will go to the other side of a tree in which they know a squirrel is circling to try to stay hidden. That forces the squirrel to move back to the side where the other is waiting with his shotgun at the ready.

But if’s he’s hunting alone, Havard takes a piece of rope or string with him to fool a circling squirrel.

“You’ll never beat him on your own, so you can take that rope and tie it to a bush on one side of the tree and then retreat back to the other side,” Havard said. “When you do, he’ll go back to the side where you got the rope tied up. Give it a couple shakes. He’ll see the bush moving and come back to your side.”

Does any of this beat watching a giant buck stepping into the edge of a food plot. Well, I’ll leave that answer up to you with this little caveat — how long will your kid have to wait to see that deer?

There’s no doubt where the most action is, and as long as you start him or her with squirrels, they won’t mind waiting for that big old buck as he or she matures as a hunter.

Beauty is in the eye of the beholder, and there’s no doubt that a squirrel cutting an acorn on an oak limb is more beautiful in your kid’s eyes than an empty food plot.