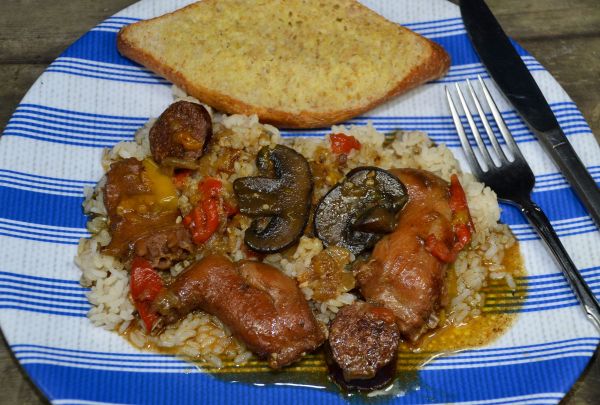 “We are just far enough north to have that country (twang) going on,” he said without a trace of Cajun accent.

His dad’s family stemmed from Texas, migrating down the Sabine River. His father was born on a houseboat at the mouth of Trout Creek. His mother’s family is of French descent, originally from the Lake Charles area.

“I watched my folks and helped cook. I was always interested in the cooking part of it,” he admitted.

Cooking and food is still a passion. Cheri, his wife said that, after she married Bob, she had to learn to cook game and to cook with rice. Her family, which is from Tennessee, cooked a lot of Midwestern dishes, like casseroles.

While Childress cooks all kinds of game, he is especially partial to squirrels.

“I can remember old-fashioned squirrel gravy from way back,” he said. “My dad and uncles would go off and hunt, and this was the dish that my dad cooked.”

Squirrels have some of the sweetest and whitest meat of all game animals, he said. There is nothing bloody or gamey about it.

Childress discards the rib cages of his squirrels when he cleans them because invariably the thin meat on the ribs becomes done before the larger pieces and the ribs fall apart, releasing small rib bones into the gravy. Many people who claim to not like squirrel are objecting to constantly picking these bones out of their mouths. The amount of meat lost by discarding the ribs is small, and the gravy is a lot more enjoyable to eat.

Also, for this recipe, Childress uses venison and pork sausage, but he said pure pork sausage is fine.

Finally, he strongly prefers cooking this dish in a cast iron pot.

“There’s nothing like an iron pot,” he said. “It just cooks so much better.”

Wash the squirrel pieces and set them aside. Add half an inch of cooking oil to cover the bottom of a large pot. Turn the fire to medium-high.

While the oil is heating, season the squirrel pieces liberally with Creole seasoning, onion powder and garlic powder, and mix the pieces by hand to coat them thoroughly.

When the oil is hot, reduce the heat to medium and add the squirrel pieces. Fry until browned, turning as needed. Remove when done and set aside.

Add the sausage rings and fry until browned. Remove and set aside.

Dip out and discard three-quarters of the oil in the pot, being careful to leave the food particles in the pot. Add the onions and peppers, and cook until they are partially softened, stirring often. Do not overcook.

Cover and bring to a boil. Reduce heat and simmer for 1 ½ hours or until squirrels are tender.