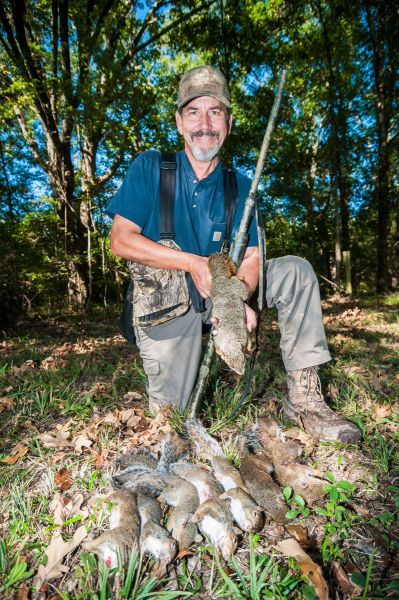 Learn to fill your limits by following this expert’s guidelines

Keith LaCaze is a lifelong hunter, and he chases pretty much everything that lives in the wild. Deer, hogs, rabbits, squirrels and wood ducks — they’re all on his hit list.

But when temperatures begin to cool, what he really likes to do is stalk the woods on The Bird Camp Hunting Club near Boyce, La., for tree rats. And, while he’ll pull out his shotgun if he thinks the squirrels will be on the move, his preference is to spend cool, still mornings picking off squirrels with his scoped .22.

Here are his top 5 tips for squirrel-hunting success:

OK, it’s no surprise that finding where squirrels are eating means upping your odds of killing a limit. But LaCaze said that basic rule is vitally important.

“Pine, hickory, acorns, beech,” he said, ticking off the possibilities. “You want to find some cuttings.”

And understanding the difference between squirrel cuttings and deer munchings is just as important. The former will be cast-off nuts with discernible teeth marks, as opposed to broken-up pieces of mast. Of course, there’s not much other than squirrels that each pine cones, so if you find pieces under a tree you can be pretty sure squirrels are feeding there.

Those wide-open oak flats sure are pretty, but it’s much more difficult to stalk through those areas without getting busted by keen-eyed squirrels.

“If you’re in an open flat, they can see you a long way before you see them,” LaCaze said.

And if a squirrel — especially a cat squirrel — sees you moving around, the last thing you’ll see is its tail as it heads to the next county.

“You’re better off in edge areas,” LaCaze said. “They like that because they feel safe. Look for those viney areas — they like to use those vines for travel routes.”

“Listing is as important as looking,” LaCaze said. “Listen for squirrels cutting and limbs swishing.”

Also listen for barking squirrels. When one of those little devils is mad, it will often sit for a long time making its displeasure known.

Once you pick up the sound of a squirrel working a tree, you can make a plan of attack, keeping No. 2 in mind.

4) Move until you find them

Not every tree will hold squirrels, so there’s little reason to sit in one place for long.

“I like to hunt where I’ll ease along pretty good until I find one,” LaCaze said. “And then I’ll slow down. If you’re not seeing any movement, it’s best to move along until you see some (activity).”

No, this isn’t in direct conflict with No. 4. LaCaze said he sits for a few minutes after locating a squirrel because the odds are more are in the immediate vicinity.

“If you see a squirrel or two, it’s best to slow down and hunt real slow,” he said.

That’s his rule even if he shoots a squirrel. Who knows: You might have found a den tree — which can produce a number of shots —  but you’ll never know if you just shoot a squirrel and then quickly move to another spot.

Camouflage is important because squirrels can pick up the smallest movement, but LaCaze said it’s particularly vital when hunting with a rimfire.

“If you’re hunting with a .22, where you’ve got to have (the squirrels) sitting still, camo — including a face mask — really helps,” he explained

If you’re hunting with a shotgun, the face mask can be left at the camp.