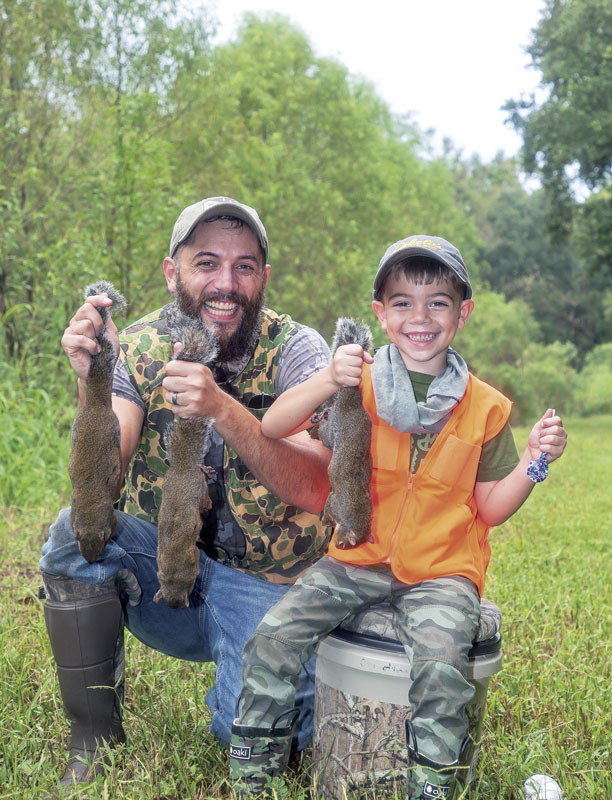 Hunters have a buffet of prime public bushytail hunting grounds

There were just a few remaining stars left in the sky as twilight gently nudged them away while my son, grandson and I quietly walked along a levee to a grove of live oak trees on Bayou Teche National Wildlife Refuge.

It was opening day of the 2021 squirrel season and though it was Oct. 2, with an ever so slight tease of fall in the air, we knew by 8:30 it would start warming up and take us back to summer again.

This little expedition to hunt squirrels started out with a call from my son a few days before the opener when he said, “Dad, I want to take Eli squirrel hunting. Do you know a place where we can all go?”

He sort of caught me off guard, as several years prior I gave up our hunting lease and no longer had a place to take them. It only took me a few seconds to regroup and I said to him, “Sure. We’ll go to the refuge.”

Bayou Teche is public land close to the house, an easy place to hunt, and literally full of squirrels. What’s more, it would be a great location to expose a 5-year-old to hunting.

“If that works for you,” I told him. And with that we had plans for the upcoming Saturday opener.

Quite honestly, in the state of Louisiana there are thousands of public acres where small game hunters are able to hunt squirrels. Many of these are listed in the Small Game Forecast elsewhere in this month’s edition of Louisiana Sportsman.

The Louisiana Department of Wildlife and Fisheries maintains 1.6 million acres of Wildlife Management Areas. Kisatchie National Forest has some 604,000 acres. Bayou Teche National Wildlife Refuge, where we decided to hunt, is made up of 9,028 acres and is one of 23 national wildlife refuges in the state.

What more can Louisiana’s small game hunters ask for? Across the state, there’s plenty of public access, a large squirrel population, a liberal bag limit of 8 squirrels per day and a season that runs from the first Saturday in October to the last day in February.

Louisiana Department of Wildlife and Fisheries Small Game Program Manager, Cody Cedotal, said there is suitable habitat for squirrels found throughout the state and harvest rates are typically low, thus, the reason for the long season and unchanged bag limits over the years.

In describing the differences between the two species besides the obvious color variation, Cedotal said, “Gray squirrels seem to be more habitat generalists and can thrive in a wider variety of locations. Fox squirrels generally spend more time on the ground than gray squirrels and tend to use more open forests with sparse understory for the most part.

“And, although gray squirrels do forage on the ground,” Cedotal continued, “they tend to stay in the forest canopy more and typically select sites with relatively dense and/or understory cover. Both species use cavities in live or dead trees as dens, whereas leaf nests are used for resting, escape cover and rearing young.”

By the time my son and I got situated in the twilight beneath a couple of old growth live oaks, we noticed the gray squirrels were already in the upper reaches of the canopy. The little grays were working over the acorns pretty good and dropping more than they were eating. Every few seconds you’d hear a hollow thump sound much like the beat of a snare drum, when the acorns hit the palmetto bushes below.

First time in the woods

Being his first time in the woods, my grandson was taking all of this action in. His smile reflected someone who was clearly enjoying the various stimulations that have to be experienced to internalize. When my son shot and killed our first squirrel of the morning, we could have left the woods right then and there. It was pretty much mission accomplished as far as introductions go for my grandson.

One thing we noticed right away was how quickly the gray squirrels went right back to foraging in the canopy again. That seemed to be another difference between gray and fox squirrels worth expounding on.

One of my good friends from work, Tony Guillory, grew up hunting squirrels around Pine Prairie. Pine Prairie is located above I-10 and about a 45-minute drive due north of Crowley. According to my buddy, they hunted both gray and fox squirrels in his region of the state. In sharing our opening day hunt, he agreed it wasn’t uncommon to find a spot where you might find several gray squirrels.

He too had experienced grays being less cautious to what’s going on below, especially if you were well concealed.

Guillory said, “John, back home we found that grays seemed to like thicker stands of trees that have lots of leaves and undergrowth. Sometimes it was hard to walk through. But, sure enough you’d shoot a gray, and a few minutes later, when things died down, they’d come right back, and you’d shoot another one. For fox squirrels, we’d have to walk a bit more and hunt more open woods on hilly ground. The thing is, once we shot at or killed a fox squirrel, we pretty much had to go find another spot to sit, because they weren’t coming back — at least not for a long while.”

Cedotal mentions that there’s no shortage of food sources for squirrels and expounded on how their numbers are directly linked.

On opening day last year, we didn’t stay in the woods too long because dad didn’t want to ruin a 5-year-old’s first hunt. It’s best to dole out those experiences in small doses at first, as youngsters often have short attention spans.

However, because the particular spot we hunted appeared to be loaded with squirrels, I made a hunt the following weekend and scored a limit of gray squirrels in short order.

One of the things hunters need to be aware of when hunting on public land is they need to get very familiar with various “refuge” regulations. NWRs require the use of non-toxic game loads when hunting small game on these refuge systems.

This can be problematic, because most non-toxic (steel shot) game loads are designed for waterfowl. Most of the waterfowl loads you find on the shelf come in No. BB, 2, 3, and 4 shot loads, where most squirrel hunters use No. 6 lead shot when hunting on private lands.

When squirrels are 30 to 40 yards up in a tree foraging and the leaves are thick, they can be difficult to bring down. Two loads I recommend for squirrel hunters who hunt on National Wildlife Refuges are Kent’s TealSteel that comes in No. 5 shot size and Hevi-Shot’s Hevi Teal that comes in No. 6 shot size. Both of these rounds are 12-gauge, 3-inch loads and are much like shooting any of the high-brass No. 5 and No. 6 lead loads we grew up with before non-toxic shot became a thing.

Be aware, when it comes to steel shot loads, try and stock up early. Due to COVID and subsequent supply chain issues there have been shortages of non-toxic waterfowl loads the past couple of hunting seasons.

It’s also important to note that state WMA and NWRs have specific regulations concerning check in, permits and game harvest reporting. Prior to hunting any of our state’s refuge systems, take time to read and learn about specific regulations. It may spare you a long conversation with one of our LDWF Enforcement guys and turn what otherwise was a good day in the woods into an aggravated ride home.

With plenty of public land across the state, an overall under harvested squirrel population, and a generous bag limit there’s no reason you shouldn’t be in the woods hunting squirrels this month. It just takes a little planning.