Justin and Jessica Head catch a lot of fish, they cook a lot of fish and they eat a lot of fish. The youthful couple lives in Dularge in Justin’s parents’ camp, Le Crabe Bleu, while they are building their home in nearby Theriot.

Justin doubles as a Baptist minister and a charter fishing guide, the latter of which is how I met him (see the feature Pack and Paddle). Those sound like mutually exclusive occupations, but they actually dovetail quite well for the dashing young preacher.

“With my church work, I have a fluid schedule,” he explained. “Guiding is in my skill set, and where we live, fishing is excellent.”

Justin grew up in a hunting and fishing, live-off-the land family in Terrebonne Parish. He learned how to teach people to fish by taking some of his dad’s clients on trips starting when he was 13 years old.

He met Jessica while she was in college at the University of Louisiana at Lafayette and he worked with youth at an established Lafayette church she attended.

They knew each other for four years before they began dating. While dating, they began cooking together — something they still do today.

Jessica didn’t know much about Cajun cooking until she met Justin. The blue-eyed, pig-tailed, strawberry blond originally hails from Vidalia directly across the Mississippi River from Natchez, Miss.

She learned the art of catching redfish after following Justin to his calling as minister of the Bayou Dularge Baptist Church.

While Justin is guiding and doing church work, Jessica stays busy home-schooling their brood, which includes four daughters and a newborn son.

As busy as they are, they make time to go fishing together and often take their children. The fish they catch form a big part of their family’s diet.

But they cook more than fish. When I walked into their kitchen, Jessica was busy frosting a devil’s food cake with peanut butter icing — the fruits of her Christmas present from Justin, a baking class.

For his part, Justin loves to cook game — deer, squirrels and rabbits.

“I started cooking sitting on my grandmother’s counter at 2 years old,” he said with a grin. “I did that until I was really too big to sit on the counter anymore. I love being in the kitchen when people are cooking.

This is a versatile recipe that can be made with any white-fleshed fish: saltwater or freshwater.

Justin credits the dish to his father Stanley.

“Where he got it from, I don’t know,” he said. “This sauce really gives the fish an extra kick.”

That’s a good description. It’s sweet from the marmalade and sour from the vinegar, and its good all over.

“Justin is known for his sauces,” Jessica said. “His family holds family dove hunts. Justin wraps the dove breasts in bacon, stuffs them with jalapeño and onions, and grills them. He makes a fig sauce to dip them in.”

Justin does offer one caution: Unless the stove used has a professional hood and vent, bronzing the fish can smoke up the kitchen, so cooking this recipe outside might be a good option.

Although this is Jessica’s dish, it’s not something she grew up with.

“They don’t make sauce piquants in Vidalia,” she said.

Justin’s family made sauce piquants using game, but she wanted a version for fish. She did some research on basic sauce piquant recipes and adapted them to her taste.

When Justin first told me about making a sauce piquant in under an hour, I found it hard to believe that one could be made without hours of simmering to mellow the harsh tomato bite.

Jessica added that cayenne pepper or hot sauce can be added to increase its spiciness. I found it delightful as is. 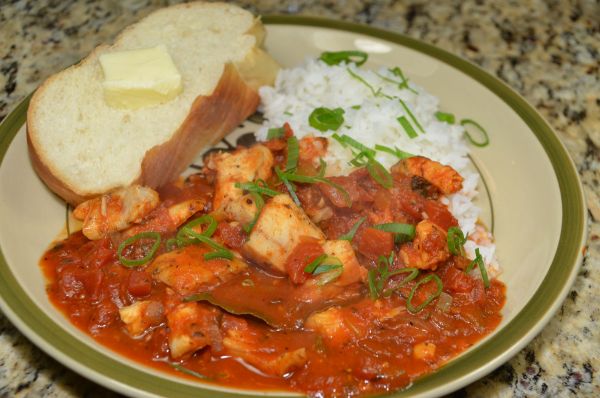 She usually makes this dish with redfish, simply because the couple catches so many. It will work well with any white-fleshed fish; in freshwater, catfish would be a great choice.

Sear the fish fillets in the olive oil over medium-high heat until done. Remove from pan and set aside. Add onions, celery and bell pepper to pan, and cook over medium heat for 5 minutes, stirring often. Add garlic and parsley and cook for 10 minutes or until seasonings are tender. Add tomato paste and cook 5 minutes. Add the canned tomatoes, chicken stock, Worcestershire sauce, bay leaves, thyme and basil. Add salt and pepper to taste. Cover and simmer for 30 minutes. Cube the cooked fish into 1-inch pieces and add to the pot. Cook only long enough to heat the fish thoroughly. Stir very little to prevent fish from falling apart. Serve over rice with slivered green onions for a tasty garnish. Serves 8-10.