Folse expresses herself in the kitchen

Imagine our surprise when we walked into Janelle Folse’s Raceland home and she declared that she was going to prepare a Cajun stromboli for us, as well as another interesting and different dish, fish tarts.

Stromboli is in fact an Italian preparation, and Janelle is Cajun French, who grew up in Bayou Gauche as a Badeaux.

But as we learned with her before, she can cook literally anything.

This was going to be a daunting task for us. Making dough from scratch and baking fresh bread is not in our repertoire — but Janelle didn’t bat an eye.

The wife of famed “Crappie Psychic” Clyde Folse says cooking is how she can express herself.

“It’s something I have control over. I can express myself through my cooking. It’s my therapy.”

She stays busy now Monday through Saturday with the family Crappie Psychic business answering phones, filling orders, managing inventory, ordering raw materials and helping out at trade shows. “But I make time to cook,” she smiled “It’s something I love to do. I’m selfish.”

Janelle describes the bread for this dish as a “hearty bread. It’s not a tender bread. It’s made to hold a filling.

“Once you get the bread part down, you can get creative with fillings: Beef, pork, venison, or sausage, peppers and cheese.”

But you need patience for this recipe. The bread must be kneaded for 6 minutes, absolutely no more than 8 minutes. Over-kneaded dough produces dense bread. “When it is right, it will feel rubbery,” is how she explained it.

A few tips: When making bread, it is important to use precise measurements. Also, the flour should be spooned loosely into the measuring cup and not packed. Packed flour may make the bread tougher and heavier.

And be sure that the liquid ingredients used in making the bread are at the right temperatures, and that the yeast is fresh to get a good rise.

Before dicing the onion to put in the sauce, Janelle likes to cut it in half and soak it in ice water for 10 minutes to remove the sulfur. Make sure the onion is covered with water. Wipe the onion with a paper towel before mincing to remove excess water. 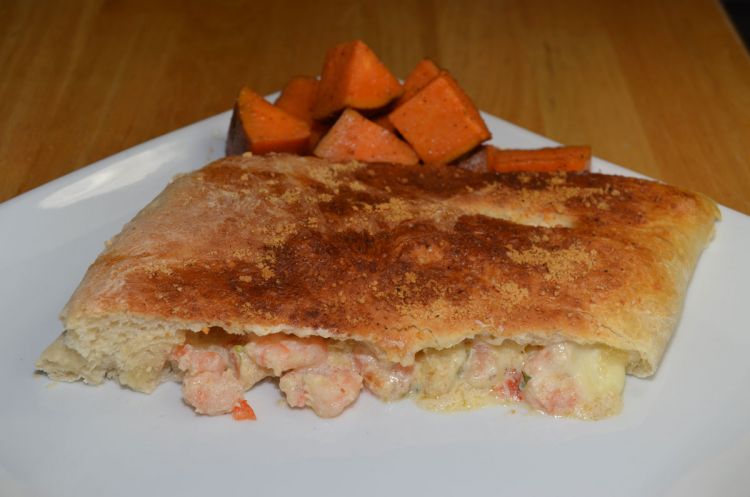 Preheat an oven to 140 degrees, then turn it off. As you are making the dough, the oven will cool to a temperature needed for the dough to rise.

To make the dough, add 5 cups flour, sugar, salt and yeast to an electric mixer’s bowl. Mix the dry ingredients with the mixer set on its lowest speed. Prepare the liquid ingredients by heating them to between 120 and 130 degrees. Use tap water instead of using the microwave, as the microwave tends to heat liquids unevenly. The milk may be heated in the microwave but should be stirred to distribute the heat evenly. It is important to use a thermometer to test temperatures of the water and milk. Add the water and milk to the bowl and turn the mixer speed up to medium-low to incorporate the liquid ingredients. Melt 2 tbsp. butter and add to the bowl. On a clean dry surface, spread a generous coating of flour. Flour a rolling pin and dust your hands with flour. Dump the dough from the mixer and on the floured surface. Shape the dough into a ball. Then knead it by flattening the dough ball slightly. Fold it over and then push it out with the heels of your hands, then turn it a quarter of a turn and fold the dough toward you, then knead it outward again. Repeat this process for six minutes. The dough will start to feel rubbery when it’s ready. If the dough gets sticky, add flour to the kneading surface and your hands. Don’t over-knead the dough or it will become tough. Put the oil into a large bowl and coat all sides. Place the bread in the bowl and turn it to coat all the dough’s surfaces. Place a clean, lint free cloth over the dough and put it in the pre-warmed oven to raise for 45-60 minutes.

While the dough is rising, and before making the filling, heat a pot of water lightly seasoned with salt and seafood boil on low to be used later. When the water nears boiling, turn the heat off, but leave the covered pot on the stove. Melt 1 stick of unsalted butter in a large pan. Add onion, green bell pepper, and red bell pepper, and sauté over low heat until translucent, then set aside. In a separate pot, melt 1 stick unsalted butter. Add 1 cup of flour and stir constantly until incorporated to create a blond base. Do not brown the flour. Slowly add the heavy cream, stirring constantly. The filling should be the consistency of a thick paste. If the sauce is too thick, add milk or cream. If it is too thin, add flour until the right consistency is achieved. Stir the onions and peppers into the base to incorporate them evenly. Add hot sauce, Worcestershire sauce, Creole seasoning, liquid seafood boil, and lemon juice. Stir to blend well. Taste to adjust seasoning as desired. Stir in the parsley and green onions. Put the shrimp in the pot of hot seasoned water and allow them to set until they just turn pink. Do not overcook. The shrimp will cook further in the base. While shrimp are draining, check the crabmeat for shells. Add both to the base pot over medium heat. Cook until any excess liquid has evaporated.

Spray two 15×10-inch baking pans with non-stick cooking spray. Again flour the dough kneading surface and the rolling pin. Using a fist, punch the raised dough in the bowl in its center to deflate it. Dump the dough onto the floured surface. Knead the dough a few times, then divide it in half. Sprinkle flour to coat both pans. Place half of the dough in each pan. With the rolling pin (or a drinking glass if the pin is too large for the pan) roll the dough in all directions, stretching it out into a rectangle to cover most of the pan. Use your hands to finish flattening the dough close to the length of the pan. The dough should be about 1/4-inch thick. Layer slices of provolone cheese in a row down the center of the dough. Spread the seafood over the cheese. If the sauce is thin, drain as much liquid as possible before putting it on the bread.

Carefully fold the dough in half lengthways over the filling to make the edges meet. Seal the edges with the tines of a fork. Make four diagonal slits in the top of each loaf to create vents. Brush the top of each loaf with egg. Mix the parmesan cheese and black pepper in a small bowl and sprinkle it on top of each loaf. Bake at 325 degrees for 20 minutes or until golden brown. Serves eight.

Janelle says that this versatile dish can be made with almost any fish, including catfish, redfish, speckled trout and especially crappie, which her husband Clyde specializes in.

“Clyde’s aunt, Gloria Cortez, made a fish loaf,” she said. “My first response was, ‘Ugh — a fish loaf!’ But I thought it had potential. I tinkered with it and made mini-loaves that won a blue ribbon at the Des Allemands Catfish Festival.

“From there, I went to tarts. They were prettier and easy to serve. This was a recipe I used in my catering/personal chef business, Tasteful Creations.”

Add salt and seafood boil to a pot of water to taste and heat until it boils. Reduce the heat to medium and add the fillets. When the fish flesh turns white, and can be flaked with a fork, remove the fillets from the water and place them in a strainer to thoroughly drain. Move the fillets to a large bowl. Add the onion, bell pepper, parsley, eggs, 2 cups bread crumbs, Creole seasoning and hot sauce to taste. Mix well using your hands. Squeeze a handful of mixture to make a ball. If it is too moist, add bread crumbs. If it is too dry, add another egg. Divide the mixture into eight equal parts and put into tart pans that have been sprayed with non-stick cooking spray. Press the mix into the tart pan and then depress the edge of the mixture near the rim of each tart pan to make a lower edge where the butter can pool, helping crisp the tart. Mix the ketchup and hot sauce to taste in a small bowl. The mixture should be spicy. Add lemon juice and mix well. Spoon a dollop of the sauce on the top of each tart and spread it to cover the center. Line a cookie sheet with foil and place the tarts on it. Bake at 350 degrees for 20 minutes. After baking, cut the butter into eight equal pats and place a pat on the center of each tart. Lightly sprinkle the remaining bread crumbs over the top of each tart. Put them back in the oven and bake until the butter melts and the bread crumbs are lightly browned. Serves eight.