Derek Logan has a lot of loves.

“I love being a game warden. I love law enforcement,” Logan said. “I always have. I love to catch big catfish. I love to eat, and I like to entertain — cooking and hanging out.

“Of all the friends we have, none invites us into their house to eat; they all invite themselves to our house.”

Logan belongs to a closely knit family, one for whom food is important. His maternal grandmother, Melba LeBouef Frederick, owned and operated the Park Restaurant in downtown Abbeville for 33 years.

The restaurant was famous for, among other things, its hamburgers. It was voted to have the best hamburger in town every year that it was open. The restaurant has been in its new owners’ hands for 12 years, but it still serves awesome homemade hamburgers.

Logan recalled that his grandmother as always working.

“She had candy bars behind the counter. I loved Snickers,” he said. “I would ask her, ‘Maw Maw, can I bring one to my man Harry (Grandfather Logan)?’

“He never saw them.”

Ms. Melba, who was listening in on this conversation, feigned indignation, but her twinkling eyes gave her away.

“Now he says that he told me little white lies,” she said.

“She cooked for them every day, and she raised me after my mother died, from when I was 3 until I was 9,” Logan explained. “She made the best fried chicken you could ever put in your mouth.

“Whatever I wanted, she would cook. She would sit on a tall chair by the stove and stir. The more you stir, the better it is. My saying is, ‘If you’re not making noise, you’re not cooking.’

Cooking is a family affair

The ability to prepare great food stepped down.

“Dad is a very good cook, too,” Logan said. “To this day, I’ve never eaten a beef or pork roast as good as his. He makes his own vegetable stuffing.

“And he makes the best duck gumbo in the world. (the younger Logan’s wife) Rebecca will do anything for it. I learned the most about cooking from him.”

Logan is definitely the family pet, noting his Aunt Vickie Frederick offered to buy everything he needs for cooking before she dies.

He ticks off some of her largesse: Cajun microwave, a fleet of black iron pots, a custom boiling rig, a custom aluminum gumbo pot, and so forth.

“With the equipment she bought for me, her name will live on with me,” he said unselfconsciously.

Derek invited his uncle and aunt, Glynn and Debra Frederick, to share with Rebecca and Maw Maw Melba the two recipes that follow below. Like with any Cajun family eating together, the chatter flies.

Guess what they are talking about?

Each of them talked about what they were going to cook and eat next week, culminating in the Sunday family grand finale.

They hadn’t finished this meal yet, and they were not just planning the next meal but the next week’s meals.

“Another game warden, Justin Sonnier, served me some of this dish after work,” says Derek. “I thought it was so good, and decided that I had to try it. I changed it some — more shrimp, more cream of mushroom soup and I added mushrooms. Rebecca loves mushrooms.

“I cook this for 20 people at a time. Everybody wants the recipe. This is one of my favorite things to eat — so rich; so buttery.”

“I like it because it has a sweet accent on top of the spices and seafood,” she said. “It is sweet and peppery at the same time. I like that.” 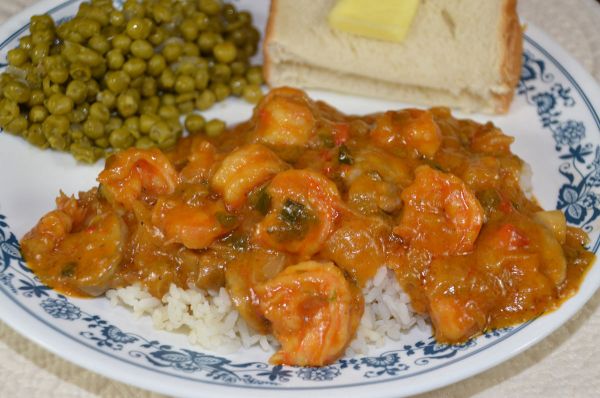 This dish has a lot of onions.

“When Rebecca and I cook, we don’t hold off on the onions,” Derek said. “You should have more onions than anything else.”

Derek refuses to use precut seasonings, calling them “mushy.”

Rebecca added that the dish is easy to freeze, and is wonderful on top of fried fish or baked flounder.

Add butter to a large pot. Stir in the garlic paste. Add ¾ of the chopped onions and all the bell peppers. Sauté on high heat, stirring constantly to keep from burning. When the veggies are soft, add the rest of the onions and the garlic juice. Continue to stir. The later addition of onions creates more “texture” in the sauce. When the veggies and liquid begin to make a frying sound, cook 10 more minutes. Add the cream soups, one can at a time and stir in each as it is added to allow the can’s contents to cook into the other ingredients. Stir until blended. Add water a half-cup at a time to keep the sauce from getting too thick. Season shrimp liberally with Creole seasoning and mix to coat well. Add 1/3 of shrimp to sauce. Stir and cook until the shrimp are pink. Add the tomato sauce, stir and reduce heat to low. Add the rest of the shrimp, the green onions and the mushrooms. Simmer 30 minutes uncovered. If the sauce becomes too thick and threatened to stick, add water. Add more Creole Seasoning, if desired. Serve over rice. Serves 10-12.

No matter how many ways Louisianan’s learn to cook fish, fried is still the favorite. When we were youngsters, coming from two totally different backgrounds, we thought “fried fish” was one word — one part couldn’t be said without the other.

We have changed now, but we still go back to our roots more than we care to admit. Of course, frying has become more sophisticated. Both our mommas pan-fried, her mother using corn meal and mine using white flour.

Derek was on a hunting trip when one of his partners mentioned how he fried venison backstrap with crushed potato chips and cut-up croutons. That set him thinking.

“I wondered if I could fry fish with instant mashed potatoes,” he wondered. “One night, about 3 years ago, I did it. We cooked it for ourselves. Now we cook it for guests.”

Add flour, instant potatoes and 2 tbsp Creole seasoning to a gallon zipper-type plastic bag. Shake to mix well. If the catfish are large, as Derek’s often are, slice them across the grain in pieces ½-inch thick. In a separate plastic bag, put the fish, 2 tbsp Creole seasoning and mustard. Work the bag well to spread the seasoning over all parts of the fish and place the bag in a freezer for 15 minutes. While the fish are chilling, heat the vegetable oil in a deep fryer to 375 degrees Fahrenheit. After taking the fish bag from the freezer, remove fish from the seasoning bag a few pieces at a time and drop them into the flour-potato bag. Shake well to coat the pieces and add them to the hot oil. Fry until golden brown. Serves 6-8.

Another black eye for the pogie industry off the Louisiana coast — an abandoned net full of dead fish was left just off Holly Beach. […]

Hunting a dust trail, the little Blue House and lots of squirrel mulligan

Kinny Haddox recalls some hunting adventures he had with his friend Byron Rogers deep in the Caldwell Parish woods. […]