Not everyone has the luxury of decades of experience in locating intricate and productive incongruities along the bottom.

Even searching for them on depth finders can seem like searching for a needle in a haystack, not to mention the best time to do so is when the water is calm and the fishing is optimal.

Harold Renfroe, a retired school teacher who fishes the rock jetty sections on both sides of Grand Isle and the beach between Elmer’s Island and Belle Pass, doesn’t even have a depth finder on his boat, an old V hull designed long ago for walleye fishing in deep, choppy water.

No GPS? No problem!

He also doesn’t have a trolling motor or GPS onboard.

Instead, he relies on a razor-sharp memory — sometimes with the help of a camera — a lot of tackle, a specially rigged golf umbrella and a roll of toilet paper in finding the hidden treasures located beneath the brine.

“It’s an old-school way of doing things,” Renfroe said. “My father and grandfather used to fish in the bay, and they would triangulate spots. My way is a little different, but it hasn’t failed me yet.

“I wouldn’t say I catch more than most good fishermen out there, but I can hang with a lot of them.”

No sounder, no GPS and no trolling motor means lots of casting to find spots on the rocks that, while they might not end up being end-all speckled trout and redfish holes, is a little different than the typical stretch.

Cheap 1/2-ounce jigheads begin the process, and a sturdy anchor ends it.

“I make long casts about 10 feet off of a stretch of rocks and gradually work my way out,” he explains. “I try to make every cast as far as I can to cover as much ground as possible but also to make them really close to the same distance.

“If there’s a hole in your pattern by just 10 or so feet, that might be two or three rocks in a pile you miss. That really can be a good spot.”

Renfroe uses spinning tackle exclusively to avoid backlashes. Because he’s actually looking to hang up the jig, he uses 8-pound mono for maximum casting distance and so it will easily break off when he’s satisfied he’s located a pile of submerged rocks just off the jetty he’s working.

And that’s when things get interesting.

“I’ll go ahead and motor up to (the spot) a safe distance, take a wad of wet toilet paper and throw it up on the (visible) rocks (near the submerged hotspot). I’m trying to get one that land flush on a good rock so that I can see it. Then I’ll take a picture of it,” said Renfroe.

Renfroe said people would be surprised how long a well-formed and well placed handful of TP will last.

“If it sticks in the morning and you have a nice, hot day with no storms, it’ll dry out and stay there for a season,” he said. “Eventually it’ll go away, but by then I usually have it burned in my memory. And if it doesn’t (stay lodged in his mind), I’ve got a picture of it.”

Another approach — what Renfroe admits is extremely tedious — is a systematic way of finding good water where fish will be holding perhaps just for that day or that half hour.

But he believes there’s something to a spot where a concentration of fish is found that can be used in the future.

“I guess there could just be random spots where a school of fish is passing through and just happens to run into a school of bait, but I believe most all of the time there’s something on the bottom that’s causing those fish to hold there,” Renfroe said. “It’s just something different about the bottom structure than those rocks just uniformly sloping down.”

Renfroe anchors his boat as close as he feels safe to a jetty and works his offering down the line of rocks in both direction.

His choice is a shallow, sliding-cork rig with either a live croaker or live pogie. The goal is to get it as close to the bottom as possible without fouling on the rocky bottom. 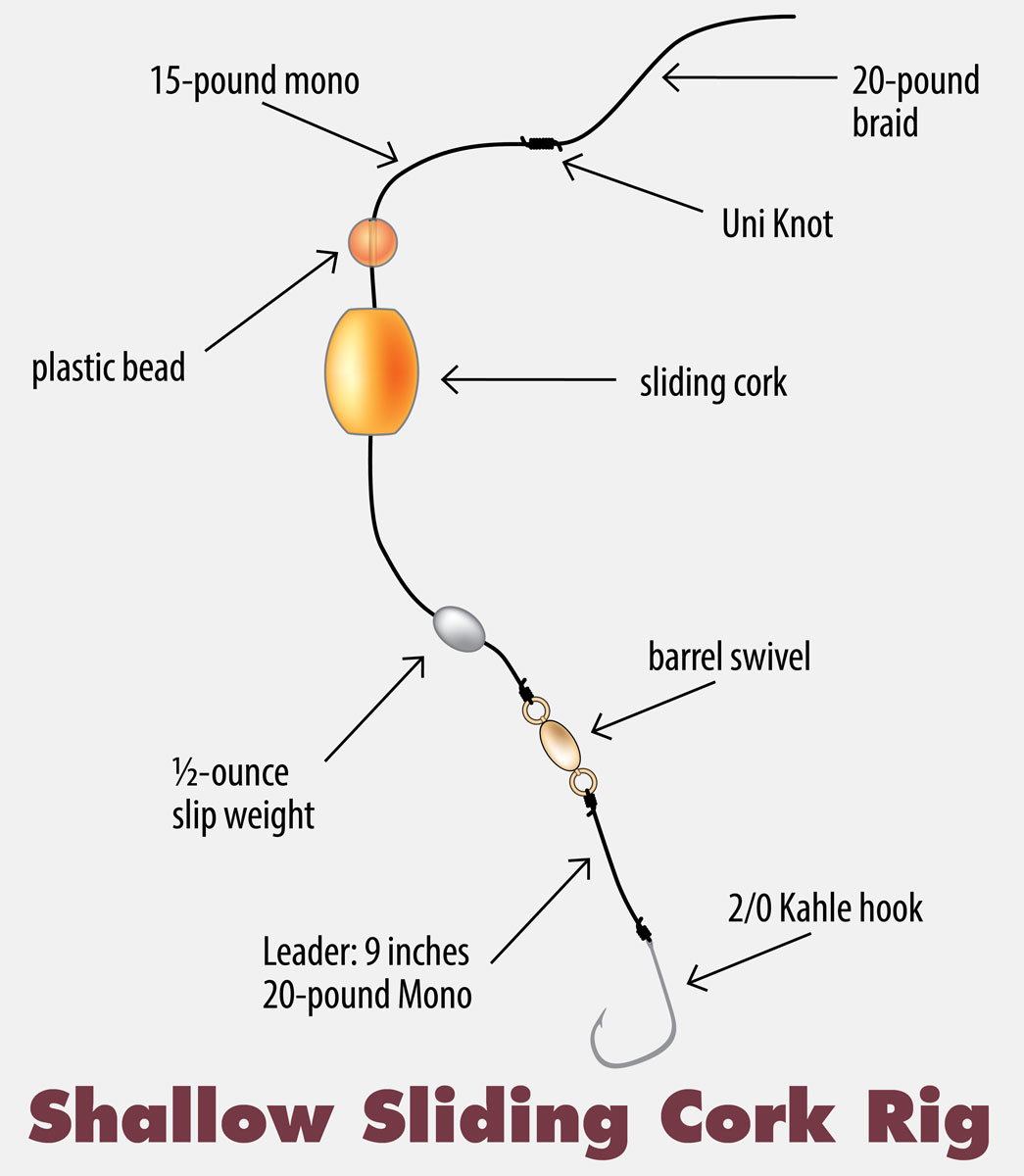 Of course, doing that takes a systematic approach of long, accurate casts and a lot of experimentation with the depth at the live bait is presented.

And experimentation causes a lot of lost tackle.

“Especially with croakers, if you give them a chance to swim into those rocks, they’re going to do it,” Renfroe said. “And that’s going to very quickly be a lost bait. It’s a method I’m at peace with, but, yeah, there’s a lot of retying.”

The angler said he fishes mostly by himself with eight identical rods rigged and ready to go.

“You’ve got to have the same rod, same reel, same line, same leader, same hook, basically the same-size bait,” Renfroe said. “If anything is different you’re not going to get the same presentation, which can throw off the whole reason you’re doing it.”

His rod and reel of choice is a Shimano 2500 series loaded with 6-pound PowerPro braided line and a medium/light-action spinning rod.

The light line is important because it provides “good overall strength and you can chunk it a long way,” Renfroe said. “It also breaks off fairly easy.”

A 1/2-ounce weight is a little lighter than most, he said, but he’s dealing with much shallower water than most sliding-cork users.

Renfroe said his rig is simply the best choice for the application.

“The reason for the sliding cork is simple: It allows me reel all the way up to really get max distance and max accuracy out of my casts, which is what I need to cover as much area as possible,” he said. “I want to be able to — when the wind is right (blowing perpendicular to the rocks) — to be able to throw the same distance to the right or left of the stern of my boat.

“That’s how you have to do it. It’s not a real efficient way to fish, but that’s a way to maximize it as much as possible.”

Finally, Renfroe said he counts the time the bait is in the water to give a hungry trout or red just enough time to find it and attack it.

“Thirty seconds is plenty of time in an area for a fish to zero in on a bait in the strike zone I’m looking for, which is right above the rocks most of the time,” he said. “After that time has elapsed, I reel it in gently about 20 feet. And then it’s another 30 seconds and so on.

“And then I’ll cast out another 20 feet farther out three or four more times. Like I said, it’s not for everyone, but you’ll be sure of the water you’re fishing when you’ve done it.”

Trophy trout rocks are a gamechanger

Captain Lloyd Landry told a story of one of his favorite spots in the entire Buras/Empire system, a place where a once-in-a-lifetime speckled trout is almost always a possibility, no matter how nasty the spring/summer weather is or how dirty the water.

“I had a guy not too long ago who wanted to catch a big trout and said he would do what it takes to do it,” he said. “The wind was blowing off the Gulf, the water was dirty, but I told him there’s one spot where I thought he could do it.”

Landry was referring to a large, flat rock located just off the main line of the jetty in about 2 feet of water on the edge of a tangle of smaller rocks and rebar.

“I’ve probably caught 15 trout (weighing) 6 pounds or better off of it,” he said. “And I’ve done it even in the worst conditions, if guys are willing to put in the work. That man sat there, and I told him to cast in the same spot over and over again until I said it was enough.

The angler kept at it, even though the fish weren’t the size for which he was looking.

“Then he finally got what he wanted after an hour,” Landry said. “That fish weighed 6 pounds, 8 ounces.”

“What happens is, those fish just wait there for some bait to get washed over that rock, where they’re disoriented,” Lloyd said. “They’ll slip up on top (of the rock) real quick for an easy meal and just ease back into position.”

Which jighead is best for speckled trout fishing? It all depends

One of the most-versatile and effective ways to catch speckled trout is with a soft plastic and jighead pairing. You can target fish both shallow and deep.  […]

Join Capt. Brandon Carter with Reel Shot Guide Service as he works on a limit of speckled trout before 8:00 a.m. in Venice. […]