If you are having trouble getting on redfish, just look for schools of mullet. It’s as close to a guarantee to hot action as you’ll get — if you understand the keys to success.

Everyone loves a parade, especially when it doubles as the buffet line. And that’s the deal with the major mullet movement that happens each fall-winter — it’s an all-out whack fest that’s as close to guaranteed fishing action as you’ll find.

Reproduction is the primary motivation and prespawn aggregations can be significant. The best part is that this parade’s duration — which roughly runs from October through March — offers multiple opportunities for redfish.

“The mullet seem to go out in spurts,” said Cajun Fishing Adventures’ Capt. Cody Obiol. “Some will go out, spawn, come back in and then another batch will go out. You’ll see the big schools popping up; then you’ll go a day or two when you don’t see them; and then all of a sudden they’re all back again.

“You can almost follow them — that’s how we focus on bull reds in the fall. It’s like clock work: When the mullet go offshore, the bull reds follow them until they get to a certain point, and then they get the next batch of mullet.”

Why are mullet so important?

“Mullet are the basis of the food chain,” said Capt. Billy Walbaum of Paradise Plus Guide Service. “When we go into an area, if we don’t see mullet we’re usually not there long. If you find the mullet, you’ll find the redfish.

One of the key determinants, Walbaum said, is the Mississippi River level.

Mullet are strong, so they’re not pushed around by tides and wind, he said. They go where they want to go and, since they can find algae to eat just about anywhere, the one thing they look for is comfortable water temperature.

So daily river monitoring is a way of life for Delta anglers, as cold or muddy water can push the baitfish to the outer edges of coastal bays.

As Obiol noted, the reds’ relationship with mullet can be direct or indirect.

“I’ve found that, even if the redfish aren’t eating the mullet, it’s almost like they use the mullet for camouflage,” he said. “They’ll get underneath the schools and swim with the mullet and eat whatever (forage) they find.”

Bull redss will snack on any mullet they can get their jaws around, but those rumbling schools also displace a lot of crabs and other forage fish that reds and trout can’t resist.

And Walbaum said the fall’s inshore abundance of pogie schools only sweetens this deal.

Obiol prefers green water, as this is the algae-rich brine where mullet find ample food.

Feeding’s never a bad thing, but this time of year, they’re also thinking about those offshore moves. Obiol said he expects to find fall mullet holding in the outside bays from Buras to Venice, including the mouths of the big passes.

These are what he calls transitional areas where reds and other predators can intercept mullet coming and going on their migration routes.

Leaping, splashing and waking across the surface, mullet schools aren’t hard to spot. But let the bull reds, whopper jacks or sharks make a run through the meat ball, and dozens of mullet erupting from a white water fury bespeaks unmistakable predation.

Less dramatic yet every bit as indicative is the aerial assault Obiol said.

“If a pelican is diving, you can bet it’s mullet,” he explained. “That’s the pelican’s main food, so that’s where you‘ll find the bull reds.”

Without question, the most exciting — and some might say the most productive — way to target redfish and other predators in mullet schools is with topwaters.

Favoring LiveTarget Mullets, Obiol said this presentation not only fits the profile predators are used to seeing, but it also has a way of clearing the stage for big bites.

“All mullet are sitting on the surface, and those redfish are looking for that one mullet that’s wounded — and topwater baits are awesome for that,” Obiol said. “Work it fast and aggressively to make it splash a lot. When you pull that bait through a school of mullet, and all those mullet disperse and the only one left is your bait jerking back and forth, that redfish is going to come after it.”

He said it takes aggressive action to attract those big reds.

“There’s so much (food) in the area, you really want them to notice your bait,” Obiol said. “It’s like the weakest doesn’t survive.

“You’re making the fish see your bait because all the other ones left.”

“I’m popping it a lot. You want it to move and draw that attention,” Obiol said of his popping-cork technique. “You don’t want to let it sit too long because that’s when you start getting your gafftop and the fish you don’t want.

“The faster you move it, the more likely you’re going to get the redfish to chase it.”

Walbaum said the good thing about the fall mullet movement is its forgiving nature: Mullet are driven by seasonal spawning focus, while the predators in tow are following their appetites.

Both points make this a less demanding scenario than sight-casting to lone redfish in shallow marsh ponds.

That being said, Obiol stressed the wisdom of a prudent approach. For him, it’s less about stealth and more about time management.

“You watch the mullet to see which way they’re swimming, and I always like to get in front of them and let them come to me,” he said. “You want to stay in front of them where you can cast back to them.

“If you try to chase that school, you’re never going to keep up. When you find a school of mullet coming down the bank or across a bay, all of them are going to take that same path. So, you let a school come through, you catch what you can and as it leaves you don’t chase it.

“You just wait for that next push that comes to you.”

How to catch offshore fish with mullet

Although inshore guide Capt. Cody Obiol prefers engaging mullet from their schools’ perimeters, he has on occasion put a few live ones into service when calm seas allow a nearshore tuna run.

“You just hook a live mullet through the lips with a circle hook, let him swim around on top and the tuna just tear wear him out,” Obiol said.

Culling shrimpers offer another option. Separating tuna from their sensory magnets is tough, but diligent use of fresh mullet can work wonders. 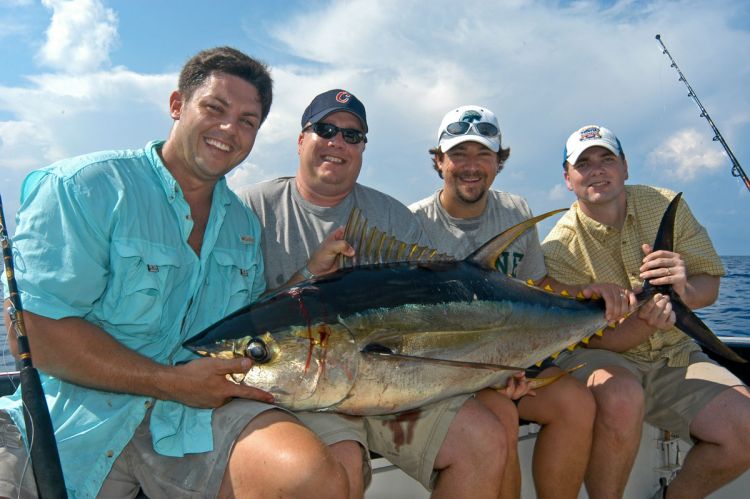 “You cut the mullet up for chum, and then you put a chunk on your hook and let it fall into the chum line, and they’ll come up and eat it,” he said. “You’re just trying to pull those tuna off the back of that trawl boat.

“You keep your chum line going and they’ll stay there with you.

Simply chunking mullet down the backbone works, but you’ll get more use per fish with this chunking technique:

Capt. Wade Wells of the Mexican Gulf Fishing Company cast-nets mullet of various sizes inside the passes and hauls them offshore for various uses.

He’ll rig finger mullet on 6/0 to 8/0 Mustad Demon circle hooks (39950NP-BN) for snapper, while larger mullet make dandy swordfish baits when fished on 9/0 to 10/0 Mustad 7691DT knife-edge hooks with hefty weights along the edge of the shelf.

Elsewhere, the mullet run does not go unnoticed by some of the Gulf’s most vicious predators.

“When the mullet go offshore to spawn, the king mackerel and wahoo get after them as soon as they start their journey out of the passes and bays,” Southern Kingfish Association Hall of Famer Marcus Kennedy said. “There are several salt domes offshore in 200 to 400 feet (of water) where the mullet and pogies congregate to spawn from November through March.

“During this time, every king and wahoo in the Northern Gulf will either be with the mullet and pogy schools in open water or congregated with them on the salt domes.”

Slow-trolling live mullet on stout wire stinger rigs or dropping them deep on downriggers is a good bet for tempting big, toothy predators.

On blustery days, pop out a kite and hang a live, bridled mullet just below the surface, where frantic splashing will bring hungry tyrants charging forth with bad intentions.0rp

The Delta Lures Redfish Spinnerbait has been the downfall of beaucoup redfish since Fred King and Roy LaBorde introduced it in the mid-2010s. […]