If you love seeing redfish smash topwater offerings, but aren’t that familiar with the waters around Grand Isle, now is the time to head down Highway 1 and make a trip anyway.

Because according to local angler Tommy Vidrine, just about anywhere you go in the area where your bait actually hits the water, you’re bound to be in for some drag-screaming bull redfish action.

“A lot of people like to catch reds, and I’ve never seen that many in my lifetime at Grand Isle,” said Vidrine, who’s fished out of Fourchon for about 30 years and Grand Isle for the last 10. “Trout fishing from the jetties to the beach, to the rigs out of Fourchon, to almost any one of those beaches back to the marsh — everywhere I’ve gone I’ve latched on to some bulls.

Vidrine captured some enormous  schools on video feeding on shrimp on October 28 and 30.

“If somebody wants to catch redfish, and they don’t know where to go, it’s pretty easy. If it’s calm, or you have a 5 to 10 mile per hour wind, you can fish almost anywhere. 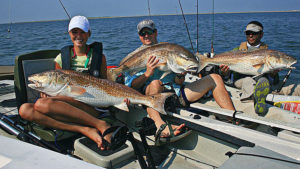 If the fish aren’t visibly swimming on top, “Put a croaker on and fish on the bottom with a Carolina rig. Just get some good line, because there’s a lot of 30-pounders plus.”

Nice-sized croakers are plentiful at Bridge Side Marina, and Vidrine said the weight of a Carolina rig makes it easier to cast.  He recommended 30- to 40-pound mono line with a stiff rod, and said the bulk of the action takes place early.

“On the beach in the surf where the waves are breaking, cast right on the backside of the wave where it’s breaking and the water washes back down,” he said. “That’s the best spot until around 9 or 10.

“When that sun comes up, they’re like a bunch of wolves hunting at sunset — but they hunt at daybreak instead. They’re just looking for that bait.”

Gorilla Village, a sand bar to the right out of Caminada Pass, is another location where reds are plentiful, he said.

“That thing is full of them almost every time I pass there,” Vidrine said. “I kind of slow my boat down, and many times I’ve seen at least three- or four-hundred in a school. I could have just pitched out on top of them.”

When they’re in a full-on feeding frenzy like Vidrine has seen recently, he said it really doesn’t matter what you throw: croaker, shrimp, plastics or topwater lures. Just cast out, and hold on tight.

A few weeks ago, Marsh Man Masson saw underwater footage of the Fishlab Flutter Nymph, and thought it would be a really special lure. […]

Shoreline specks under the Matrix Float

Chas Champagne set on out a cloudy fall day in search of shallow water speckled trout along the shorelines of Lake Pontchartrain. […]

Fishing over the grass beds

Chas Champagne uses different techniques and products from Matrix Shad to catch speckled trout and bass over the grass beds. […]