It’s all too easy to think of freshwater catfish as sluggish creatures, plunked down on the bottom waiting for food or opportunity to drift by. And some catfish are indeed homebodies. A flathead catfish may grow to 100 pounds and never travel more than a few hundred yards once it has settled in and claimed a sunken stump, log or treetop.

But graceful and slender channel catfish are the athletic travel bugs of the family. Commercial fishermen have long maintained that when rivers go into flood stage, channel cats leave the river bed and move into the formerly dry lands that have been flooded by the river.

Mississippi State University biologists did a study on a 21-mile stretch of the Yockanookany River, a tributary of the Pearl, to see just how channel cats responded to river flood conditions.

The lower stretch on the river had no levees to prevent flood waters from moving into nearby floodplain swamps. The upper section had levees that prevented such flooding.

They caught 40 channel catfish with hoop nets, surgically implanted radio transmitters in them and released them where they were captured. Twelve were in the leveed section, 20 were from the un-leveed section, and eight were from a back-swamp lake formed from an old river channel. The lake was connected with the river during flood periods.

The fish were tracked from March to June one year, November to June the next year, and whenever other short-term overbank floods occurred. During low-water periods, all of the radio tagged fish were in the Yockanookany River channel and tended to move less than a half-mile.

The researchers concluded that the fish moved into the flood plains and swamps for feeding opportunities, especially for crawfish. They were most surprised by the willingness of the fish to move downstream.

Other studies also show a lot of movement. Reservoir and river populations of channel catfish show a general trend to move upstream in the spring, followed by downstream movement in the fall.

How far do they go?

Channel catfish may move considerable distances. One in the Missouri River traveled 281 miles upstream in 72 days, averaging nearly 4 miles a day. Another in the St. John’s River in Florida traveled 65 miles in 22 days, also upstream.

Channel catfish live in a wide range of habitats, seeming to prefer warm waters in the range of 82 to 86º F. Long exposure to water temperatures of 98 to 100º F can kill them, although they will feed actively in waters up to 94º F.

Although they are freshwater fish, they are often found in low-salinity brackish water and occasionally even saltier water. I have caught them within sight of Grand Isle in nearly full-strength Gulf of Mexico water. 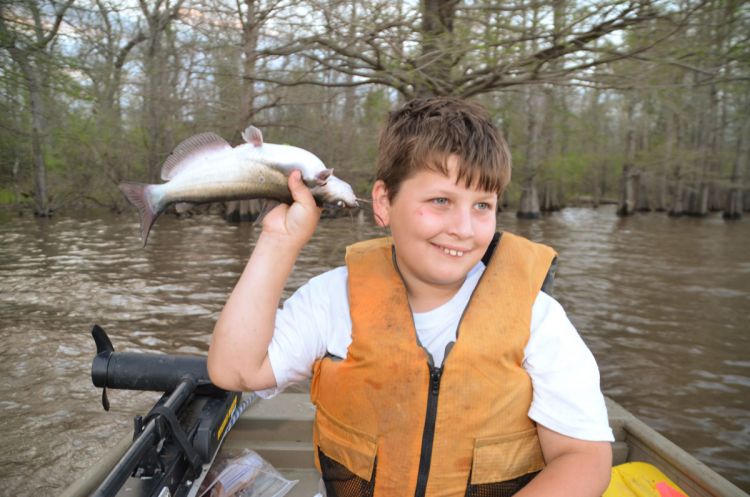 Normally channel cats live six to 10 years, although longer life spans have been reported, typically from the northern part of their range: A 40-year-old fish was reported in Canada.

Channel catfish love to eat, and have been called “swimming tongues” with good reason. The entire surface of their body is covered in taste buds. The buds are especially concentrated on their barbels (whiskers), where an incredible 16,000 taste buds per square inch are found.

The fishes’ exceptional senses allow them to easily locate food in dark, stained, or muddy water. They also possess what is called a Weberian apparatus, which amplifies sound waves that other fish cannot hear.

They eat virtually anything digestible. Water-living insects and insect larvae are a big part of their diet. They also eat shrimp, crawfish, crustacean isopods, stringy algae and detritus (pieces and parts of dead plants and animals).

As the catfish grow, they prey more heavily on fish. Almost any species of fish is likely to be found in their stomachs.

Their wiliness to eat anything was one of the keys to developing a vigorous aquaculture industry around them. On fish farms, they are fed prepared pellets made of plant proteins, such as soybean meal, cottonseed meal, corn meal, peanut meal and wheat, supplemented with vegetable oil, vitamins, and minerals. No animal protein like fish meal is used.

This diet comes at a cost though.

Fish that eat wild, natural diets concentrate heart-healthy oils called omega-3s that fend off heart disease in humans. Domestic animals such as cattle, sheep and pigs on the other hand, have omega-6 oils in their bodies. Diets high in these oils have been implicated in human heart disease.

Research done at LSU showed farm-raised catfish have an oil profile heavily skewed toward omega-6s rather than heart-healthy omega-3s. This is simply due to their diet, which more closely resembles that of farm animals than fish.

But they all taste good — farmed or wild.

James Nelson Gowanloch, the famed chief biologist of the Louisiana Department of Wild Life (yes, the spelling is correct) and Fisheries in the 1930s and 1940s, put it best in a Louisiana Conservationist article.

“Many, including the writer, regard well-prepared catfish as a dish fit for any intelligent and experienced epicure.”