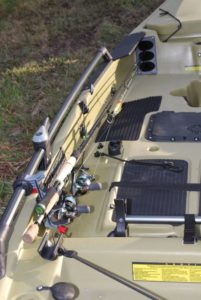 Sure, sure, it’s old news that kayaks are a deadly effective tool for slipping up quietly on redfish grazing for lunch is marsh ponds only a foot deep.

But speckled trout is a whole ’nother game.

Unlike their shoreline-hugging, homebody cousins, trout roam open waters like packs of wolves searching for victims.

Even in winter, when speckled trout retreat to interior marshes, they still prefer more-open water than do redfish.

So being able to move long distances comfortably and fish wind-affected waters are important factors when fishing speckled trout from a kayak.

John Williams, kayak guru and owner of Lafayette’s Pack & Paddle outfitters, said there are a number of things a fisherman will want in his trout kayak: 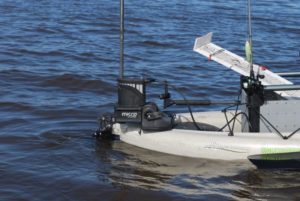 Advantages of pedal kayaks are as follows:

3) External storage for rods is important. Speckled trout fishing demands the use of more lures, so an angler should have several rods rigged. A trout kayak should also have space for tackle boxes for the same reasons.

4) Longer kayaks are better for trout fishing because much of it is done in open water and longer boats are drier. A minimum of 12 feet is recommended, and anglers weighing more than 225 pounds would probably benefit from a 14-foot kayak.

5) Installing a good anchoring system is very important. The angler needs to nail the boat in a spot when he gets a bite to thoroughly work the school. It is easy to lose track of a spot if the boat drifts while a fish is being fought.

6) If a fisherman plans to use a lot of live bait, he should consider buying a kayak livewell made by Hobie (the only maker). It has a powered circulating system. The Live Well XL also has a recirculating feature.

7) Because trout kayakers fish open water used by power boats, they need to be visible early and late in the day. Williams recommends a 360-degree light. The most popular one sold is the VISIpole.

The Duck Camp Dinner crew heads west to the cajun prairies of Louisiana where specklebelly geese are king of the sky. […]