It’s a doggone good time if you’re willing to put in the work.

Many hunters got their start chasing squirrels through Louisiana’s oak bottoms. The thought of squirrel hunting takes hunters back to their youth, sitting on the ground, scrutinizing every leaf movement and hoping it would materialize into the flicker of a bushytail. That’s an early “thrill of the hunt” moment.

That initial hunting exposure was often the springboard into what now-seasoned hunters would consider a more complex hunting challenge, like the pursuit of whitetail deer or waterfowl. But if you are years removed from your last squirrel hunt, you might be surprised to learn that chasing bushytails ain’t just for the kids. Running dogs for squirrels is work, but it’s still one heck of an exciting hunt.

Michael Park has spent his formative and adult years hunting the upper and lower oak bottoms of the Pearl River around Slidell. In addition to his hunting hobby, Park spent his youth on his grandfather’s farm in upper St. Tammany.

“My grandfather had over 100 head of cattle for about 20 years when I was growing up,” he said.

Working with ranching dogs eventually developed into training and competing with Border Collies. Park’s efforts earned him a spot in the National Cattle Dog Finals in 2015 and again in 2016. As competition for time limited his hobbies, it eventually pushed Park into training and running squirrel dogs. He started with his first dog, “Satchmo,” a registered Treeing Feist.

“When I bought the dog, the breeder said he named him because of his ‘million-dollar mouth’ and the breeder was right on,” Park said laughing.

Satchmo was a “started dog,” which generally means a younger dog who’s completed fundamental training like obedience and retrieving, but is still working predominately off its natural drive to hunt rather than following specific hunting commands. Although Satchmo had barking down to a science, Park had to work on stretching Satchmo out. He worked to push the dog to hunt at 150, 200 or more yards out away, instead of just hunting the immediate area within sight.

Branch is Park’s other dog. Branch is an original Mountain Cur bought as a puppy in 2020. Michael started Branch off with one toy — a squirrel tail. He would let the dog smell it and play with it, then hang the tail just off the ground from a nearby tree. He’d send Branch out to try and find the tail. Gradually, he would raise the height of the tail off the ground and increase the starting distance between Branch and the squirrel tail.

“You don’t want to teach them to keep their nose down,” he said. “They can start on the ground but need to learn to get that nose up in the air to catch the wind of a squirrel.”

Seasoned dogs typically catch a scent on the ground. But then work back and forth with their nose in the air to figure out which tree the squirrel went up. The dog’s initial bark is a chirp like “locator” bark, indicating just a hint of scent. Once the dog settles on a tree, they let loose (and Satchmo was a pro at that).

“Satchmo’s been pack hunted his whole life and the minute he hears another dog tree or a gun go off, he comes running to pot-lick,” Park said. “Ideally, it’s better to train a dog by himself and when I’m training, I hunt Branch without Satchmo.” 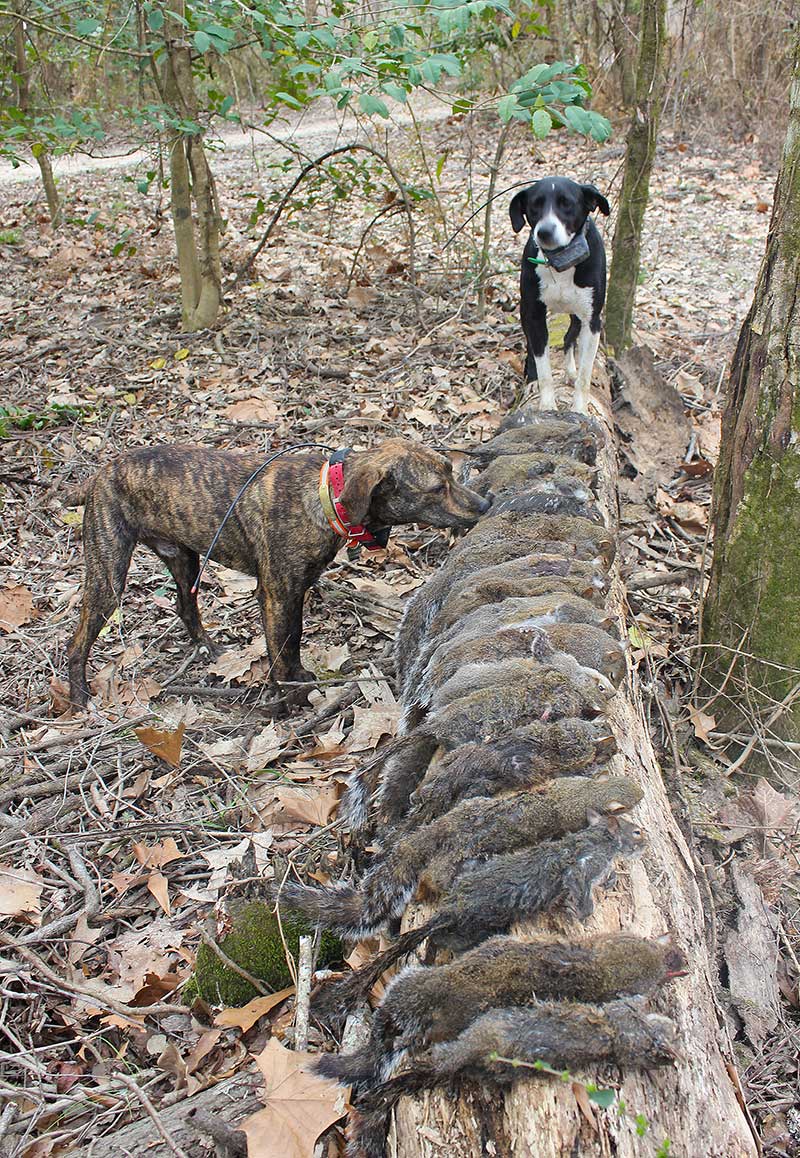 The Cur breeds (“Feist” is the German word for “Cur”) are a multiple purpose dog breed. Both the Cur and the Feist have some amount of hound in their lineage, but the breeds work and hunt in slightly different ways. Among squirrel dogs it’s the classic Ford or Chevy debate; it comes down to preference. That’s why Michael chooses to hunt with both dogs at a time.

In contrast to solitary still hunting, which generally means sitting quietly and patiently waiting, dog hunting is the complete opposite experience. Dog hunts are fast paced and put miles on your feet. It’s a loud hunt because hunters are continually chasing the echoing barks in the swamp. It’s a group hunt and generally the more, the better. It takes several to surround a big oak and sometimes four to five hunters still aren’t enough to bag a fleeing squirrel. Park typically hunts with three regular buddies who also share a camp with boat access only on the upper Pearl River system.

As soon as the group unloads, the dogs start immediately with noses to the ground and begin pushing out in advance of the hunters. The entire morning the dogs are doing “out and backs” — running out of sight of the hunters and then working their way back to rendezvous as hunters walk toward the sounds of barking.

“I’d say we usually do about 10 to 13 miles for the dogs and seven to eight for us,” Michael said while checking the GPS receiver. “They’re just under 100 yards now.”

Satchmo began to sound off, then Branch followed.

“Oh, they on’m,” Phil Maguire, one of Park’s regulars confirms. “That much barking. They on’m.”

And with that, the group picks up the pace to get to the treed squirrel.

Squirrels aren’t different than most game, with regular morning and afternoon movement. Park explained that action tends to be more consistent throughout the morning. As the sun is rising, the squirrel’s movement seems to be spread out until things start shutting down, usually around 9:30 or 10:00. Afternoon hunts, on the other hand, can start slow and then get exciting in that last hour of daylight; and when the sun goes down the action heats up.

Finding them is half the battle

It is truly remarkable how the dogs can work out which tree the squirrel is actually in. Both dogs circle, they bob and weave, they run out and come back. All the while they are letting out little barks as they catch whiffles of our quarry. There are no real discernible pattern to the dog’s movement, but the squirrels are quick to recognize the risk and immediately hunker down and hide.

“Watch,” Park said, nodding at Satchmo. “He’s winding something. He starts hoping like an antelope, trying to get his nose up in the air. He’s trying to wind.”

Park then does some confidence coaching, “Where’s it at? Where’s he at? Get’m! Get’m boy!” Satchmo locks onto a tree, again followed by Branch.

And for the record, the dogs are better than the hunters.

When you’re on a treed squirrel, nine out of 10 times the squirrel has to move for the hunters to find it. These little guys are ghosts in the canopy. Shaking branches, through sticks, even walking closely around the tree trunk can elicit a movement needed to find a hiding squirrel. And once you see them it really comes down to the shooting. They can instantly duck into a hole or nest.

After walking what felt like miles between treed squirrels, suddenly both dogs were barking on separate trees — multiple squirrels. The group quickly bagged the first treed squirrel and moved over to the next. Park began to shake the tangled rat’s nest of vines dangling from the canopy when at the very tip top of this ancient oak, a squirrel’s silhouette appears. Just before the first shot rings out, this squirrel full-on Superman dives out of the top of the tree. In brief amazement, everyone just watches. This grey squirrel does a full extension outstretch trying to make an adjacent tree; nothing between him and the ground but 200 feet of air.

After the squirrel barely makes the next tree, it pulls a “Triple Lindy” Rodney Dangerfield would have been proud of. He literally springs off multiple branches, does one handed Tarzan swings off limbs, all while changing directions like a Plinko game until he ultimately makes it to the ground, seemingly unscathed. Keep in mind, the squirrel’s doing all this while five hunters are taking multiple shots at him from every direction.

When the squirrel hits the forest floor, he takes off like he’s been shot out of a cannon. Dogs tear off, hunters follow suit. Neo (from Hollywood’s The Matrix) has nothing on this squirrel! We can’t keep up and only catch a fleeting glimpse of him back up in the treetops jumping across a small bayou too deep for hunters to cross. Count this one a win for the squirrel.

Running with the dogs is not the squirrel hunting of your youth. If you have access to squirrel dogs, get in shape and get to hunting these tree top acrobats; you won’t be disappointed.

The 35,619 acre Pearl River Wildlife Management Area in St. Tammany Parish is a great place to squirrel hunt. Much of it is hard to reach, but not all of it.

The tract’s Old Highway 11 road located on the North end of the management area northeast of Slidell allows for easy access into the Pearl’s thousands of acres of hardwood bottoms. And it’s open to the public.

It is important to familiar with all rules and regulations of the Pearl WMA, so be sure to review the LDWF’s annual hunting pamphlet. On the WMA, squirrel dogs are only allowed toward the squirrel season. Also, if you are using squirrel dogs, hunters’ orange or other blaze color is required. It’s a great time to hunt because there is a liberal bag limit. So go with several hunters and you’ll fill up a black pot quickly!