When I’m deer hunting in woods that are crawling with fox squirrels, I’m always on the lookout to see a flash of black. Every year I take several normal red and grey squirrels with my bows when easy shots present themselves near the ground. However, along the Mississippi River and surrounding bottomland hardwoods some of the fox squirrels are black.

These big fox squirrels come in many different shades of grey, silver, brown and jet black which make beautiful mounts and tanned pelts. I have lost quite a few arrows emptying my quiver into the tree tops in pursuit of them. A few shots have connected, and I’ve successfully harvested three black squirrels with my bows.

When I was growing up, squirrels were my favorite animals to hunt. There was an albino squirrel mounted in my camp that was shot long before I was born. Since seeing that albino, I wanted a unique squirrel to mount one day as well.

After transitioning from small game hunting down south to mainly bowhunting the northern parishes along the Mississippi River, I finally started seeing the prettiest jet black squirrels. Not only did I want to get one, but I set forth a goal to accomplish this task with my bow.

After many years and many lost arrows, I finally shot my first ever black squirrel on a 40-yard shot with my old compound out of my tree climber. That squirrel was stationary near the base of a tree. I was so far away I don’t think the squirrel realized I ever launched the arrow. It was just as exciting as downing a deer. 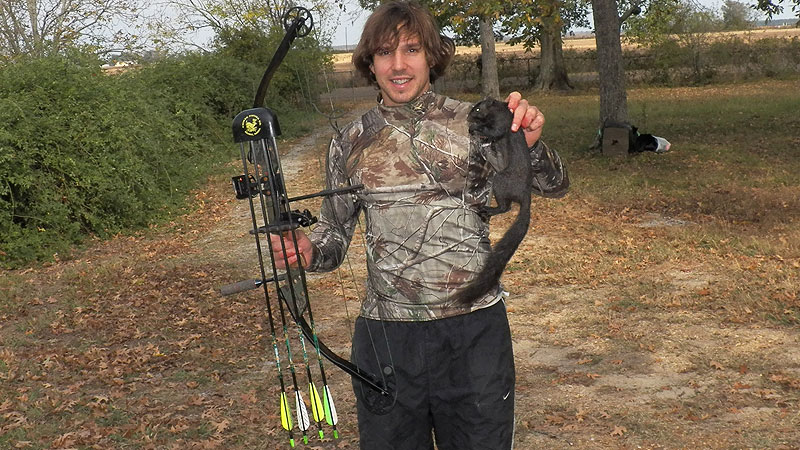 Unfortunately, the taxidermist had lost the hide, so ever since I was determined to get another to mount. In the following years, I had several other misses on these quick black squirrels with my recurves. Once I had nicked some hair off of one, but it got away.

One year I was making a primitive gun hunt and filmed a black squirrel with a white patch on its forehead. I saw the same squirrel again the next day. Archery hunting was closed for those two days, so I just filmed the rare squirrel. Of course, when I went back once archery season reopened, I never saw that white patched squirrel again.

Finally, a few years later I got another opportunity. I went to a small river island with my 13 foot Boston Whaler to scout for deer and made an evening bow stalk. The place had some decent big game sign, but what they had most was clouds of mosquitoes. Then, I found out someone had stolen my game camera I had set that preseason on the island. I was frustrated and itching all over from bug bites.

I still stuck to my game plan of stalking until sunset. The hunt finally turned in my favor when I noticed a quick flash of black darting across the ground.

As I approached the tree, I couldn’t locate where the squirrel went. The light was beginning to fade, and I thought the squirrel had taken off for good. Suddenly, I saw it creeping through thick vines up the tree 15 yards away. I shot my Full Throttle compound and the black squirrel fell from a perfect head shot. After sprinting to go grab the squirrel, I noticed a cottonmouth coiled up just 2 feet away. I was lucky it didn’t strike.

I found my arrow that had a lighted nock around 200 yards away in the fading daylight. That was one long boat ride back slowly navigating through the Mississippi with all the floating logs. I remember how long it took to get the boat back on the trailer in the dark alone with the fast moving current. The lost camera and countless bug bites were forgotten once I had my prized trophy for the wall. 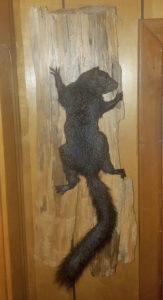 I mounted that squirrel which came out amazing. Squirrels are usually under $100 to mount. Also, I started self-tanning the hides on black squirrels too.

Tanning the hide is what I did with my next black squirrel. The month prior, I had missed a huge jet black squirrel with my 100 pound longbow three times in one hunt. They were all ground shots, and the squirrel kept jumping over the slow arrow. I found my arrows, but one of the Easton FMJ dangerous game arrows got bent.

The next month, I saw another black squirrel that had odd amounts of shine. With the rising sun I couldn’t quite tell if it was black or just a red squirrel. Soon I found out it was one of many colors. I was able to connect with my warbow as it moved through the branches just 12 yards away. The shades of grey, silver, black and red in the animal were mesmerizing.

I never found that arrow, but I did find the launched arrow of the next animal encounter. I had several hogs come through a thicket while stalking. My 900 grain arrow may have been overkill for that squirrel, but that heavy combo helped get a full pass-through on the large hog.

Even all the regular red and grey squirrels taken with my recurves make for fun days when the deer or pigs don’t walk. Since I don’t shoot too many squirrels each season, I really enjoy those few meals knowing I got that meat the hard way.

The problem with archery hunting for squirrels is speed. With my compound bows the squirrels usually don’t have a chance to duck the arrow traveling over 300 feet per second unless they are aware of my presence. With my traditional bows the squirrel has often jumped several feet before the 150 – 190 fps arrow arrives.

I find its best to shoot at a squirrel that is preoccupied searching for food on the ground or in thick branches. A squirrel standing on alert is a miss nearly every time. 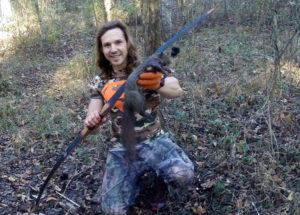 Using a lighted nock can greatly aid in finding an arrow that has sailed through the branches. The arrows will fly another 100-200 yards away. Nowadays, I use reflective arrow wraps. It makes finding an arrow a bit more challenging, but with a strong headlight at night the reflective wrap can be seen sticking up in the ground from over 50 yards away.

I see the majority of my large fox squirrels near wood edges along fields, swamps, bayous and rivers. I have a lot of luck near bitter pecan ridges and honey locust trees. In the middle of deep woods, the majority of squirrels I see are the smaller grey squirrels.

This season try hunting the wood edges along the Mississippi River bottom hardwoods and you may get an opportunity to bag a squirrel worthy of a mount.

The process of bowhunting begins with learning

The process of bowhunting begins with learning all you can about your bow, your arrows, and all the small details that many shooters ignore. […]

Jared Serigné went to the Ducks Unlimited Roadkill Cookoff in New Orleans to try dishes cooked with meat that could be harvested in the wild. […]

Jared Serigné went duck hunting for gadwalls and then Chef Sohail Zandi of Brushland Eating House in Bovina, N.Y., cooked them up. […]