What does the season hold for public- and private-land hunters in the Minden Region who pursue deer, ducks and small-game species this fall and winter?

Jeff Johnson, a veteran LDWF biologist, is well aware of the waterfowl hunting opportunities afforded in the Minden Region. He and his staff play an important role in making the waterfowl habitat as appealing as possible to ducks that make it that far south.

One of the more-popular duck-hunting sites on Bodcau WMA is a greentree reservoir that is approximately 1,600 acres when full, Johnson said.

“We generally try to fill it somewhere in the 50% to 70% full range for the first split, and then gradually increase the water level throughout the waterfowl season,” he reported. “There are also other backwater areas, beaver ponds, etc., on Bodcau that provide some additional opportunity. Being a flood-control area, there can be lots of additional flooded area in years where we have high water earlier in the winter.” 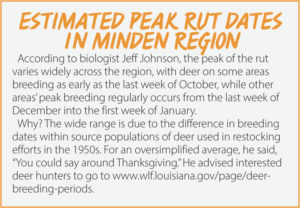 “There is a small, greentree reservoir on Loggy Bayou WMA, as well as a couple of moist-soil impoundments and Swan Lake. Total acreage of waterfowl habitat is substantially less than at Bodcau, but it can provide decent hunting for a few folks,” he said, adding that he hopes summer drawdowns will have desired effects on vegetation and make way for good forage foods. After that, it all depends on rainfall in the fall to fill the impoundments.

“All I can reliably say right now is we’ll manage as best we can with the conditions nature gives us between now and then, and hopefully, things will work out to make for a good waterfowl season when the time comes,” he said. 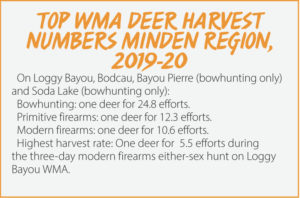 On DMAP private lands, the region’s above-average mast crop last year, he said, “got the deer (and other animals) through the winter all right.”

For WMAs, Johnson reported, “We’ve had above-average rain so far this year, but not so much as to cause any serious problems for most wildlife species. Browse is currently in good condition and should remain so as long as we continue to get at least average rainfall for the rest of the summer.”

On DMAP private lands, the way the table was being set a few months before the season, Johnson believed deer herds will respond in a positive way.

“As long as we don’t go into some bad drought or something, we’ll have plenty of deer. If it’s cold, we’ll probably have a lot of happy deer hunters,” he said.

Loggy Bayou WMA leads the way during the three-day modern firearms either-sex hunt with one deer harvested for every 5.5 hunter efforts. Bodcau, a 33,766-acre WMA in Bossier and Webster parishes, is a good destination as well as an area to get away from the crowd. Many of the deer come from the transitional zones, the edges of different habitats.

On DMAP private lands, Johnson reported that while quality varies substantially across the region, deer hunters can produce “quality deer” on any of it if they manage their deer herd correctly, keeping their herd below carrying capacity, keeping sex ratios relatively balanced and allowing bucks to live a few years.

On WMAs, he said, “Some nice deer are taken on both public and private lands in this area every year, and last year was no exception.” Historically, Bayou Pierre WMA, which is bowhunting-only, gives up some of the biggest bucks in the region.

Wood ducks, gadwalls, teal and mallards should be the dominant ducks gunned down this season in the Minden Region, particularly on Bodcau WMA. The degree of success depends on weather and how much it influences or doesn’t influence the fall flight. The other top pick is Loggy Bayou WMA. Bayou Pierre WMA’s duck hunting is limited to lottery hunts. In addition to regular and youth lottery hunts, a duck blind for wheelchair-bound outdoorsmen is available. For more information call the Minden Region office at 318-371-3050.

Because the acorn crop was “pretty good” last winter, squirrel reproduction success should have been high, thus providing hunters with “good” squirrel numbers — mostly grays with a few foxes — this season, Johnson reported.

With a large variety of tree species in the upland hardwoods, piney woods and bottomland hardwoods, at least one and possibly several mast crops are available to squirrels, particularly on Bodcau WMA. Two seasons ago, LDWF staffers checked 1,429 hunters, who killed 1,655 squirrels there.

The Barnett HyperTac 420 crossbow packs a wollop in a compact package. It is one of the most portable hunting crossbows on the market. […]