What does the season hold for public- and private-land hunters who pursue deer, ducks and small-game species this fall and winter? Here are Louisiana biologists’ ideas on the subject.

Combine the vast acreage of state-managed Wildlife Management Areas with an equally vast amount of private land, and you get an eye-opening 3 million-plus acres in Louisiana, the Sportsman’s Paradise.

The Louisiana Department of Wildlife and Fisheries oversees more than 1.6 million acres on WMAs, with habitats varying from upland pine-hardwood to cypress tupelo to bottomland hardwood to brackish marsh. Adjoining much of that habitat are approximately 1.6 million acres enrolled in the LDWF’s Deer Management Assistance Program, boasting more than 700 participants: hunting clubs, private landowners and managers.

Tony Vidrine, Lafayette Region biologist manager the past 17 years and a LDWF biologist for 36 years, was confident about what awaits hunters in the woods and swamps on private and public lands in the his region.

“I expect an average to good season this year as far as deer and small game,” said Vidrine, who is also confident that, unfortunately, the once-promising turkey population in the region hasn’t bounced back.

The Lafayette Region’s turkey numbers, particularly on Sherburne WMA, have been on a marked decline since the Morganza Spillway was opened and flooded in 2011. Turkey numbers also plummeted when spring flooding impacted Richard K. Yancey and Grassy Lake WMAs.

“This flooding is occurring on an annual basis, and we cannot get a break for a good turkey nesting season on these WMAs,”Vidrene wrote in a lengthy report filed June 30. “We are beginning to see an increase in visual sightings on Sherburne WMA. With a couple of dry nesting seasons and an adjustment in season dates, hopefully we will see some improvements in the future.”

After this spring’s flooding lasted into early summer, all roads were reopened July 16 on Grassy Lake WMA and nine roads reopened July 15 on Richard K. Yancey WMA. Other roads and trails on the latter area were scheduled to reopen when floodwaters receded and they were inspected and repaired.

How the region’s table is set

On DMAP private lands, Vidrine said there is no concern about drought conditions or flooding because rainfall amounts have been average this growing season. However, the Mississippi and Atchafalaya rivers flooding well into summer for a third-straight year inundated land in the batture and forced wildlife to seek refuge on protected sides of levee systems, putting additional stress on adjacent habitat and agricultural lands. 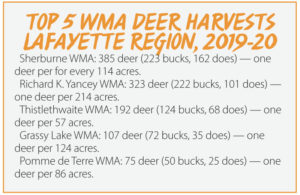 When animals return to areas impacted by floodwaters, the amount of available food hinges on how much time remains in the growing season after the water recedes. Biologists have seen a lack of recruitment and a reduction in lactation in the deer herd and have subsequently lowered antlerless deer harvest opportunities to avoid more stress on the deer herd. Overall, favorable browse conditions were found by biologists conducting DMAP browse surveys in the spring. However, keep in mind that the amount of browse on private land varies property to property, depending on the age of timber stands, whether timber stand improvements have been done, and whether flooding has impacted the property.

Sherburne WMA recently had three timber harvests, providing prime habitat for wildlife. Although the cuts were small, they still provide more food and cover, Vidrine reported. Mast crops on the WMAs were moderate last year on all red oaks and fair on white oaks.

Thistlethwaite WMA continues timber harvests, creating excellent habitat conditions. Flooding has affected habitat on Richard K. Yancey, Grassy Lake and Attakapas WMAs, but high water receded in late June, and all should recover. However, fawn recruitment has been affected on Richard K. Yancey, Grassy Lake, Attakapas and Elm Hall WMAs due to the duration of flooding.

Reproduction has trended down on those areas with prolonged flooding during breeding and fawning seasons. Browse conditions are favorable on Spring Bayou and Pomme de Terre WMAs, where no major flooding occurred during spring and summer.

For DMAP private lands, Vidrine rates the overall deer-hunting harvest a seven out of 10, noting that deer are plentiful in the region, but not as much as in other regions. The region’s upper parishes, with their bottomland hardwood habitat, support more deer than those with swamp and marsh habitat. Deer density varies between tracts, depending on how particular hunting clubs manage the deer herd. Most hunting clubs in the region’s upper areas have a moderate to dense herd. 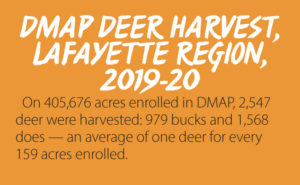 Vidrine rates the overall deer harvest on the region’s WMAs at 6 or 7, noting that harvest numbers are based on only managed hunts around Thanksgiving, which aren’t conducted during peak rut time. Deer movement always depends on weather conditions that weekend. Last season on Grassy Lake, one deer was taken for 6.4 hunter efforts; Pomme de Terre, one deer per 9.4 hunter efforts; Sherburne, one deer per 16; Richard K. Yancey, one per 18.7, and Thistlethwaite, one per 22.6 efforts.

According to Vidrene, Richard K. Yancey WMA apparently has rebounded.

“Yancey always comes out with good deer out of that area,” he said. “I’m expecting a good season there. We should see some good come out of there. They had nice deer, but the numbers of big deer weren’t there as usual.” 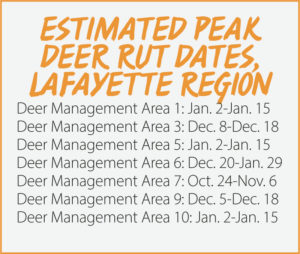 Vidrine also rates quality deer hunting an 8 on WMAs, noting the region is known for big deer due to the abundance of nutrients the Mississippi River alluvial valley offers in available forage and mast on WMAs.

Vidrine reported there is no data available for private-land duck harvests in the region, but he said last season’s hunting success was fair to poor on a majority of private lands. This region, however, offers prime duck-hunting opportunities, considering the number of flooded agricultural fields, moist-soil impoundments and lakes.

Habitat looks good in the WMA impoundments the state manages for waterfowl use. Hunter success will depend on weather patterns and how many ducks make it this far south. Top WMAs for waterfowl hunting are Richard K. Yancey, Sherburne, Pomme de Terre and Spring Bayou, he said, noting the first two offer greater opportunities because they are larger than the other WMAs. A general waterfowl lottery hunt will be held on Sherburne WMA. Deadline is Sept. 30. Go to https://la-web.s3licensing.com/.

“With the good mast crops we have observed the last couple of years, we expect the squirrel population should remain favorable to hunters on both private lands and WMAs this coming season,” Vidrine wrote in his report.

Squirrel hunting’s popularity has been high, with some areas reporting good bag numbers for the past few years, he said, noting more squirrel hunters are going into the woods with squirrel dogs.

“Those areas that did good with squirrels last season will do good again,” said Vidrine, who listed Richard K. Yancey, Thistlethwaite and Sherburne, which experienced a good acorn crop last year, as the top WMA squirrel hunting destinations

Vidrine reported that rabbit populations are high on private and public lands wherever habitat is favorable. Areas with plenty of ground cover and/or thick understory cover likely will have better rabbit reproduction and hunting success.

What the Louisiana hunting season holds for hunters in the Coastal Lafayette Region who pursue deer, ducks and small-game species this fall and winter. […]

Youth squirrel season on select LDWF WMAs will be Sept. 26-27 and not Sept. 28-29 as was incorrectly published in the hunting pamphlet. […]

Don’t turn your nose up at deer hunting in Louisiana’s coastal areas. Those whitetails don’t get as much notice, but they’re just as tasty. […]