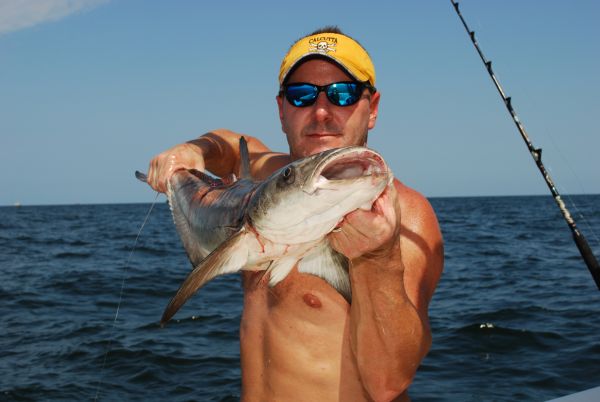 Cobia, often called ling or lemonfish in Louisiana, are not bashful feeders. Although they can be stubborn at times, especially if a piece of hardwood or rubber is thrown at them to eat, they will usually grab almost any bait that is offered — often right next to the boat.

Not only are they not scared of boatloads of anglers, but they seem attracted to noise, something that knowledgeable anglers will use to their advantage by banging on the floor or beating the gunnels of their boat.

Cobia feed from the surface of the water down to the bottom, often over 100 feet deep. And while they have preferences, apparently they will eat almost anything. Anglers who specialize in cobia like to keep (usually de-spined) hardhead catfish on hand to tempt them. White trout are another favored offering.

Because of this, it is easy to assume that fish are the No. 1 item on a cobia’s menu. But that’s the wrong answer. Study after study shows that blue crabs come in as their most-preferred food of all.

In a food habits study done in the lower Chesapeake Bay, the researcher examined 78 cobia studies and, while he found 28 different species of animals in the stomach, swimming crabs (the family of blue crabs) made up 78 percent of their diet.

As an interesting aside, the scientist found a number of cobia had eaten cownose rays. This species, called devilfish or choo-choos by Louisiana commercial fishermen, is common in the Gulf. Baby stingrays have also been taken in numbers from cobia stomachs in Australia.

Another, larger food habits study was done in Mississippi. Here again, blue crab relatives dominated the diet, being found in 49 percent of the stomachs. Twelve different species of crabs were noted. This predilection for crabs explains one cobia nickname in other areas — crabeater.

Also eaten were finfish, with by far the most common being hardhead catfish (24 percent) and eels (18 percent). Cobia tended to eat more finfish as they became larger. For example, only 7 percent of cobia under 37 inches long had eaten hardheads, but that number increased to 44 percent in cobia larger than 45 inches.

Fueled by their high-protein diet, cobia grow fast. In a large study, Mississippi biologists sampled 1,005 ling. An otolith (ear bone) was removed from each animal; each otolith was cut in a very thin cross-section to allow researchers to read the age of the fish. Cobia, like other fish, lay down a ring of bone in each otolith for each year of growth. A total of 565 fish produced readable otoliths. The accompanying table provides the results of the aging.

The results showed that it is very difficult to estimate the age of a cobia based on its size. For example, at age 4 they ranged from 34 to 50 inches long. Looking at it another way, in the 40- to 48-inch group, fish from 2 to 9 years old were found.

Their vigorous growth rate has long made cobia of interest to those scientists interested in developing offshore aquaculture in the United States. And it has happened, but not here. Rather, it is being done in nearshore offshore cages in China, and in a big way. In 1997, aquaculture production of cobia was zero. By 2011, 50 million pounds were produced and 70 million pounds were projected for 2012.

How cobia spawn is no longer a black box. In the Mississippi study, females were found to outnumber males, 730 to 275. Females were larger, too, averaging 4 inches longer. Male cobia mature earlier than females, beginning at age 1 at 21 inches long and 2.5 pounds. Females begin maturing a year later, at 27 inches long and about 7 pounds.

Cobia form spawning groups in the Gulf of Mexico from April through August. A female may spawn as often as every four to five days in the northern Gulf or up to 36 times per season. By comparison, southern bluefin tuna spawn every day, yellowfin tuna every one to two days and wahoo every two to six days during their spawning period. Using average numbers, a 44-inch female cobia can produce 21 million to 38 million eggs per season.

Bears are the center of a growing controversy over crowding other wildlife out of their habitat, property destruction and human interaction. […]

You can hunt turkeys all day in comfort and with all your necessities with the Nomad Bull Lounger Turkey Vest. […]