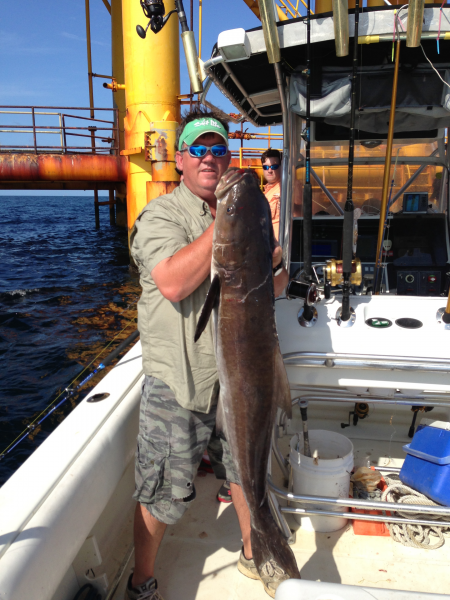 For the first time in his 14 years as a guide, Capt. Daryl Carpenter has had two cobia hit bait that he was actually trolling for dolphin with this year offshore from Grand Isle.

The cobia bite has been pretty consistent lately and Carpenter, with Reel Screamers Guide Service, said he’s had most of his success in 150- to 350-feet of water.

“I just think we’re having a banner year for whatever reason,” he said. “They’re probably competing for food with the red snapper that have taken over everything.

Lots of luck and several factors are involved in a successful cobia trip, but Carpenter said being able to read conditions is key.

“But if conditions present themselves right, it’s a recipe for success.”

Since the cobia are caught sight-fishing, clear water is a must, he said.

“When you’ve got good grass patches with pretty water, then it’s well worth your time to just cruise it real slow,” he said. “They’ll generally stick their head out from under the grass, and then it’s up to you at that point to get them where they’re ready to play.”

Throwing chum and then following that up with live bait is particularly effective, he said.

“When you have him looking for that next piece of scrap when no other fish are around, you just pitch it to him and generally they’ll inhale it,” he said. “You get them in competition with other fish with a little bit of chum you’re throwing and they tend to get more aggressive.

“You put something wriggling in front of them like a live croaker, and generally nine times out of 10 they’re going to hit it.”

The tackle he uses to catch the cobia all depends on what he was fishing for when they make an appearance.

“The rig you catch them on dictates how you fight them,” Carpenter said. “If he hits a 300-pound amberjack rig, then I can lock the drag down and just drag him to the boat.

“But if he hits a spinning rig that I have set up for mangroves with a 40-pound leader on it, we have to loosen the drag up and go drift around the Gulf of Mexico for a while and fight that fish.”

Carpenter stressed the biggest key in catching more fish was having another angler ready with a baited hook when one cobia is on the line.

And the seaweed that’s wreaked havoc with Grand Isle’s beaches have been a boon for cobia fishing this year, he said.

“It’s a different thing. The stuff you see on the beach is dead and nasty,” he said. “But when you get 30 miles offshore, it’s all bright yellowish-brown and alive, filled with crabs and turtles and everything. It’s got fish all around it.”