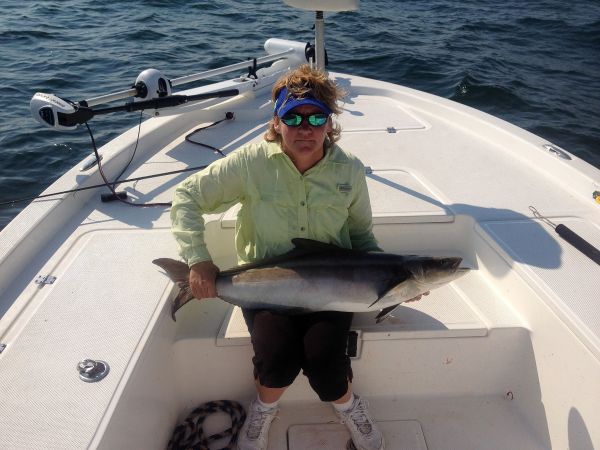 Kaplan’s Skip Floyd was on some big fish.

The 47-year-old tournament redfish angler had spoken to his friend, Paul Davidson Jr. of FishTale LLC Charters of Hackberry, and he conspired to get to some huge cobia Paul told him about.

“I launched and headed south from the Cameron Jetties, running 15 miles out to the marker buoys where the fish were reported,” the angler said.

Once he and angling buddy Dan arrived near marker buoy 23, the 25-foot Sea Fox drifted into range of the marker.

“We were 15 yards away when we saw the fish,” Floyd said.

Seeing other cobia on marker buoys, Floyd knew what to do next.

“I ran home and told my wife, Tanya, about these fish,” he said. “She had never caught any of these before, and she loves fishing.”

The very next morning found Floyd and Tanya slowly edging toward a marker buoy.

“We were about 10 yards away and letting the tide push us near the buoy,” Floyd said. “I told her to cast the yellow Al Gag eel, and a good fish made a lunge at it.

“Tanya immediately pulled the bait completely out the water at first — because the size of the fish actually intimidated her.

“She had never caught anything that big before.”

Once Tanya placed her bait back into the water again, the fish charged it aggressively and the battle was on.

“It was a long fight that Tanya had with that cobia — about 45 minutes of her walking aft and stern, all over the deck of the boat, really,” Floyd said. “The cobia also ran under the boat; the whole time, Tanya (was) reeling and allowing runs with the drag chugging.”

After drifting nearly 1.75 miles away from where Tanya hooked the fish, Floyd gaffed it near the boat.

According to the angler, Tanya had little control left of her upper body having spent so much of its strength in the encounter with the fish.

Floyd then took his camera out and snapped a photo of Tanya sitting exhausted on the deck of the boat cradling a 40-pound cobia.

“These fish will be out here until the end of October, and there is little if any fishing pressure on them,” Floyd said. “I figured that the lemon Al Gag eels would work very well in attracting them, so we took the opportunity while they were there.”

In the summer, cobia migrate to locations south of the Cameron jetties, where these fish can be found lurking near flotsam, marker buoys, rigs and other structures.

“We saw even larger fish, and there were no boats at all out here,” Floyd said.