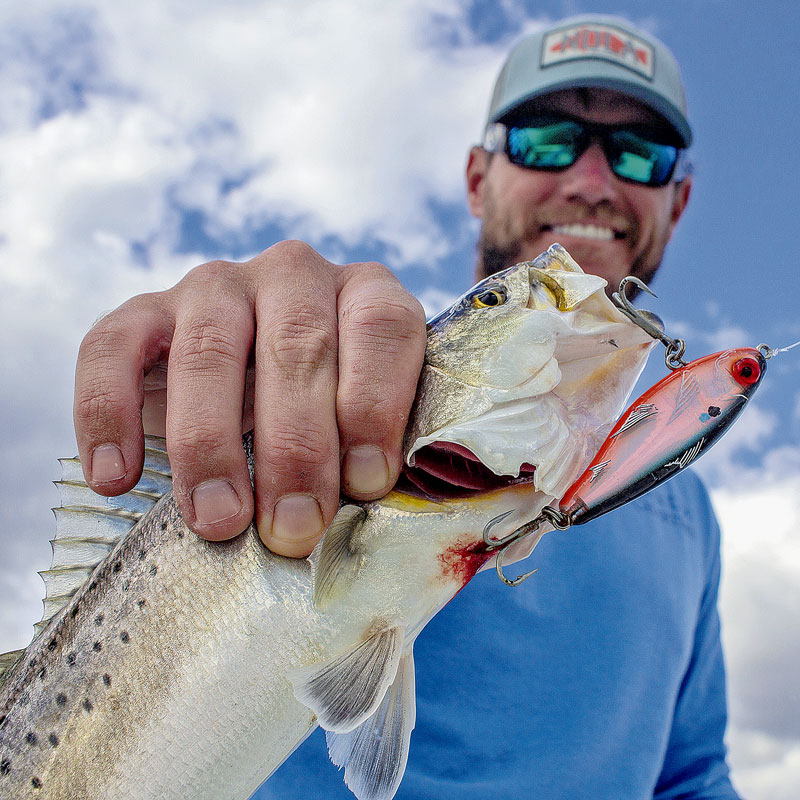 Adam Shields has a strategy to intercept a speck’s transition this month by using travel routes, baitfish habits against them.

A speckled trout’s behavior is governed by its instincts and other variables beyond its control. Topography, seasonal changes in water salinity and the life cycles of food sources are important considerations for the angler. A grasp of these conditional factors is fundamental to success in any type of fishing, but if you aspire to catch speckled trout consistently year-round, applying knowledge in these areas is critical.

Adam Shields of Slidell, who owns Black Dog Charters and Black Dog Lodge on Lake Catherine, has a winning strategy for catching trout in September — primarily on Lake Pontchartrain, Lake Borgne and in the Biloxi Marsh — that uses these environmental forces against the fish.

Although Shields built his reputation as a serious angler in redfish tournaments — he fished competitively for more than seven years on several tournament circuits — he focuses on putting clients on speckled trout.

“I get excited around September because it’s a key time of transition for trout,” Shields said, explaining that lower, post-spawn salinity requirements and higher salinity in the estuaries due to low river flow encourage trout to be more adventurous. Plus, juvenile white shrimp leave the marshes and venture into open water to mature and eventually spawn themselves.

“The shrimp are on their way out,” Shields said, “and the trout are moving in; it’s like they are on a collision course. You can catch ’em two at a time once you find them.”

“Tidal highways are the place to be in September,” Shields said. “I do a lot of moving around, fishing areas where there’s moving water, especially on falling tides.

“I’ll even adjust a trip to specifically hit a falling tide. In situations where the tide is not falling until afternoon, I’ll run later to make sure that I hit it.”

“It may be a relatively narrow bayou, maybe only a couple of boat-lengths wide, but it could be 20 feet deep,” Shields said.

Hit these areas during outgoing tides.

“When the water is falling, when it’s ripping out of the marsh, it tumbles the (shrimp) on the bottom, and they pile up on the slope of the bayou as it opens to the bay,” Shields said, explaining that trout will congregate to feed where the tide concentrates the bait.

“You’ll find the trout at the edge of the bay just before the drop,” Shields said. “The water is not ripping as hard there, so the trout don’t have to fight the current as much.”

It’s an easy meal. It’s a trout trap. As Stephen King wrote in The Gunslinger, “The trap had a ghastly perfection.”

Work your way up the slope to find the fish.

“If the depth of the bayou goes from, say, 30 feet up to 4 to 8 feet,” Shield said, “I’ll start at about the 20-foot mark with live shrimp on a drop-shot rig and work from there, up the slope, to the shallower water, eventually tight-lining live shrimp on a double rig under a cork as I near the shelf at 4 to 8 feet.”

“I always look at the tide charts,” Shields said, “but it’s equally important to look at what the weather is doing on the days leading up to the trip, because wind can have a big effect on the tide. A strong east wind, for example, will hold the water up, counteracting the predicted fall.”

Likewise, a strong west wind can strengthen an outgoing tide.

“It also helps to go back and look at trends in actual water data,” Shields said. “The U.S. Geological Survey (USGS) is a great resource for information about water levels.”

The variance between tide predictions on a given day and the actual measurements recorded by USGS reveals the wind’s power to affect tides. Studying the data will help make your personal predictions more accurate, and help you catch the tide.

Shields’ strategy for catching redfish in September mirrors his trout strategy, but it is applied one step up the water system. “Look for a little pond system inside the marsh that necks down to a single outlet,” Shields said. “Start there, and work the bayou a couple of hundred yards on each side, looking for points and small cuts and drains.”

During an outgoing tide, he said, “Bait rolls out of the marsh, and the redfish wait (at these outlets) ready to eat.”

“Since September is still pretty hot, a few tripletails are still hanging around from the summer,” Shields said. “I’ll look for them until the first cold snap, generally between Lake Borgne and the Mississippi Sound.”

“When I see one, I’ll either free-line a live shrimp to him or cast a live shrimp under a cork in front of the fish, and work it back to him,” he said.

Why do people freak out over this one fish?

In this video, Jared Serigné teamed up with Devin Denman from Louisiana Fishing Blog to figure out why speckled trout is such a popular fish. […]

With no motorboat traffic, Bayou St. John is a great, safe place for new and experienced kayak anglers alike. […]