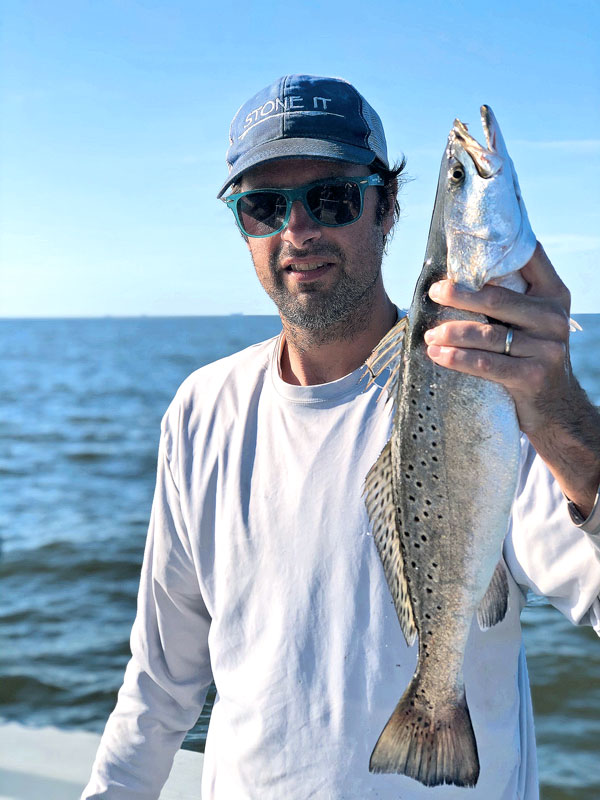 Availability of bait causes seasonal changes in speckled trout behavior, diets. Understand that, and your fishing success should improve.

There are times when speckled trout will strike at something that falls in front of them, but whether you fish live or artificial baits, understanding a trout’s normal feeding preferences can help you be more successful. They eat many types of fish and crustaceans, including crabs, which I find strange given a trout’s soft mouth, but four are primary food species.

The striped mullet is one of Louisiana’s more commonly seen fish in both saltwater and freshwater. Adult mullet move offshore to spawn in late fall and winter, and juvenile fish begin coming inshore when they are around 1 to 11/2 inches long. They can grow up to 20 inches and are popular table fare in the eastern Gulf of Mexico. They are fast swimmers that like to keep moving and are often observed traveling by air.

Because they spawn in the winter, there is a season when the size of the mullet is preferred as food by speckled trout. Trout 3 years or older will certainly eat a 7-inch or larger mullet, but in my experience, our Louisiana trout prefer young-of-the-season sized mullet, which anglers call “finger mullet.” Finger mullet are generally in the 3- to 5-inch range in late winter and spring, making them a perfect appetizer for the coming shrimp a la carte.

Mullet school for protection and often eat algae and plant matter near the surface. This behavior makes schools of finger mullet a temptation for hungry trout, which will cruise under a school, looking for mullet that gets detached from their mates.

You may have noticed that our most-productive time to fish topwater stick baits is winter and spring, and a walk-the-dog presentation is a spitting image of a finger mullet moving near the surface. When winter arrives, look for schools of finger mullet and throw any of the stickbaits such as Matrix Mullets, SheDogs and Spooks near those schools. Topwater baits also work very well in spring when worked along rocky shorelines, such as the rocks along the MRGO channel.

Atlantic croakers are in the same family as speckled trout, but family relations do not save them in the uber-competitive marine environment. Some trophy trout anglers are convinced that gator trout actually hate the very existence of croakers. Live croakers as bait are reported to guarantee an attack by any large trout in the vicinity. Why not? Croakers are dangerous predators themselves, and maybe gator trout remember being terrorized by croakers when they were mere fry.

Croakers live at the bottom of the water column, where they use structure to avoid becoming meals for a speckled trout. I have caught many croakers while jigging the bottom, put them on a hook and thrown them back out free-lined. The hook and line apparently inhibit their survival tactics, because within a few minutes, the croakers were viciously attacked and eaten by speckled trout.

Adult croakers in Louisiana travel to the sounds and barrier islands to spawn in winter. Like trout, they are broadcast spawners; eggs and sperm are emitted into the water column where they mix to achieve fertilization. The fry grow quickly, and by spring, they are 2 to 3 inches long. A 16-inch trout will readily attack and eat a 6-inch croaker, but it is the 3-inch croakers that are commonly sold as bait along the coast, primarily in late spring and early summer. This size of croaker is the young of the season and are caught for bait when they follow bayous up into the marsh.

It is these bayous infested with baby croakers where I go in the spring to bump swimbaits along the bottom in search of quality sized speckled trout.

There is no inshore experience quite as visceral as fishing under seagulls diving on shrimp. It is visually chaotic, an audible cacophony, and with a fishing pole, I get to feel the energy with which speckled trout attack the shrimp. Without shrimp, our Mississippi River estuary would not be as exciting, nor be the ecological marine paradise we enjoy.

We think of shrimp as small creatures, but they are small only because most shrimp have their growth stopped in the belly of a fish, fowl or mammal before they reach their first birthdays. Fortunately, our Gulf shrimp reach reproductive maturity around 6 months of age, and a shrimp can lay up to one million eggs in a single session. The eggs take only 2 weeks to hatch, so once the spawn begins, shrimp dump a huge amount of life into the coastal waters.

Shrimp is the primary food source of speckled trout up to the age of 3 or 4. Biologists believe shrimp provide a nutritional balance advantageous to reproduction among speckled trout. Given a shrimp’s nutritional value and the abundance of larger shrimp in summer, it seems like no coincidence that speckled trout reproduce in the summer.

Two types of shrimp inhabit Louisiana waters; their growing seasons are slightly offset. Brown shrimp become bait-sized in the spring and migrate out to the Gulf in the early summer to reproduce. White shrimp reach that size in early summer and move out during summer and into fall. These overlapping seasons produce the long stretch of meal-sized shrimp that specks depend on for maximum reproduction.

If you fish artificial baits, this means that if you are looking to catch high numbers of trout, adjust your presentation in summer to match the visual and audible characteristics of shrimp. In practice, this means popping shrimp-colored jigs off the bottom in deep water near structure. If in shallow water, attach a popping cork above the shrimp-colored jig.

A popping cork most closely matches the movement and sound of shrimp. Shrimp will dart to avoid predators, a motion that a popping cork imparts to the bait. Snapping and clicking are sounds that shrimp make, which biologists believe is a form of communication and possibly a method to intimidate predators. A good popping cork will make clicking sounds, plus throw in a splash that a trout may interpret as the sound of his schoolmate grabbing a meal.

Menhaden, aka pogies, are the most-abundant baitfish in Louisiana waters during summer. They are so abundant that a large commercial fishery is focused on their harvest. The menhaden harvests in Louisiana are reported to generate more than $90 million per year. They are valuable commercially for their oil but are not consumed by humans.

A large pogey in Louisiana is 8 inches long, but they can reach 12 inches. They are filter feeders and consume mostly zooplankton and phytoplankton. They are also a schooling species that relies on this behavior as protection from predators, and they will often form huge schools in open water. Schooling may work well as protection from speckled trout, but it makes their vast schools easy prey for humans who use spotter planes and nets to sweep them up.

Live pogies are responsible for luring many sizable trout onto anglers’ hooks in Louisiana, so we know that they are readily eaten by speckled trout, and given their high oil content, they are a quick means for trout to pack on calories during the spawning season. They are less hardy when kept as live bait, compared to croakers, and are not usually sold in bait shops. However, many Louisiana anglers throw cast nets to collect a day’s worth of pogies and usually fish them free-lined instead of under corks.

A few favorite hard baits are surprisingly accurate facsimiles of the pogey profile, and these baits are big producers of speckled trout. The lure that fits the profile and action perfectly is the MirrOlure MirrOdine. It has a very convincing, lifelike action when retrieved and can also be effectively worked in a twitch-pause cadence.

As the years race past, outdoor memories grow fonder

As time has passed, Kinny Haddox has grown to love writing about the outdoors and fantastic people as much as he enjoys hunting and fishing. […]

About Jon Miller 36 Articles
Jon Miller is an engineer, lifetime fisherman, and host of the YouTube channel Jon Miller Fishing.