This Trout Master catches plenty of big speckled trout all summer long. Here’s how he does it.

In his 35 years of guiding on Grand Isle, Carol “Zutie” Auenson has seen a lot of changes, things he talks about with sadness.

“This whole area has changed. The islands are gone. Reefs we used to catch fish on don’t have fish any more. I don’t know why. We are still catching a lot of fish, but we are working harder for the numbers that we get.

“I could probably catch more if I used live shrimp, but I fish croakers. Croakers catch bigger fish. When we catch trout, nine out of 10 stay in the boat (they are not undersized). And I don’t go through as many baits, because everything eats shrimp.”

Auenson does catch big trout. Grand Isle is known for producing small trout and lots of them. But here, in the land of little trout, 10 6-pounders have come over the rail of his boat, as well as more than 30 5-pound fish.

Although Auenson loves to use soft plastics on jigheads, his charter business for speckled trout at Grand Isle is built around using live croakers as bait. He feels that croakers offer some versatility that other live baits and plastics don’t have. “You can catch specks in murky water with croakers because they make croaking noises,” he explains.

How to fish live croaker

Auenson usually hooks his croakers through the flesh beneath the rear of the dorsal fin. He will also occasionally jab the hook through the baitfish’s lips, but he feels croakers swim more actively when hooked through the back.

His basic rig for fishing live croakers is a Carolina rig: an 18-inch leader with a 3/0 Kahle hook on one end and a swivel on the other. Threaded on the main line above the swivel is normally a 1/2-ounce egg sinker, although he will use a 3/4-ounce weight if the surf is rough and he has to make longer casts to reach his favored fishing spots near the beach. The leader is 30-pound monofilament.

“Nothing special like fluorocarbon,” he said. “I just don’t see no difference, and (mono is) a lot cheaper.”

How to fish plastics

Auenson uses soft plastics on 1/4-ounce jigheads secondarily to live bait. He keeps his selections simple, his favorite being smoke/glitter split-tail beetles. Other colors he uses include glow, white and blue moon. On occasion, he will also use plastic cocahoe minnow-type lures and straight-tails.

He may or may not use an 18-inch shock leader tied line to line when he fishes with jigs. If he doesn’t, he reties frequently. Plastics are useful in places with too many obstructions to fish Carolina rigs, such as near rock riprap. He fishes plastics using a slow, steady retrieve with an occasional twitch.

Auenson also always keeps a rod rigged with plastics for fishing under birds. While he quickly admits he isn’t crazy about fishing under diving birds in bays and lakes, he will stop to fish them along the beaches because the schools don’t move as much as do those inside. He cautions, however, to know the difference between “liar birds,” as he calls smaller terns, “which are always dipping and diving,” and larger gulls that only dive in groups on feeding fish.

He also uses plastics on jigs to find fish because he can cover a lot of water with them. But when he finds trout, he picks up a rod with a Carolina rig and a croaker on it. “You can catch more,” he said, “and you catch bigger fish. You gotta remember that I like bigger fish.”

“Some people like that braided line,” he said. “I don’t. It has no stretch, and you can pull the hook out of their mouth.”

Favored rods for years were Falcon, but Auenson didn’t like a recent style change and has shifted over to Castaway rods. His rods are either medium- or medium-heavy action in 61/2- or 7-foot lengths. “You need a rod with a little backbone for croakers,” he said. 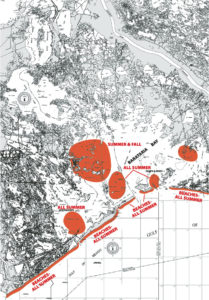 As a guide, Auenson must fish all moon stages and all tides, but he does have definite preferences.

“We like to fish the climbing (increasing) moon. After the full moon, fishing starts going down,” he said.

As for tides, he said, “I prefer an incoming tide. I like it to start at 4 a.m. and run until noon. You get clearer water. As for range, I really don’t like a heavy range. Fish don’t feed too much. We like .7 to 1.2 feet. A 1.9(-foot) range is too much. I will often move spots to get ahead of a real strong tide — go inside until the tide catches up; then go inside more.”