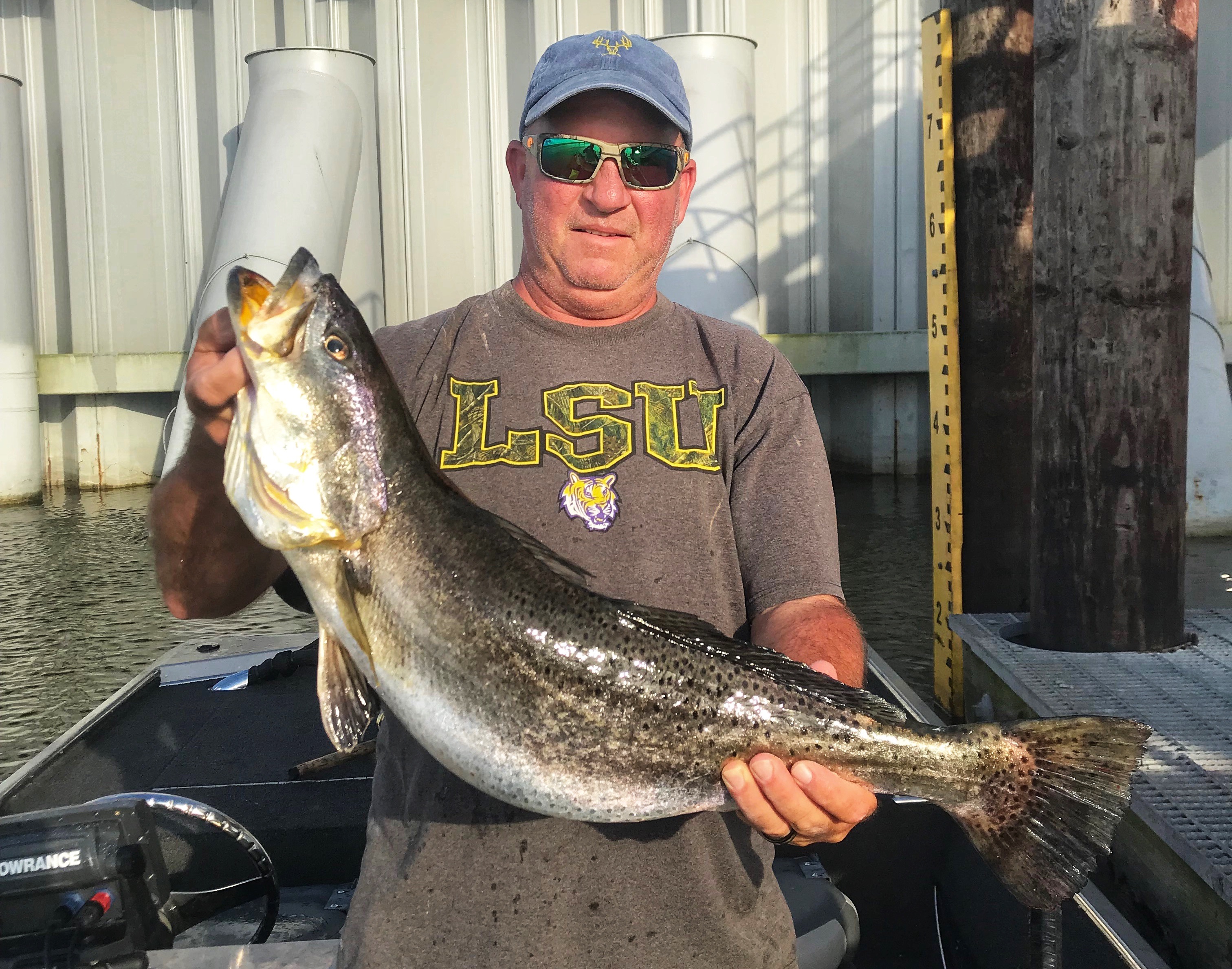 Montegut angler says in 30 years, he’s never caught big trout in his redfish honey hole like he did last Friday (May 17)

Anglers trying to plan their fishing trips on the “perfect weather day” can attest that it has been almost impossible to do lately. In fact, the weatherman forecasted last Friday to be such a day — calling for clear skies and calm winds. But alas, as has happened more often than not this past spring — winds steadily increased Friday morning soon after daybreak along the Louisiana coast, thwarting the best-laid plans of local fishermen.

Charlie Brown of Clinton was at his camp in Montegut and still planned to go fishing. He normally would have headed down to Cocodrie and fished the barrier islands but winds whipped up the waves in Terrebonne Bay to uncomfortable levels.

Fish caught less than a mile from the marina

So he headed for his fallback spot — a rock-lined canal that empties into the bay. Brown was fishing less than a mile from Sportsman’s Paradise Marina below Chauvin. The change of plans put the fish of a lifetime in his boat. Brown ended up catching an 8.02-pound beast of a trout in a spot he least expected.

“I was just trying to put a few redfish in the boat,” said Brown who claims there’s really nothing special about the way he was fishing that day. The Exxon employee was fishing with his normal redfish rig which consisted of a live shrimp rigged under a popping cork. He fishes for redfish with a 30-pound mono leader and #2 Kahle hooks.

The 48-year-old, who has fished the area all his life, noticed that the water was unusually clear as he trolled along the rocks.

Then all hell broke loose

“We were pitching to the rocks and reeling it in 10-20 feet when the big fish hit.” As soon as the speck surfaced, all hell broke loose. “I’ve fished that canal for 30 years but I’ve never seen a trout that big come out of there. You don’t even go there looking for trout, that’s not what I came for.”

Brown described the canal as being lined with rocks and dropping off to around 12-foot deep in the middle with a hole about 30 feet deep near the mouth.

Although Brown admits that overall it was a slow day — but he wouldn’t change a thing. His trophy fish is now at the taxidermist. He also caught five other big trout in the same canal that day — all between 2 and 4 pounds, all healthy and all full of eggs.