Matching size to water depth and current is key

According to Chas Champagne, choosing the right jighead to match water depth and current can be much more important than the color, size or shape of the artificial lure you’re fishing.

That says a lot, because Champagne, the owner of Dockside Bait and Tackle’s ultra-popular Matrix Shad and Vortex Shad soft-plastic paddletail lures, which come in a variety of colors that have become huge favorites for Gulf Coast anglers pursuing speckled trout and redfish.

Generally speaking, Champagne prefers to use the lightest weight possible that will get the lure to the bottom, but he said you’re definitely safer going too heavy rather than too light.

“Whereas with the ½-ounce jighead, you’re still in the strike zone in 5 feet of water. It’s not that big of a deal.”

Champagne pointed to bass fishermen, who successfully punch through grass and vegetation with heavy, 1- and 2-ounce bullet weights to seek out bass in shallow water.

“You’re going to tell me that it matters if your jighead is too heavy?” he said. “Absolutely not.” 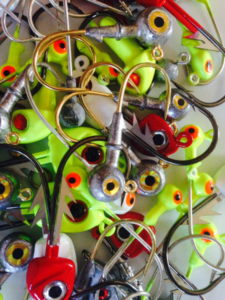 Though there’s no set formula to match water depth and current with jigheads, Champagne typically doesn’t use a 1/8-ounce model unless it’s under a popping cork, because anglers typically are fishing in depths deeper than 2 to 3 feet where that light weight is most effective.

“You can use it if you’re casting and retrieving in 2 to 3 feet of water where the lure’s tail is always moving and it doesn’t have to swim down,” he said.

The lure’s action when swimming down is critical to using a paddletail, and how it moves with just a ¼-ounce jighead is key, he said.

“If you put a ¼-ounce jighead on a lure and let if free-fall to the bottom; if it swims and its tail moves, it’s a good product with good action,” he said. “If it doesn’t move, a lot of times it spirals down, and the aerodynamics aren’t right. That’s not good. You’re getting no action.

“You might as well fish with a stick or a twig.”

The bait falling naturally in the water by the pull of the jighead alone is key, he said.

One of Champagne’s big theories in effectively fishing with soft-plastic paddle tails is popping the lures and letting them rise and fall straight back to the bottom.

“When that jighead hits the bottom, it creates like a dust-cloud kickup,” he said. “That gets the fish’s attention a lot of times, because shrimp will bury in the bottom, and when they come out, the fish see a dust cloud.

“So when we have that lure falling to the bottom, we want it falling as fast as it can and creating as much disturbance as possible when it hits the bottom,” he said. “When we pop it, we don’t reel in our slack so tight to where you’re dragging it back to the boat. We pop it, reel in our slack real quick and let it fall straight to the bottom. You want it to plunk the bottom really hard. That’s a really effective technique.”

While he favors a ¼-ounce jighead in roughly 2 to 5 feet of water, he bumps up to the 5/16-ounce jighead if he’s sight-fishing for reds in the marsh where the water is shallow in ponds but gets 4 to 6 feet deep in connecting bayous.

The 3/8-ounce is his choice for 6 to 20 feet of water, and it’s his favorite for fishing the bridges in Lake Pontchartrain. But if the current is particularly strong, he’ll bump up to the ½-ounce.

“That way it will fall and hit the bottom where you want near the bridge,” he said. “If I’m fishing up against a bridge piling, the fish might be in a very particular spot.

“It’s just like bass fishing — you want that lure to hit exactly where you want it.”

But he stressed depth is just one factor to consider. Don’t forget about the current, too.

“The current is really more important because if you’re trying to pinpoint the lure hitting the bottom in a certain area, and it’s got current and you’re not using enough weight, it’s just going to blow your jighead way out of the strike zone.

“So if you’re tying to get it to hit the bottom in a certain zone, you need the heaviest weight that you can, to stick it right where it needs to be stuck.”