When weather conditions allow, break out of the marshes and ambush packs of speckled trout at the midway point between Grand Isle and Lafitte. Here’s all you need to know.

The battle of Midway, one of the most-decisive naval battles in all of World War II, was fought just six months after Pearl Harbor around a small atoll almost between Hawaii and Japan.

Our Navy was crippled by Japan’s surprise attack on Dec. 7, 1941, and the Japanese Imperial Navy developed a scheme to catch the American carrier fleet off-guard so they could finish the job they started at Pearl Harbor.

In May 1942 the Japanese set their plan in motion, intending to lure U.S. aircraft carriers into a trap and bomb them into oblivion. But what the Japanese didn’t know was U.S. Naval Intelligence had broken their communications code and learned their exact plans, down to precise movements, dates and times — so when the Japanese fleet showed up, we were the ones waiting to spring a trap.

In the resulting battle, the U.S. Navy sank all four Japanese aircraft carriers, a heavy cruiser, destroyed 248 of their aircraft and killed more than 3,000 Japanese.

We lost the carrier Yorktown, a destroyer, 150 aircraft and suffered 307 casualties.

Military historian John Keegan called the battle of Midway “the most stunning and decisive blow in the history of naval warfare.”

The Japanese never recovered from those losses and U.S. Naval dominance increased throughout the war.

So what does that have to do with fishing?

Here in Southeast Louisiana, our Midway is in Barataria Bay in the area halfway between Grand Isle and Lafitte, where with far less at stake we can get on the water and fight our own battles this month with the sizeable speckled trout that infiltrate the area.

“You want to come down to Grand Isle and catch some speckled trout?” he asked. 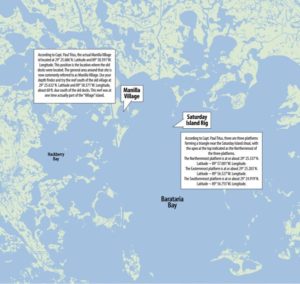 “No, this is the time to go to get in on some nice trout,” he replied. “You just have to know where to go.”

Since Bergeron is a full-time guide and resident of Grand Isle, I figured he knew what he was talking about. So I drove down the next morning and waited for him at Bridge Side Marina.

After launching his 24-foot Blue Wave Pure Bay, we headed out for Midway.

But most consider these summer destinations and are unaware the action starts this month.

“This time of year the trout are following the bait as it moves south down the Barataria Waterway into the open water,” Bergeron said. “That is the main channel that drains the whole Lafitte-area marsh, so as it drains the water and bait out of the marsh, the trout will follow right out into the bigger water of Barataria Bay, and we’ll ambush them right there.”

Our first stop was what’s left of Manilla Village.

For 100 years it was a thriving community of Filipinos who lived in houses on stilts — Filipino style — and made their living by catching and drying shrimp, mostly for export back to their homeland.

Hurricane Betsy decimated the community in 1965, leaving only rubble and pilings as silent reminders of what once was there.

Today, the village is only a series of pilings jutting above the surface.

“The water surrounding Manilla Village is about 5 feet deep, but where the pilings are it’s only 2 or 3 feet deep, where the land was,” Bergeron explained. “That rise in the bottom causes the water to swirl around it, sweeping bait along with the current. There are oyster shells on the bottom and a lot of underwater debris, so all that subsurface structure attracts fish.

“However I advise everyone to idle slowly around it, because there are a lot of pilings lurking just below the surface, eager to ruin your day.”

We were the only boat out there on this nice, sunny day, and I remarked how unusual that is at such a well-known hotspot.

“Not many make the long run out here in April unless they’ve heard the trout are biting,” the captain said. “Otherwise, they fish more inside.

“But when you get a good day like this, you have to make the run.”

We were both casting soft plastics about 2 ½ feet under corks, and I got the first bite on a small, chartreuse beetle. After reeling in a very respectable trout, I quickly caught another one just like it, and then a couple more after that.

“Give me one of those sparkle beetles,” Herk said. “These fish are ignoring my bait but they’re eating up your beetle.”

He switched baits and immediately caught a nice trout.

We were slowly trolling along the pilings, casting up alongside them and popping our corks. At a few spots, we caught a half-dozen or so fish before the action stopped and we resumed trolling.

It’s a tactic that works well anywhere when fishing for specks.

After a while Capt. Dee Price pulled up nearby with a group of customers, and they started casting near the pilings under a cork as we were.

Herk noticed they fished without success while we continued to catch fish after fish.

“What are you using for bait?” Price shouted toward us.

“Small, chartreuse H&H sparkle beetles,” Herk shouted back. “If you need some I think I have a pack I can dig out and give you.”

Price trolled up near enough for Herk to toss him a bag of the beetles. They trolled back to the pilings and also started catching trout.

“I can’t believe how much difference these baits are making today,” I said. “Usually if they hit one bait they’ll hit another. But today these fish want a small, chartreuse bait, and that’s all they’ll hit.”

Bergeron said the fish’s food source was probably the reason for the persnickety tastes.

“Obviously what they’re feeding on right now is small, probably small shrimp, and these beetles best match the hatch,” he said. “It’s why you can’t assume the fish aren’t at a spot until you’ve tried a variety of baits and colors.”

The action slowed at the pilings, but by then we already had a nice box of fish.

Bergeron pointed the bow toward the big Saturday Island rig, where he said he had caught some big trout just the day before.

“The water is deeper here — about 5 to 6 feet deep — and the bottom is littered with debris,” he said as he dropped the trolling motor and began working an inside pocket of the rig. “If you try fishing the bottom you’ll hang up just about every cast.

“I fish here about 2 ½ to 3 feet under a cork, and if you can get live shrimp that’s what you want to use.”

Since we didn’t have live shrimp, we threw our plastics. The chartreuse beetle attracted some hits, but the better bait at this stop was a Deadly Dudley in the yellow snow and opening night/chartreuse colors.

“These have been the most-effective baits out here in this deeper water,” Bergeron said, as he reeled in a nice speck in the 2-pound class.

Another boat was working around the opposite end of the rig, and I could hear them shouting with excitement so I knew they were into some action, as well.

I couldn’t resist the urge to toss a bait sans the cork, but after having to break my line off twice I gave up that idea and stayed with the cork rig.

Our next move was to venture farther into Hackberry Bay, where we worked our baits alongside a structure that could best be described as the Trash Pile.

It’s a long structure covered with oil-field debris, and there’s quite a bit of debris in the water alongside the rig, as well. Bergeron hung back from it a ways, positioning us near enough so we could cast alongside it.

The trout were there, too.

We got hammered by some very aggressive fish in the 2-pound class, and they hit our baits like it was summertime.

We caught fish until we filled our two man limit, and then we stayed awhile and played catch and release with the big fish.

Herk Bergeron said there are things you’ll need to know to break the trout code if your Barataria Bay trip is to be successful this month.

Bergeron said Manilla Village is best on a northwest or west wind because it gets protection from the land along the Barataria Waterway.

Any strong wind will nix Saturday Island because it’s in wide-open waters.

“Give the waves and winds time to settle and for the bottom to clear up. Remember: If the water is dirty, you will not catch fish.”

After catching a double-limit of speckled trout, but before calling it a day, Capt. Herk Bergeron wanted to run into the marsh between Grand Isle and Lafitte and make a few casts for redfish.

“Really, all you have to do is find marsh, look for clear water and fish points and cuts,” he said. “But the best tactic this month is to fish along the deeper canals at drains and cuts.

“The fish seem extra-spooky right now; that is, any noise at all tends to spook them. So I try to approach as silently as possible, and I tell everyone to move quietly in the boat. If you slam a hatch or splash an anchor, they’re gone.”

He said live bait is the best way to go.

“For bait, I like to use the biggest cocohoe minnow I can find and fish it right against the bank,” Bergeron said. “I only use a 1-foot leader under a popping cork, and I emphasize that you have to get that bait against the grass.

“If you are 4 feet off the bank, you are out of the strike zone.”

Our first and second stops failed to produce, but as we trolled slowly toward the cut that was to be our third stop, Bergeron’s first cast resulted in a hook-up.

The bite was typical in this shallow water. First, your cork slowly moves sideways because it can’t go straight down. As the fish commits to swallowing the bait, your cork will dip below the surface — that’s when you set the hook. Reds have hard mouths, so put some yank into the hook-set.

Bergeron said that, whether you fish with braid or mono, you don’t have be in a hurry to put the fish in the boat.

“Unless the fish is trying to get into some structure, like pilings, you shouldn’t horse it in,” he said. “Take your time, let it fight and enjoy the battle. That’s what you came for.”

Solari and his “goal STAR” trout

Bayou Lacombe heats up as water cools in October for bass and bonus fish. Corey LaBostrie, aka “Marsh Martian,” shares his top spots. […]

About Rusty Tardo 339 Articles
Rusty Tardo grew up in St. Bernard fishing the waters of Delacroix, Hopedale and Shell Beach. He and his wife, Diane, have been married over 40 years and live in Kenner.