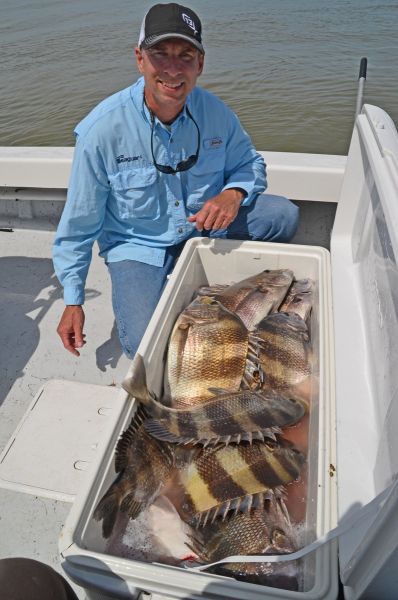 Speckled trout are, without a doubt, coastal marsh fishing’s glamour species. They are challenging to catch consistently but have liberal limits.

They are very willing to take artificial baits. And, of course, they are awesome table fare.

So why, I asked Kerry Audibert, would anyone want to make the long run from Shell Beach to Breton Sound to catch sheepshead, bull reds, and black drum?

He must have been rehearsing, because he had four quick answers:

1) During March and April, the speckled trout bite isn’t consistent anywhere. If you catch them in a spot one day, they almost certainly won’t be there — or at least they won’t be there biting the next day.

2) Calm weather conditions in the marsh, where the trout are this time of year, produce “flying teeth,” Audibert’s nickname for gnats.

“They are ferocious,” he said. “You may need a blood transfusion by the end of a trip.”

To top it off, he added, not many insect repellants work for gnats.

3) Sheepshead are the most underrated eating fish on the Gulf Coast.

“You can’t mess up a sheepshead,” Audibert said, smacking his lips.

4) It’s easy fishing if you are willing to make the 40-mile run from Shell Beach to the preferred satellite wells and platforms in 12 to 20 feet of water.

“Anything that has barnacles on it will hold fish,” was how he described his target spots.

And sheepshead are especially easy to target this time of year because they form large spawning schools.

“Sometime in March it just happens — they go nuts,” Audibert said. “When the pollen is coming off of the pine trees and pear trees are starting to bloom, the bite is on.”

Redfish, mostly all bulls, and black drum are there year round and add variety to the sheepshead catch.