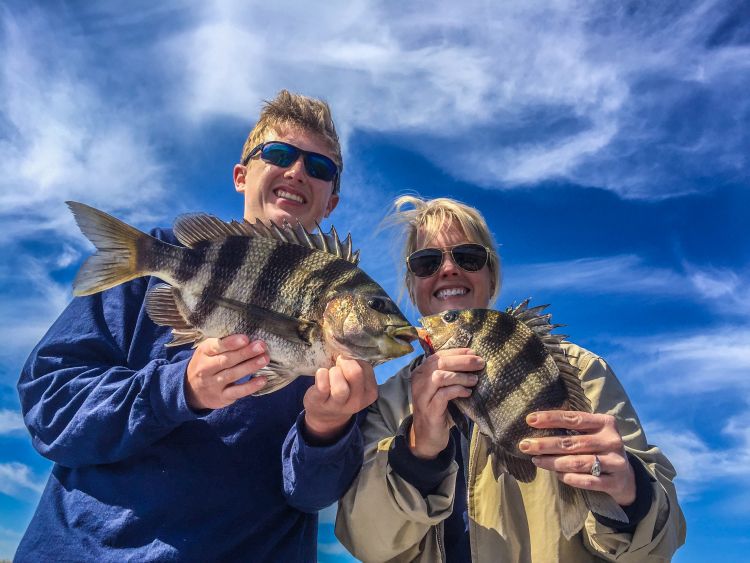 One of the many challenges of being a fishing guide is the pressure of putting clients on fish day in and day out, no matter the weather.

Many customers make long drives from out-of-town to come fish what they hear is the best saltwater fishery in the United States, so rescheduling trips isn’t really an option when clients have taken off work to spend a day on the water.

So ideal conditions or not, the fishing guide has to produce, and speckled trout certainly don’t open their mouths out of pity.

So on the days when the speckled trout get lockjaw, Dularge’s Capt. Marty Lacoste turns to a species of fish much easier to catch under adverse conditions.

“The sheepshead saved so many trips.”

And sheepshead are plentiful this time of year out of Dularge off of certain types of structure.

“Sometimes we fish them in shallow water over reefs on points under a cork,” Lacoste said. “If you can find the popier nets, you know it’s real deep.

“There are a couple places where we fish them in the middle of the bayou.”

The sheepshead strike dead shrimp in a variety of ways, so having sensitive braided line is a huge bonus, according to Lacoste.

“Sometimes they’ll hit it so soft you don’t even feel it,” he said. “You’ll be watching your line and you’ll see it start swimming off, so you know they picked it up.

“When it’s on fire, they inhale it before it even hits the bottom, and they’re pulling drag before you know it.”

If you like getting bites and catching fish every cast, don’t think twice about targeting sheepshead on days when the winds blow you out your trout hole.

In fact, those brutally cold days make it even better, according to Lacoste.

“In the wintertime, the colder the better,” he said. “Last year in November, I set a record on sheephead: We caught 72 of them.”

If you’ve ever cleaned a sheepshead, keeping 72 of them might seem stupid, however. Cleaning them is about as complicated as calculus, and you’ll likely be standing at the fish-cleaning table until dark.

However, this guide has found a knife that makes cleaning sheepshead almost as fast as speckled trout.

“We have the Rigid knife,” Lacoste said. “Before that knife came out, I had a boat limit of 10 sheepshead because I didn’t want to clean them. Now, that new knife is a game-changer.”

If you roll your eyes at the thought of catching sheepshead, Lacoste said you shouldn’t because there’s a lot to like about the species.

“They put up a great fight, you catch a ton of them and they’re good to eat,” he said.