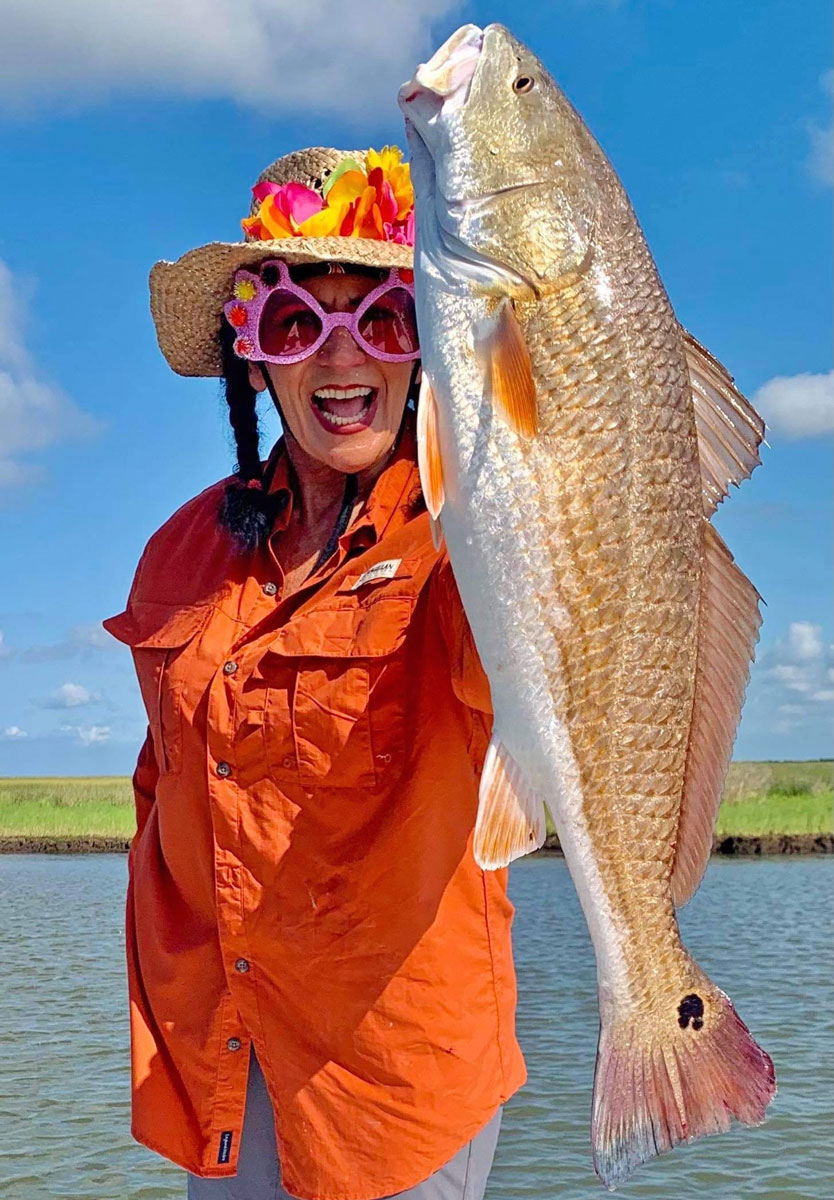 If you happen to see a woman wearing bright-colored clothing, a big, flower-festooned sun hat, and possibly some goofy sunglasses while fishing near Hopedale, be sure to sound your horn or wave “hello.”

You’ve sighted the “Hopedale Hat Lady,” known off the water as Sharon Hartzog, who has become a local personality over the years in Hopedale.

“I love to fish, and I love to fish in style,” she said, providing a useful glimpse into her spicy personality.

“At the marina in Hopedale, people know me as the hat lady,” Hartzog said. “They’ll always say, ‘Oh yeah, I remember the hat,’ because I’m always posting on the fishing blogs; it’s kind of funny.”

If you run into her at the marina, ask her about her accoutrement. She’ll tell you that her vibrant and outgoing color palette is her personality writ large for all the world to see — and you’ll believe her.

When she’s not on the water radiating cool-hat lady vibes, Hartzog is a semi-retired dental assistant living in Bogalusa with her husband, Jon “Bull” Hartzog, a retired Louisiana state trooper.

“I can talk my husband into matching (my clothes) except for the hat and flowers,” Hartzog said, chuckling.

The Hartzogs fish once a week when the weather allows it.

“The marina is actually about three hours from our house,” Hartzog said. “But, we get up early and we go; we love fishing.”

The Hartzogs target mostly speckled trout and redfish during summer, but as far as Sharon Hartzog is concerned, a fight with just about any species is welcome, as was the case last week when she caught a big jack crevalle in Lake Borgne.

“We went round and round in the boat!” she said. “It was one of those times where I thought, ‘that’s a giant fish, and I have to get him in this boat and get a picture with him.’”

The Hartzogs fish live shrimp under popping corks for specks and redfish.

“A lot of times, if we pull up somewhere and they’re hitting the live shrimp, we’ll quickly turn to plastics,” Hartzog said. “We’ll put plastics on there because (the fish will) go for anything if they’re hitting, and it’s easy to fish with plastics.

So, will the famous Hopedale Hat Lady ever hang her big, colorful, hat? Posed that question, her laughter seemed to cry out, “never.”  It’s become something of a totemic object to her. The hat has evolved season upon season to the present.

“Through the years, my hat has had flowers added (to match) all the different color shirts that I have (worn), and now it kind of matches them all,” Hartzog said. In doing so, it has evolved to match or mirror her, too.

“It’s really funny how people pay attention to that hat,” she said. “I’m the hat lady; that’s what they call me.”

Five-year-old Shiloh Pitre caught her first redfish by herself in Pointe-aux-Chenes on Oct. 19. […]